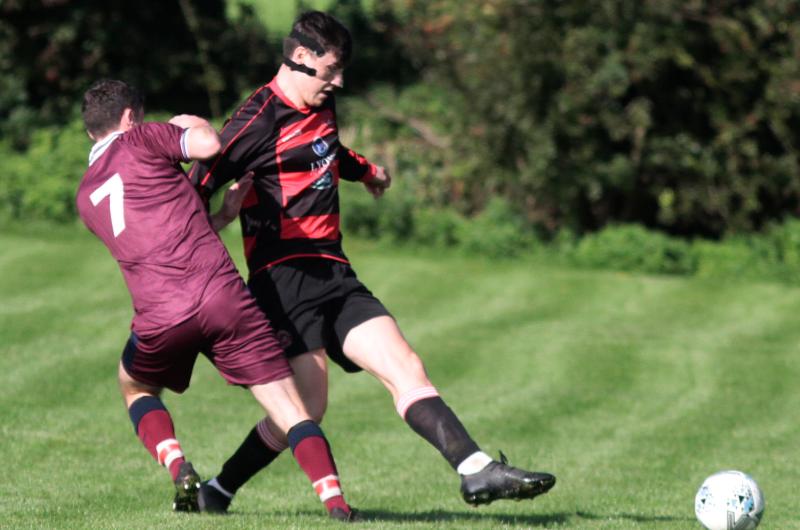 The shock of the round in the Munster Junior Cup came in the local derby when Coonagh hosted Shelbourne.

The Premier side were beaten narrowly by Ballynanty Rvs in the Tuohy Cup three days earlier and opted to rest a number of key players on Sunday.

They paid the price however when Division 1A side turned in a superb battling performance that saw them take a Premier scalp and set up a tilt with Ballynanty Rvs in Round three.

Languishing at the wrong end of the table in Division 1A, Shels went into the tie more in hope than expectation, but their young and spirited side put in a fantastic performance. Shels used the experience of a few of their B squad, with veteran defender Dean Herlihy producing an excellent performance alongside fellow centre back Max Klein.

The bulk of the winner’s squad came through the schoolboy ranks of the club which must have brought even further sanctification.

Frank Hogan was man of the match and it was only fitting that he grabbed the only goal of the game after ten minutes. Good work by Darragh Peters on the left flank created the opening for Hogan to score. Thereafter there was some defensive heroics by the visitors with ‘keeper Paddy Dowe superb throughout.

Pike Rvs were made sweat it out for a victory over a very impressive Parkville XI at the Pike Club.
The visitors were supposed to be there just to make up the numbers but they put that theory to rest after 30 seconds when Aidan O’Connor shocked the Premier big boys.

The Hoops struggled to break down the visitors who brought their lead to the dressing room at half time.

Pike took the chance to regroup and they produced a better second 45 minutes. Kyle Duhig equalised, heading in Ger Barry’s cross. Eddie O'Donovan put Pike ahead with a long range effort and a foul on Eoin Hanrahan gave Danny O'Neill the opportunity to convert a spot kick for the third goal.

Janesboro dealt comfortably with a game that could well have caused them problems. Dermot Hughes scored twice for the winners with Donie Curtin and Jack Fitzgerald also obliging. Jaiteh Kabba and Donal O'Doherty replied for Villa

As expected, Fairview Rgs advanced in the MFA cup with a comfortable win over a game Aisling C XI at the Fairgreen on Saturday evening.

Fairview Rgs B Granville B 1

While Fairview A’ face a second round game with Mungret, their B team await their club mates in round three after they defeated Granville B 5-1.

Ben O'Shaughnessy, an excellent signing by the Blues, opened his Fairview account with a hat trick. Leon Kirrane and Evan Ewanyabou also scored for the winners.

Mungret turned in one of their best performances of the season to date when they beat a good Summerville Rvs XI thanks to a seven goal haul.

The Southill derby produced an entertaining affair with Carew Park ensuring the game went to script with a 3-1 win.

The sides were level at the break but Carew upped the tempo after the break to pull away from the home side. Gary Griffin, Adam Dore and Mark McGrath scored for Carew, James Lyons replied for Southend.

Aisling Ann B 6 Charleville 2
Aisling Bee’s raised some eyebrows with the ease of their win over Charleville on Saturday evening.

Division 1B Leaders, Regional Utd B, fancied their chances of toppling Hyde Rgs on Saturday evening but the Division 1A side showed more grit to take the spoils after extra time.

Ben Kennedy came up trumps again with a double strike while Dylan O'Neill was also on the mark for the winners who now await the winners of Fairview A and Mungret.

Glenview just pipped Star in a seven gaol thriller at the county venue.

Barry Butler (2), Cian Cusack and Frank Lang were on the mark for the winners; Jason Daly (2) and Adam McInerney replied for Star.

Pike Rvs B showed great character to battle back from two goals down at Cappamore, to run out 6-2 winners.

Jamie Hogan scored two, along with scores from Darren Hanley Michael Lipper Damien Carmello and Pat Moloney to book their place in the next round.

Aisling D joined their B team in round three of the provincial Cup with a 2-0 win over Pallas Utd. Barry Madden and Alan Rositer were on target for the winners.

Geraldines picked up their first point of the season in a 2-2 draw with Prospect in Cals Park.

In a vital game for both sides, it was Prospect who broke the deadlock when Yakouba Yabre pounced in a goalmouth scramble.

Geraldines were back on level terms by the break after Booby Tier blasted home from a spot kick.
With the game evenly poised Eric Carr speculative effort crept in at the back post and it looked like the home side would take the spoils. However a great effort from ‘Dines produced a reward when Ousman Darboe blasted in the equaliser.

Ballynanty Rvs beat Kilmallock with ease to move three points behind the leaders in the Premier League.

The Premier side ran in seven goals. Matt Spain claimed a hat trick while Dan Butler netted twice. Kieran O'Brien and Saeed Ryan made up the winning tally. Jason Hanlon scored the Celtic goal from his goalkeeping position.