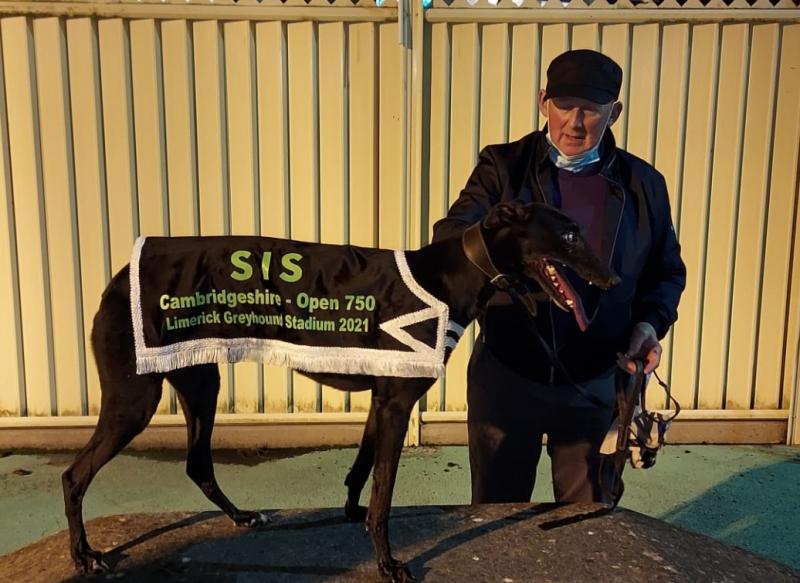 THE final of the SIS Cambridgeshire takes place in Limerick Greyhound Stadium this Saturday.

Dana Point, flew home to record the fastest of the two semis for the Mullins-Curtin-Syndicate, Gort last weekend.

Dana Point was at the tail of the field upon entrance to the back straight and she had over twelve lengths to make up on Glengar Bale out in front. However, creeping into contention at this point, Dana Point was absolutely flying approaching the bottom two bends and the marathon superstar was making rapid progress in her bid to reel in Jaytee Japan, who had now taken control from a tiring Glengar Bale, in second.

There was a certain inevitability about the result in the final fifty yards and although Jaytee Japan maintained his strong gallop, Dana Point was on another level as the daughter of Sparta Maestro and Blundel Spark, a 3/1 chance, powered to the front to cross the line three parts of a length too strong. Jaytee Japan ran a cracker in second, while a fading Glengar Bale just about held on for the third qualifying position. The time was a swift 41.89.

Redzer Ruinart was the fastest of the second-round winners last week and she followed that up with an off-the-pace performance in the opening semi-final.

Owned by Pat Reddan, Redzer Ruinart was installed the 5/4 favourite after a rapid 41.55 clock last time out and she came away well from trap five to be only headed by Bling Bling Emma, who took a flier from trap one.

Meanwhile, after being hustled out of contention in the opening yards, Newcastle Slaney, who has been noted staying on extremely strongly in recent outings, trailed the field and looked to have plenty on his plate in order to secure a qualifying position. Bling Bling Emma continued to hold a narrow advantage up top however, but she was to come under serious pressure from Redzer Ruinart who swooped the penultimate bend to now take control.

That move proved decisive for Pat Reddan’s bitch as she stayed on well thereafter to cross the line a length clear of Newcastle Slaney, who made up monstrous ground, to claim second. The time was 42.21 as Bling Bling Emma claimed the final qualifying position back in third.

Asides from the Cambridgeshire action last night, there was a sensational display from the Pat Guilfoyle-trained Magical Poppy as he dismantled her open contest to record a scintillating 28.19. A bitch who burst onto the scene with some serious clocks at both Limerick and Shelbourne Park, Magical Poppy has been in and out of open class company in subsequent races since, but she erupted last night to ensure she will be competing at the top table for the foreseeable future. Bolting from trap five, the Donal Guilfoyle-owned bitch recorded a 1.18 sectional as she flew into the opening corner clear. From here, it was one-way traffic for the strong running daughter of Confident Rankin and Cabra Twister as she dominated throughout to come home four lengths clear of Ballyelan Bingo and justify her even money price tag. The time, as mentioned, was a sensational 28.19.

There was another sparkling performance in race three as Airfield Oscar made it three wins on the trot for Bernadette Walsh.
A winner last time out in a very nice 28.82, Airfield Oscar trimmed several lengths off that clock with another polished display. Trained by Denis O’Malley, the son of Laughil Blake and Airfield Biddy showed first from trap three and it was lights out thereafter for his rivals as he set a scorching gallop throughout. The result never in doubt, Airfield Oscar was five lengths too good for Astra Eclipse as the clock returned a red-hot 28.47. An excellent performance for the 2/1 shot.

There was a lot to like about the performance of Mapogo in the opening race of the night as he made a winning start to his racing career for Michael Ryan. Running from trap three, Mapogo broke in front but was headed upon entrance to the back straight by odds-on favourite, Glengar Bandit. However, showing fine determination, the son of Ballymac Eske and Glideaway Babe, a 9/4 chance, struck the front once again and held off his rival in the closing stages to seal a neck win over Glengar Bandit. The time was 28.99.

The Julie O’Connell-trained Canavour Jim doubled his career tally in race seven as he finished best of all to dip under the 29-second barrier. Owned by John Lyons, Canavour Jim was forced to play second fiddle to Tallyho Angel as she led the field for large parts of the contest. However, sticking to his guns well, the son of Laughil Blake and Knocksouna Lady, a 3/1 chance, stayed on strongly to cross the line two lengths clear, in a nice clock of 28.90.

Indeed, there was a litter double in race nine for Laughil Blake and Knocksouna Lady as Boomin Stalker landed the Limerick & Clare GOBA A5 525 for owner Mark Lyons and trainer Julie O’Connell. Breaking best of all from his six berth, Boomin Stalker showed huge early pace and was well-placed to cause a 5/1 shock as he led the field into the opening corner. From here, Boomin Stalker maintained a strong gallop and he saw off Da Green Machine by three and a half lengths in 29.13. The winning prize was a good €750.

Demesne Soul was another to break 29-seconds in race eight as he came from off-the-pace to land the spoils. Owned by Jack Kelly, the son of Soul and Allhelletloose broke well from trap three and he took up the running at the penultimate bend from early leader, Geronimo, in two. From here, Demesne Soul, a 3/1 chance, pressed home his lead to cross the line two lengths clear of Hazelhill Moll, in a time of 28.93.