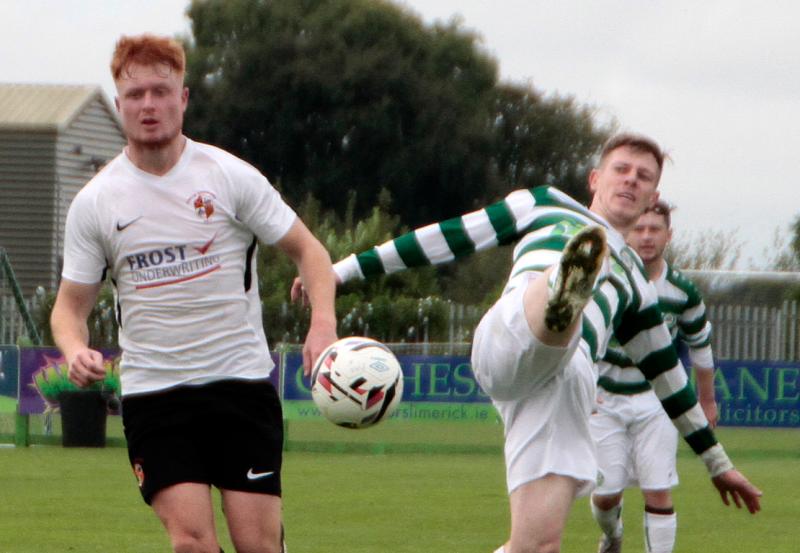 Pike Rovers advanced in the FAI Junior Cup at the expense of Aisling Annacotty in a thrilling encounter at the Pike field on Sunday.

Anyone lucky enough to have attended the game was treated to a thrill-a-minute encounter that kept the fans enthralled to the end. Pike showed great character, bouncing back from a two-goal deficit in the opening quarter.

The visitors took the lead again in the second half and it looked like it would be enough to see them through until a late controversial penalty sent the game to extra time. Thankfully the spot kick was not the deciding factor as Stephen McGann’s glancing header produced a winner worthy of any game.

Pike started slowly as Aisling new boy Tony Whitehead was controlling matters in the middle of the park. Alongside him Shane Tracey was in the thick of the action while the Aisling front runners, as usual, posed a serious threat every time they gained possession.

Once Pike got into their stride Eoin Hanrahan and Steven McGann were pushing and probing every time they got possession while Danny O’Neill was ever willing with numerous overlapping runs.

Aisling took the lead on fourteen minutes when Shane Stack raced on to Liam Quinn’s headed through ball and he kept his composure to fire across Gary Neville into the far corner. The visitors doubled their lead five minutes later when Adam Foley picked out Liam Quinn who worked his way in along the left and fired in at the front post.

The game was back in the melting pot midway through the half when Ger Barry picked up a superb Colin Daly pass to blast home from an acute angle.

The sides were back on level terms just before the break when the visitors cleared from a corner kick as far as Danny O’Neill who blasted a low shot through a crowded goalmouth and Nathan O’Callaghan got a touch to divert past Brian O’Connor into the net.

Strangely, when the sides emerged after the restart, Pike’s intensity, which saw them claw their way back into the game, waned somewhat, allowing Ailing back into the tie. The visitors took advantage when Quinn headed in his second goal from Shane Treacy’s free kick to make it 3-2.

Pike were reeling and Liam Quinn and Shane Stack had great opportunities before Aisling sub, Hugo O’hAnluain broke free of the Pike defence but his chip over Gary Neville struck the post. A minute later the same player was denied by a superb Neville save.

Pike looked bereft of ideas but the introduction of player manager Robbie Williams and Shane Walsh turned the tide back in their favour. Kevin Barry was introduced minutes later and his power and strength lead to Pike’s rescue.

With time running out a ball to Barry saw him fouled. Referee Robbie Broe awarded a free on the edge of the area but on prompting for his assistant reversed the decision and awarded a penalty. Needless to say, it proved vociferous protests from Aisling but when all settle Steven McGann tucked away the spot kick to ensure extra time.

Pike began the extra time on the front foot and got the break when Colm Walsh O’Loughlin played a sweet ball into the area and the inrunning McGann glanced a header into the top corner from 15 yards for a wonderful goal.

Aisling tried valiantly to get the equaliser but with Williams not dictating matters at the back there was no way through.

After last week's Munster Junior Cup defeat to Croom, Geraldines hosted Janesboro in the FAI on Sunday more in hope than expectation.

The Dines management team of Derek Hannon Bobby Tier and Christy O'Neill put their charges through their paces during the week and it seemed to be paying dividends as the home side started in fine fashion.

They opened the scoring on the half hour mark when Ousman Darboe slotted in from close range.
This lead was short lived as Boro’s Dermot Hughes hit a cracking shot that gave Adrian Duhig no chance.

On 40 minutes Geraldines regained the lead when Bobby Tier hit a 30 yard free kick that whizzed at pace past the Boro net minder.

Tier scored his second minutes later converting a spot kick to make it 3-1 at the break
Janesboro proved a different proposition on the restart and the home side were pinned back for the remainder of the tie.

When Conor Madden converted a spot kick to make it 3-2 on 67th minutes it looked like they would go on to save the tie.

In the 80th minute Dines keeper Adrian Duhig brought off a wonderful save to deny Conor Madden from point blank range.
Some stout defending ensured ‘Dines held on for their first victory of the season.

Moyross hosted FAI holder Fairview Rgs in the first round of their year’s competition and put up a brave performance before bowing out on a 5-3 scoreline.

Moyross found it hard to keep up with the Premier side early on as they raced into a three-goal lead. AJ O’Connor opened the scoring. Conor Coughlan converted a spot kick and Eoin Duff was also on target.

The second half showed the fighting qualities of Moyross and they pulled one back through Cian Power on 52 minutes.

With Moyross pushing forward they were hit with another couple of goals from Duff and Coughlan before Habideen Gbadebo scored two goals for the home side to add credibility to the scoreline.

Balla navigated a potentially difficult assignment with relative ease on Sunday, beating Newport 6-2 to progress in the FAI Junior Cup.

Thomas Byrnes and John Connery put Balla on their way before Christy Doyle pulled on back. Seamus Moloney made it 3-1 before the break. After the restart Connery scored again while Dara Hughes and Eddie Byrnes completed the winning scores. Luke Ryan scored Newport’s second.

Prospect Priory advanced in the FAI following a 4-1 win at home to Glenview.

Tyrique Leamy scored a double for the winners. Jack Cross and Robbie Kelleher were also on the mark while Sean Keane rep[lied for Rovers.

Another good win for Mungret saw them advance in the FAI following a 4-0 result against Herbertstown. Kieran Long, Cian McNicholas, Sean Ezkennagha and Pat Aherne struck the winning goals.

The gap between top flight and lower leagues was cruelly exposes as Regional breezed past a young Dromore side.

As expected Coonagh proved too strong for Abbey Rvs as they advanced to round two of the FAI. Goals from Eoghan O'Neill (2), Jack O'Donovan (2), Ger Myles, Mark Moylan, Ralph Leonard and Rory O'Neill did the damage.

Evan O’Grady, Steven Kiely and Shane Power were on the mark for Summerville but they went down 5-3 to Kilmallock.

Other games in the FAI Junior Cup saw Charleville edge out Regional United B with a last-minute goal from Cian McNamara. Luke Doyle was also on target for the winners. Jack O’Donovan replied for United.

Aaron Grant and Dean Hogan were on target for Southend Utd in an impressive 2-1 win over Premier A side Corbally Utd. Pearse Cunningham scored for United.
Vinny Ryan scored two and Brian O’Leary one as Pallasgreen saw off Shelbourne AFC while goals from Mark Tighe(2 ), Richard Pearse (2) and Ethan Hannon helped Parkville to a win over Lisnagry.

Joe Keane, Darragh Reddan, Aaron Madigan, Nathan Walsh, Conor Lynch and Jack O’Callaghan were on the mark as Granville eased past Castle Utd while Carew Park also eased into round two with goals from the returned Jonathan Grant (2), Mark Magrath (2), Gary Griffin (2) and Keegan Park following a win over Knockainey.

A bad injury to an Athlunkard player saw the Athlunkard Villa v Murroe game abandoned. A speedy recovery is hoped for by all.

With the side locked at 2-2, Holycross v Croom United was also abandoned at 85 minutes following a sending off.