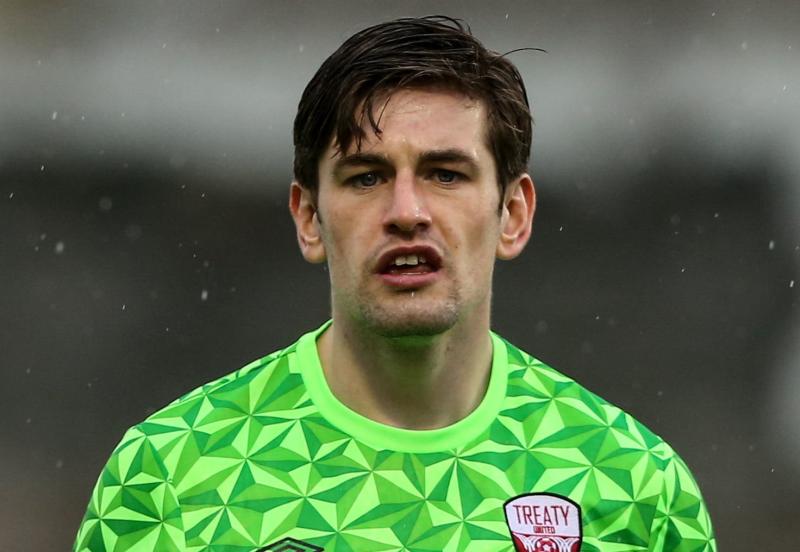 TEN-MAN Treaty United picked up a precious point in their bid to secure a SSE Airtricity League First Division promotion play-off place in a gritty 0-0 draw with Galway United at Eamonn Deacy Park on Friday night.

Treaty remain fourth in the table following this result. The Limerick-based side played the final 18 minutes of the contest with 10 men after Marc Ludden was sent off having picked up two yellow cards.

The visitors had to rely on a number of top drawer saves from goalkeeper Tadhg Ryan to claim a share of the spoils.

However, the Tommy Barrett-managed side did have an opportunity to snatch a victory late on only for Anthony O'Donnell's header from a corner to fly over the crossbar.

The share of the spoils laves Treaty Utd in fourth place in the First Division table, now four points clear of fifth-placed Bray who occupy the final promotion play-off spot.

Next up for Treaty United is a home fixture against Cork City at the Markets Field in two weeks' time, September 24 at 7.45pm.

Galway started the game in second place in the First Division table, just two points ahead of Treaty Utd.

Treaty Utd also secured a 1-1 draw with Galway at Deacy Park earlier this season and were narrowly beaten 1-0 by the Tribesmen at Markets Field in June.

Adding a degree of spice to the game was the fact that of their starting line-up, Treaty goalkeeper  Ryan, captain Jack Lynch, defender Marc Ludden and midfielder Stephen Christopher all played for the Terryland Park side in recent times.

For Galway, Newcastle West native Killian Brouder was in their starting line-up.

There was little by way of clear-cut chances created in the opening 15 minutes.

For the home side Ruairi Keating flashed a shot wide in the sixth minute, while Gary Boylan had a shot blocked following a long throw.

Treaty's Clyde O'Connell shot from distance for the visitors then flew wide in the 14th minute.

Treaty Utd's goal survived a dramatic goalmouth scramble in the 19th minute as the home side failed to capitalise on the first decent opening of the game.

Treaty's top scorer then came closer to breaking the deadlock a minute later when a signature long throw from Ludden into the Galway area was only partially cleared. Treaty then got the ball back, Fleming and O'Connell linking up to get the ball back into the box. However, McSweeney's header flew narrowly wide.

The see-saw nature of the game continued just after the half hour mark when David Hurley set up Mikie Rowe. However, his fiercely struck shot from inside the penalty area was blocked by an alert Treaty Utd 'keeper Tadhg Ryan.

Two minutes before half-time, Ryan was called into action again and he was up to the task, stopping Joe Gorman's effort, before gathering the loose ball in the nick of time ahead of the in-rushing Wilson Waweru.

The game remained scoreless at half-time. Visitors Treaty were the better side through the third quarter.

Treaty created a good goal scoring opportunity on the hour mark, but the goalbound header off Marc Ludden's corner from the right ended up being straight at Galway 'keeper Dennison.

Despite Treaty holding the upperhand, it took a superb stop from Treaty netminder Ryan to prevent the home side from hitting the front after 67 minutes.

Following a neat build up on the left Ruairi Keating sent in an inviting cross and Waweru turned in an instant before flashing a terrific effort goalwards. However, an alert Ryan did superbly to block the close range effort before the danger was eventually cleared.

Treaty were dealt a big blow five minutes later when Marc Ludden was sent off, picking up his second yellow card of the game.

With their one-man advantage, Galway came close to opening the scoring in the 78th minute, but the alert Ryan thwarted the home side again with another fine save, this time from Mikie Rowe.

To their credit, Treaty managed the game really well through those closing minutes and Anto O'Donnell headed an effort from a corner on the left over the crossbar in the 90th minute.

*A minute's applause was observed before kick-off as a mark of respect to former Limerick FC and Galway Utd defender Samuel Oji who passed away aged just 35 due to illness recently. Oji played for Limerick in the 2013 and 2014 seasons.