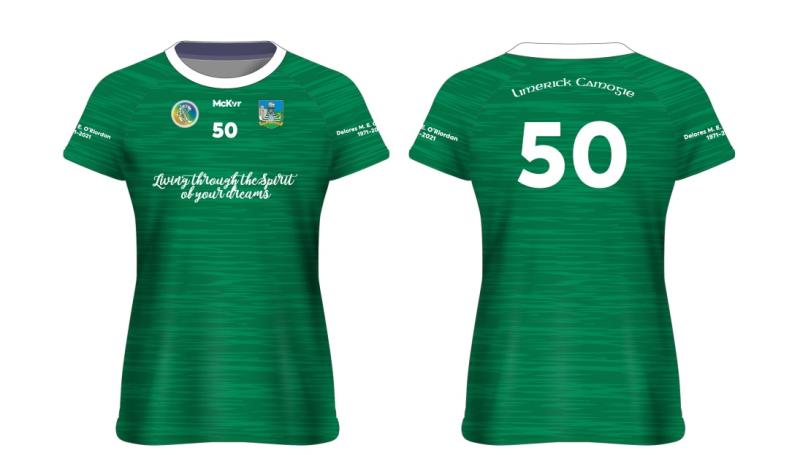 A new specially commissioned Limerick camogie jersey has been launched to mark the 50th birthday of The Cranberries' star Dolores O'Riordan.

The limited edition jersey is to be auctioned for charity.

The initiative is the brainchild of Cranberries Italia, the official community of Italian Cranberries fans.

"2021 marks a very important year, because it would have been Dolores O'Riordan's 50th birthday and our community has come up with a project to pay homage to this anniversary. In collaboration with the staff of the Limerick Camogie team and with the precious collaboration of McKeever Teamwear, we have created a commemorative jersey dedicated to the Limerick's star Dolores O'Riordan," explained Paolo Catena of Cranberries Italia.

"A very limited number of jerseys will be made: only 10 pieces, some of which we will try to auction to raise funds for social and volunteer projects related to the camogie team and sports activities in the city of Limerick, and in part for the #italialoveslimerick project."

Known worldwide as the lead singer of The Cranberries, Ballybricken native Dolores O'Riordan did actually play camogie during her days in Laurel Hill.

The front of the special jersey is embellished with the words: Living through the spirit of your dreams - lyrics from 'Ordinary Day', the lead single taken from Dolores O'Riordan's debut album, Are You Listening?

"A shirt will also be donated to Dolores O'Riordan's family as a testimony to the deep bond that binds it to the Italian Cranberries fans," added Paolo Catena.

In 2001, Cranberries Italia was born as a web space for meeting and exchanging information on the band, it was then consolidated, also carrying out many offline activities: meet & greet with the band, choreography and bus trips on the occasion of the Italian concerts, previews of upcoming albums, participation in radio and television broadcasts, fan meetings held in various Italian cities.

"Following the tragic death of Dolores O'Riordan, Cranberries Italia has promoted an initiative with social purposes in her memory: this is how the #italialoveslimerick project was born, still active through donations from fans, to finance musical
educational activities within of the Learning Hub in Limerick, hometown of the Cranberries," outlined Paolo Catena.

Further information is available via email to info@cranberriesitalia.it