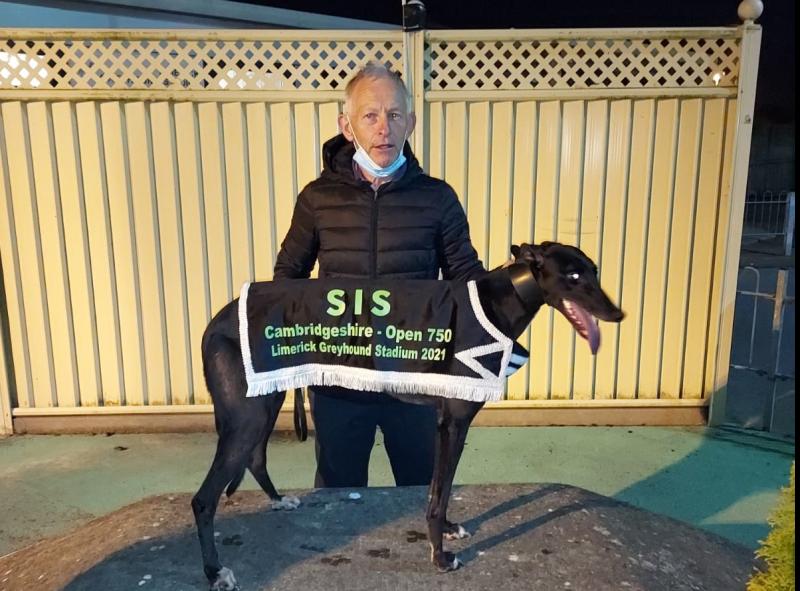 THE SIS Cambridgeshire in Limerick Greyhound Stadium continued at a high standard on Saturday night as Redzer Ruinart recorded the quickest clock of the second round heats.

Running in heat two of the night, the Pat Reddan owned Redzer Ruinart doesn't find herself in front at traprise on too many occasions, but she came through the bars of five last night to sweep the opening bend and take a three-length lead into the home straight first time around.

The daughter of Kinloch Brae and Redzer Ruby, a 4/1 market chance, got stronger as the race progressed to draw clear in the closing stages. Storming across the winning line, the clock was a blistering 41.55 as Jaytee Japan was seven and a half lengths back in second. Of the others, Tinnock Solis and Bling Bling Emma claimed the final two qualifying positions in third and fourth respectively.

In the opening heat of the night, Great Name That built on his promising six-bend debut last week to run out a comfortable winner for the Very-Quiet syndicate. Trained by Kerry trainer Liam Dowling, Great Name That broke well, and he took control early on.

With the outcome never in doubt, the winner stayed on well enough to cross the line three and a half lengths clear of the fast-finishing Newcastle Slaney in second. The time was a good 41.67 as Glengar Bale took third with Ballintuber Cain claiming the fourth qualifying position.

If heat two proved a routine victory for Redzer Ruinart, the final heat of the night resulted in a procession win for the Denis Crowley-owned 6/1 chance, Mixed Model. Running from trap four, Mixed Model was only moderately into stride as Slippy Kemp showed his rivals a clean pair of paws early on to shoot clear. Taking a four-length lead into the home straight for the first time, Slippy Kemp was setting a fine gallop in front as Mixed Model brushed aside Dana Point to emerge as his nearest threat down the back straight. The race was to change context on the back straight however, as Mixed Model galloped menacing alongside Slippy Kemp and Crowley’s charge breezed to the front at the penultimate bend.

From here, it was a straightforward victory for the daughter of Laughil Blake and Ravenswood Emily as she galloped to a ten and a half-length victory over Dana Point, who stayed on well for second.

The time was fast 41.78 as Slippy Kemp and Tyrap Ferage also booked their spot, finishing third and fourth.

There was a terrific display in race eleven as Ocean Ringo made a winning return to racing action for owner Tom Fitzgerald.
A huge 85-pound tracker, Ocean Ringo broke swiftly from trap two and he disputed the early lead with Parody before taking charge at the opener. Holding a two-length lead down the back, Ocean Ringo was under pressure throughout from Parody, who was keeping the leader honest, out in front. However, Ocean Ringo, a 6/4 chance, showed fine determination to hold off Parody by three parts of a length at the winning line. The time was a rapid 28.72.

Give It Holly got the night off to a fast start as she provided Dan Clancy with a nice win in just her second start. An October 19’ daughter of Out Of Range and Goes Wilder, Give It Holly showed impressive early gears from trap five and she developed a healthy lead to come home four and a half lengths clear of Victorious Girl in second. The time was a good 28.94 for the 5/1 market chance.

The quickest time over the two-bend trip came in race nine as Astra Swift justified his even money price tag to come home clear. Jointly owned by Paudie Keane and John Stackpool, Astra Swift was chasing back-to-back wins and although led early on by Cuala Kid, the son of Droopys Jet and Moanteen

The action continues this Saturday night at Limerick Greyhound Stadium.