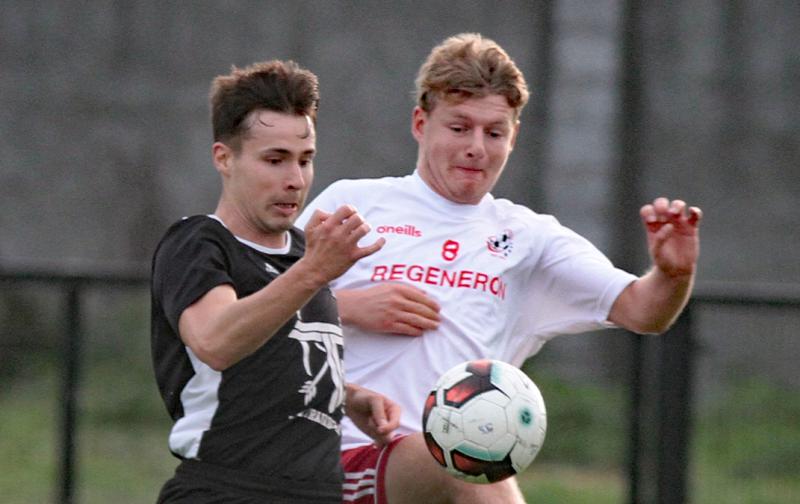 Croom Utd produced the shock of the day in the Munster Junior Cup when they knocked Premier side Geraldines out with a 3-2 extra time win at Garryowen on Sunday.

Geraldines, struggling to find their feet in the League, looked to be on their way when Shane Byrne converted a spot kick on 16 minutes. However it was all square five minutes later when Dylan Moloney scored for the visitors.

Zac Mursal restored ‘Dines advantage before the break but on the hour mark Dylan Murphy restored parity for Croom.

Extra time was required to separate the sides and it was the county side who prevailed thanks to Dylan Murphy’s second.

A very young Corbally XI had no answer to a bang in form Fairview side in Athlunkard.
AJ O'Connor, deployed in midfield position fired in a quick fire hat trick in the first half and thereafter it was just a case of how many the Premier side would tack on.

The only all-premier tie went to script with Janesboro putting four past bottom side Kilmallock.
David Hannon scored a double while Conor Madden and Scott Mitchell also chipped in with goals.

A first half hat trick from Aaron Nunan put paid to the Patrickswell challenge versus Ballynanty Rvs. Darragh Hughes, John Connery, Adrian Power and Eddie Radcliffe were also on the mark for the Premier team while John Collins scored the goal of the game with an outrageous 35 yarder for the ‘Well’

Mungret Regional eased into round two of the provincial tournament with a 3-0 win over Nenagh B. Goals from Evan Barrett, Marcus Finucane and Cian McNicholas ensure a date with Summerville in Round Two.

The game that many though could produce a surprise went to script with Premier outfit Nenagh seeing off Moyross by two goals at the Tipperary venue. Matt Spain and Paul Costello were the winning goal scorers.

Like the Aisling tie, Regional proved way too strong for Villa and rtan in goals by Kieran O’Connell(5), Ewan O’Brien(3), Donal O’Connell (2) and Jack Arra (2).

Carew Park eased past Summerville Rovers B to set up a clash with neighbours Southend. Keegan Park scored twice, with Jamie O’Sullivan, Jonathan Grant and Darren Naughton also getting in on the act.

Colin Haigney, Dave Doherty, Cian Enright and Jerry Flavin were on the mark for Castle Rvs but they fell by the odd goal to Granville Rangers B. Alex Fitzgerald scored three with Jake Murphy and Lee Downes making up the winning tally.

Granville’s A string were not as fortunate as they came up against a good Mungret B side. An own goal and a double from Kuba Cieloch did the damage.

Dave Ryan scored for Murroe AFC but they went down to Pallas whose goals came from Alan Wallace and Vinny Ryan.

Star Rovers A beat Corbally Utd B 7-3 thanks to scores from Jason Daly who claimed a hat trick and Adam McInerney and Grant Butler netting two apiece. Rian Barrett, Robert Clancy and Richard McMahon replied for Corbally B.

Rumours of Holycross' demise were thankfully unfounded as they proved on Sunday when they beat Caherdavin Celtic 2-1 thanks to goals from Tony Burke and Ross O’Brien May. Alan Neill replied for Celtic.

Liam Danagher (2), Barry Madden (2), Gavin Byrnes (2) and Manni Ajuong scored for Aisling Annacotty D in a 5-5 win over Caherconlish for whom William Hourigan, Gary Murphy 2, Conor Martin and an own goal replied.

Hyde Rgs got back to winning ways with a 5-1 win over Meanus FC. Evan Shine scored three with Sean Dooley and Dean Casey also netting.

Newport were back to their best when they saw off Newtown by 4 goals to one.

Keith Mawdsley scored two while Elliot Slattery and Brian O'Sullivan also netted for the winners.
Regional B turned in another fine display beating Lisnagry 5-1. Jeff Mannion and a four goal haul from Gerry Fitzpatrick accounted for the winning scores.