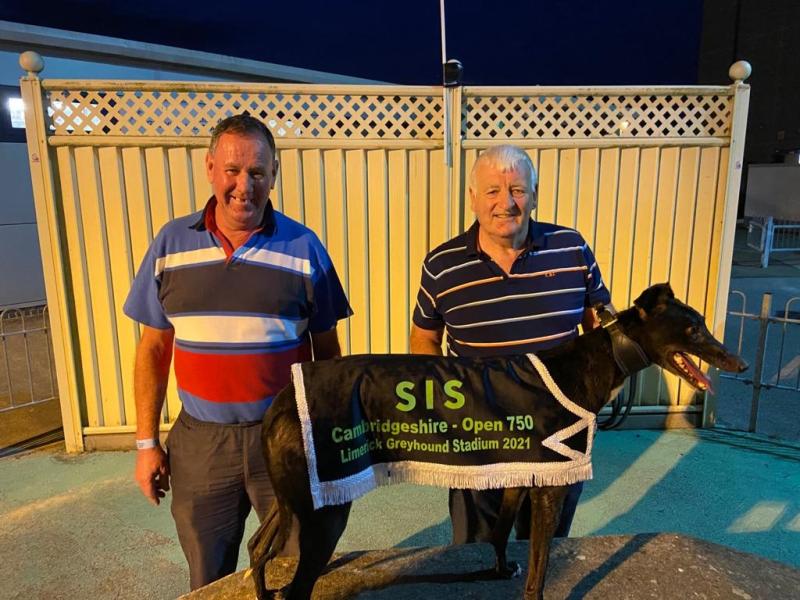 THERE was a new track record set in Limerick Greyhound Stadium last Saturday in the opening round heats of the 2021 SIS Cambridgeshire Open 750.

Owned by Eddie Goodall and trained by Jerry Griffin, Roaming Mystery put on a spectacular performance to win in style.

As expected, it was Great Name That who was installed the 4/5 market leader and he showed first from trap one to set a scorching gallop for large parts of the event. Posting a quite brilliant 12.99 sectional, the Liam Dowling trained charge had built up ahead of steam as a number of runners, including Roaming Mystery, began to wind up in behind.

Roaming Mystery was really beginning to motor between the bottom two bends however, and the daughter of Good News and Coolavanny Kelly overcame a four-length deficit to storm to the front late on and cross the line four lengths clear of Great Name That in second. Redzer Ruinart was next best back in third as the time returned a sensational 41.40, over six lengths faster than any other heat. (Sec 13.31).

Tinnock Solis was an eye-catching second behind Jaytee Japan at Shelbourne Park last weekend and he duly stepped up further to land the opening heat of the night in comfortable fashion. The son of Pat C Sabbath and Glenlee swooped the turn to immediately open an unassailable lead over his rivals. Staying on very strongly thereafter, Tinnock Solid crossed the line eight lengths clear of Slippy Kemp in second, as Ballintuber Cain came through well to land third. The time was a fast 41.85. (Sec 13.19).

Heat three of the night was landed in trap-to-line fashion by the Marion Moloney-owned Allegra Blue as she justified her 7/4 favouritism with a fine maiden performance over the trip.
Allegra Blue set her stall out early as she developed a two-length lead over Bling Bling Emma rounding the opening turn. There was little to separate the duo thereafter as Bling Bling Emma ensured she kept the leader honest throughout, while never really threatening to overturn the gap. Allegra Blue showed no signs of easing off as she maintained a powerful gallop all the way to the winning line in crossing over two lengths clear of Bling Bling Emma in second. The time was 41.87 as Mixed Model claimed third. (Sec 13.20).

Heat four was billed as a two-dog affair between Ballymac Wisdom and Jaytee Japan and it materialized as the duo could only be separated by a photo-finish. Entering the back straight and Ballymac Wisdom loomed alongside Jaytee Japan but despite her best efforts, the latter kept pulling out a little extra and on the run for home, John Turner’s charge looked like he might just hold on. However, Ballymac Wisdom (Definate Opinion - Coolavanny Angie) is a hardened performer and she came back for more once again in the closing stages to just pip Jaytee Japan on the line. A head separating the duo in what was a very exciting contest, the time was a good 41.86 as Tyrap Ferage claimed third. (Sec 13.38).

The final heat of the night was another close affair with just a neck separating Redzer Regera and Almighty Paddy. Rounding the bottom two bends it was apparent that Glengar Bale was beginning to run on empty and although still holding a healthy lead entering the home straight, both Almighty Paddy and Redzer Regera were making serious inroads as the winning line loomed large. Holding her inside line however, it was Redzer Regera (Kinloch Brae - Redzer Ruby) who stormed to the front in the dying strides to deny Almighty Paddy, as Glengar Bale, after setting a frantic gallop throughout, was forced to settle for third place. A fine display by Redzer Regera, the time was 41.99 for the 3/1 market chance. (Sec 13.45).

Aside from the Cambridgeshire action, the final of the €1100 to the winner, Slippy Cian @ Stud Novice 525 was also down for decision and after winning on each of his last two starts, Jerrys Stag made it three from three in the decider.

Kindly sponsored by the Racenight Kennels, the final itself was only a four-dog affair Jerrys Stag going off the 2/5 favourite to land the spoils. Breaking well from four, Jerrys Stag whipped a bump early on and had to do things the hard way as Cree Loch led the field into the back straight. However, Jerrys Stag stepped it up a gear at halfway and he stormed past Cree Loch at the midway point to take full control entering the final two bends. All one-way traffic thereafter, the son of Droopys Cain and Clounbrane Kerry flew over the line to record a three-length victory over Cree Loch in second. The time was a rapid 28.79 and many thanks are extended to the Racenight kennels for their sponsorship of the event.

Minaun Flyer produced a devastating display in race eight as he ran to a comfortable success for Gordon Vaughan. Quickly into stride from trap five, Minaun Flyer showed brilliant early gears to clear the corner and it was lights out for his rivals thereafter. Drawing clear down the back, the son of Droopys Cain and Droopys Dream raced to a six-length success as the clock returned a terrific 29.56 for the 550-yard trip.