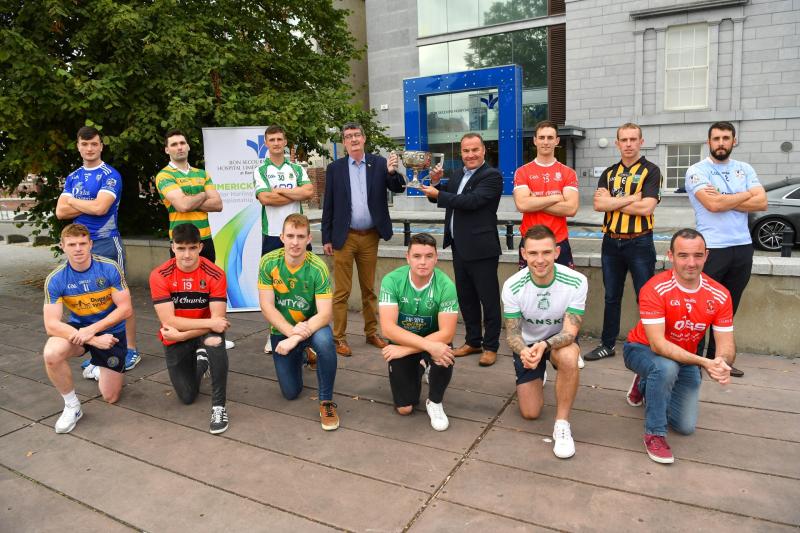 The launch took place outdoors at the hospital at Barringtons.

"As ye all know the club is very very important - it is where it all happens and where it all takes place. I wish ye all teams and supporters the very very best and may the best team win," said Bon Secours Hospital Manager Jason Kenny.

"I am delighted that we are teamed up again with Bon Secours Hospital for a third year. They have become very valued sponsors of our blue riband competition," outlined Cregan.

"We are looking forward to a great championship and there are some tasty fixtures commencing next weekend," said the chairman.

The continued partnership between Limerick GAA and Bon Secours comes on top of the existing relationship between the two that sees the hospital provide quick access to Limerick senior players for MRI and Xrays to ensure quick and exact injury diagnosis and, in turn, allows players to embark immediately on their recovery programme.

There are four round one group games - one each day - from this Thursday to Sunday. See full fixture details here

Champions Na Piarsaigh have won six of the last 10 championships and have been installed as the 8/15 favourites to again lift the Daly Cup.

Patrickswell, winners in 2019, are second favourites with the bookies at 9/2.

Adare were recently crowned county senior league champions and they are next in the betting at 16/1, followed by Ahane at 25/1 and Ballybrown at 33/1.

Next in the odds are newly promoted Kildimo-Pallaskenry at 40/1, followed by Monaleen and South Liberties both at 50/1.

Garryspillane and Blackrock are seen as the bookmakers outsiders of the field of 12 - priced at 100/1 each.