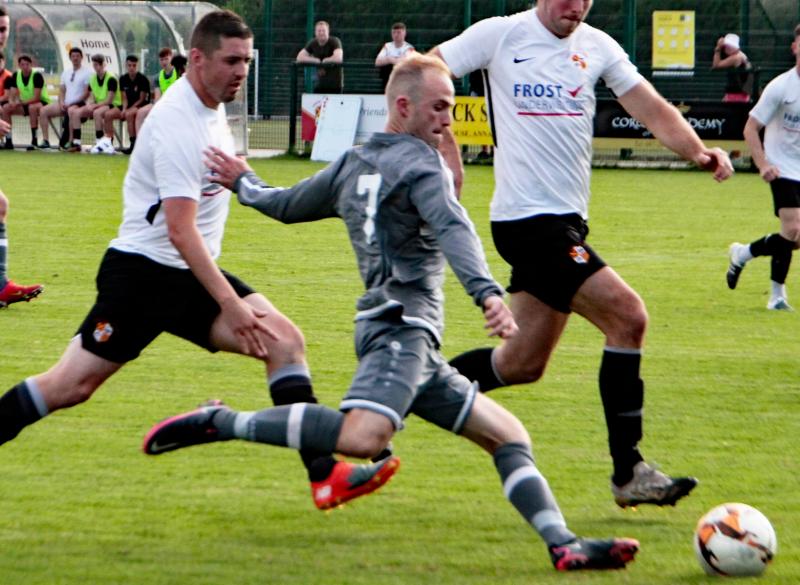 Mungret Reg 1 Pike Rvs 2
Pike Rovers maintained their 100% record in the Premier League but had to work extremely hard to edge past a dogged Mungret Regional XI in Mungret.

The sides were deadlocked at 1-1 and Pike were looking bereft of ideas on how to break down the Mungret defence, when Pike manager Robbie Williams introduced Colin Daly and Colm Walsh O’Loughlin. The pair combined to unlock the home defence with ten minutes to play to secure three valuable points.

Richie Burke’s Mungret young side showed courage aplenty and as well as solid defending, they were causing the Hoops defence plenty of bother. While their efforts deserved something from the game, it was the experienced visitors who showed how to close out the game.

Pike took the lead when Adam Lipper bravely headed in Shane Walsh#s delivery from a free kick. The home side were not thrown however, and they were back on level terms when Kian Barry’s snap shot from outside the box flew to the back of the net.

The second half saw Pike upped the intensity but Mungret were standing firm and you felt they would hold out. However, the introduction of Colin Daly gave them a cool head in possession and he created the chance to allow Walsh-O’Loughlin to head in from close range

Aisling maintained parity with Pike Rvs at the top of the table with a big win over Geraldines in Garryowen.

It’s been a difficult start to proceedings for Geraldines and once Blake Curran put Aisling on their way it was an uphill fight.

The joint leaders led 3-0 at the break and piled on the mkisery after the restart.

Shane Clarke and Shane Stack claimed two apiece while Liam Quinn and Shane Donegan made up the winning tally. Evan Waters scored for Geraldines just after the restart.

In the second period Coughlan tacked on a second while the prolific AJ Moloney also scored.

Following a defeat to Regional in midweek, the Blues were determined to get back on track and they opened in style with an early goal through Jake Dillon.

Eddie Byrnes tacked on a second before half time.

Injures and a lack of substitutes hampered Prospect's hopes and they conceded again when Byrnes scored his second to complete the scoring.

Regional Utd 1 Coonagh Utd 1
Regional and Coonagh shared the spoils in Dooradoyle. The visitors took the lead when Martin Deady converted a spot kick following a foul on Ger Myles.

It looked like it might be enough to claim all three points, but in the final minute Jack Arra struck an equaliser to win a point for his side.

Nenagh AFC 3 Kilmallock 3
It was also a draw in the final game when Nenagh and Kilmallock shared six goals.

Paul Costello, Matt Spain and Eamon White were on the mark for Nenagh. Kilmallock, without a point prior to kick off, got off the mark thanks to scores from Paudie Sheedy (20 and Barry Sheedy.