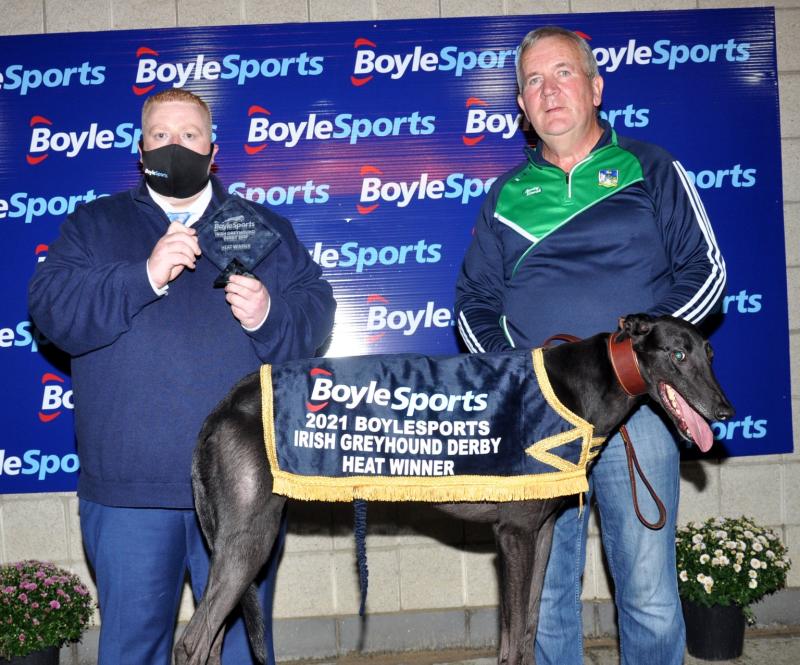 There were many brilliant displays, a few shocks, some controversy, and a couple of great storylines.

Limerick was well represented by Noel Neenan would have skipped back to Kilmallock after another brilliant display from Athlacca Zette. He ran out a tremendous winner of Heat 12. Maintaining a strong gallop to the finish, the talented black emerged a comfortable two length scorer over the staying on Skywalker Cilla in 29.56. Kilbannon Psycho ran a fine race to finish just a half-length adrift in third.

Back on the home front at Limerick Greyhound Stadium, the stage was set for several outstanding performances on Saturday night.

Head and shoulders above all was Magical Mary who burst onto the racing scene in spectacular fashion for leading trainer Pat Guilfoyle. Running in the night’s opening race, Magical Mary came into the ON2 contest fresh off an impressive 29.31 qualifying spin around the tough Galway circuit but no-one, except connections, could have envisaged what was to follow from the March 20’ whelp. Heading to traps a red-hot 2/7 shot, there was nothing spectacular about the opening couple of strides from Magical Mary as she broke only moderately from trap one to post an average 1.45 early doors.

However, showing immediate acceleration to storm past Malbay Theo on the run to the first turn, this lady was clearly a class above her rivals and the remainder of the contest was a thing of beauty from Pat Guilfoyle’s newest prodigy.

Rounding the opening bend clear, it was a procession for the daughter of Droopys Jet and Mystical Moll thereafter as she drew clear of her rivals, clocking a sizzling 16.12 to the penultimate bend. Maintaining a scorching gallop all the way to the line, Magical Mary was fourteen lengths too good for nearest rival, Killaheen Mac, as the clock read a scintillating time of 28.10.

Patrick Guilfoyle described this bitch as ‘very special’ on Talking Dogs TV last night and that is quite a statement from a man who has handled some of Country’s finest trackers and numerous Classic winners in recent years.

Seldom has a greyhound produced as impressive a debut as Magical Mary did at Limerick last night and hailing from a pedigree that includes the likes of super-broods Sizzling Sarah and Nifty Niamh, not to mention a dam who is a full sister to Magical Bale, this bitch, certainly ticks all the right boxes. Watch this space in the coming months! Asides from the terrific performance of Magical Mary, the semi finals of the Slippy Cian @ Stud Novice 525 were down for decision and for the second week on the trot it was Jerrys Stag who set the standard. Owned by the Crossofwood-syndicate and trained by Patrick O’Connor, Jerrys Stag (Droopys Cain - Clounbrane Kerry) clocked 28.64 on debut.

A 5/4 chance on Saturday night, Jerrys Stag broke in front from trap one and the writing was on the wall for the remainder of the field as he developed a healthy advantage from an early stage before crossing the line nine lengths clear of nearest rival, Cree Loch, in second. Oh Oh Rapido managed to take third and the time was a slick 28.55.

In the second semi final Lubagh Range followed up his eye-catching debut last week to grab his first win for owner Gus O’Keeffe.

An even money chance at the off, Lubagh Jet was perfectly housed in red and he trapped much sharper this time around to see off Snuggie Brandy entering the opening turn.

Setting a solid gallop down the back, the son of Out Of Range and Cructa Jet was never under any pressure and he duly crossed the line three and a half lengths clear of Vigorous Cherry in second. The time was 29.14. With the SIS Cambridgeshire scheduled to start next Saturday night, there were a couple of novice 750’s on the card and best of these was Cloondarone Lady.

Owned by Owen McDonagh, Cloondarone Lady broke well from trap five and although steering a wide course for the majority of the marathon contest, she was never too far off the pace.

It was Crickleowl Stan who took charge at the opening corner but despite his best efforts, he failed to hold Cloondarone Lady as the daughter of Droopys Jet and Droopys Breeze finished well to win by a neck at the line. The time was 42.37.
Prior to that, Ballintuber Cain proved too strong for his rivals as the Michael O’Regan-owned dog justified his 6/4 favouritism.

It was Banter Blitz who strung the field out early doors from trap three but the strong-running Ballintuber Cain took charge at the sprint box. From here, the heavyweight son of Droopys Cain and Treaty Lady pulled clear and he had three and a half lengths in hand over Hannon, who ran on well to grab second. The time was 42.56.