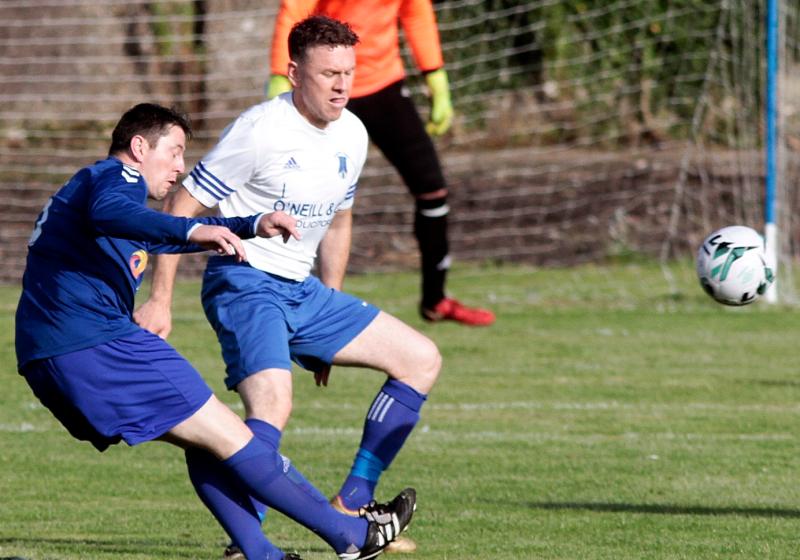 Action from the meeting of Prospect Priory and Fairview Rangers in the Premier Division on Thursday night Picture: Brendan Gleeson

THE 2021/22 Premier League kicked off tonight, Thursday, and Fairview Rangers had to dig deep to see off a battling Prospect XI in their opener at Cals Park.

Few gave Prospect a chance but when Jack Cross gave them the lead the game took on a different look.

Josh O’Rahilly scored a second for the home side but ‘View held on for the points.

Pike Rovers also posted a good start with 4-0 victory over Janesboro, current holders of the Fran Mullally Trophy. Robbie Williams' side proved too strong for a young Boro XI running in goals from Conor Layng (2), Eoin Hanrahan and Ger Barry.

Ballynanty Rvs continued on from where they left off last season with a 5-0 victory over Geraldines in LIT.

A beauty from distance by Jake Dillon gave Balla a half time lead. Two goals from corner kicks after the restart put paid to the Dines challenge, Aaron Nunan and Adrian Power obliging. Eddie Byrnes made it 4-0 an an own goal made up the tally.

Coonagh were the surprise packet in last season’s short lived season. They began their campaign tonight by hosting Nenagh but suffered a heavy defeat against an impressive Tipperary side. Eoin Coffey, Bryan McGee, Kieran O’Brien and Dylan Kennedy were on the mark for the visitors. Coonagh replied with a penalty scored by Martin Deady.

Aisling Annacotty and  Regional Utd played out an entertaining game in Annacotty with the spoils going to the home side on a 3-2 scoreline.

Ewan O’Brien put Regional in front, cancelled out by a Shane Clarke penalty after the break. Kieran O’Connell restored the visitors lead before Adam Dore opened his Aisling account to make it 2-2.

With the evenly poised Shane Stack struck the winner to seal the points for the home side.

In the final game in the top flight Kilmallock had a disappointing start to proceedings going down at home to Mungret Regional. The visitors under Ger Burke had the perfect start scoring four without reply from Eoghan Ryan (2), Kieran Long and Pa Aherne.