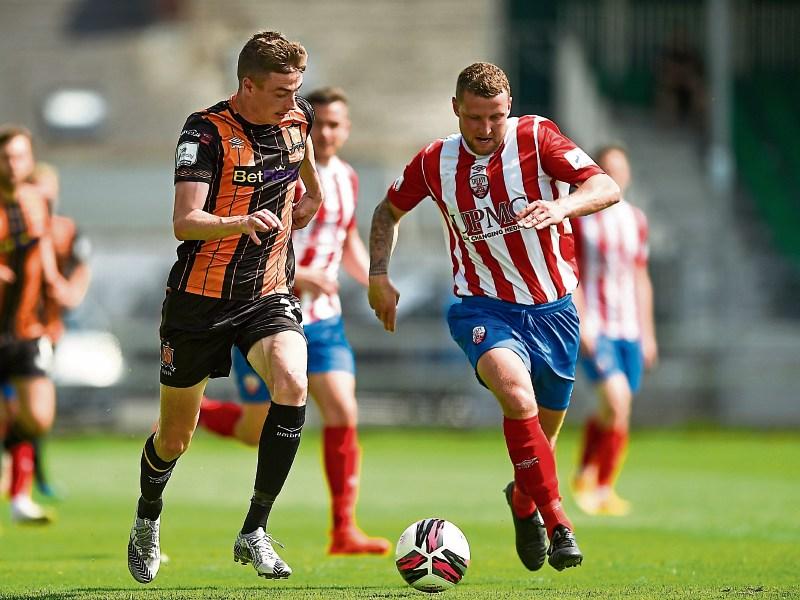 Treaty United manager Tommy Barrett was “very proud” of the performance and effort shown by his side as they exited the FAI Cup at the first round against holders Dundalk.

Patrick McEleney’s extra-time strike proved decisive and despite a good showing from keeper Tadhg Ryan, Barrett felt that his side gave as good as they got.

“I don’t think (Tadhg Ryan) was under severe pressure. If you look at the first half, he had a couple of basic saves to make and I think we had the best chance with Joel (Coustrain). The second half they were camped in our half but I felt they were going to beat us with a set-piece or through McEleney and that proved to be it.”

“I felt they were hanging on, even against 10 men, at the end of extra-time. Tadhg did well but there were a couple of breakaways at the end, but I’d expect him to save them.

The red card shown to Anto O’Donnell will prove costly, and the decision frustrated the Moyross native.

“I think it was harsh. Those decisions seem to be going against us all year. I thought it was a yellow, probably, but even at that he got the ball and the man runs into him. I looked back at it on the video and it even looks harsher on that. But, look, the referee gives what he sees, that’s all he can do.

“It was a bit of a scruffy goal, but it is hard to concentrate when you are up against a good team. I’ve very proud of the lads, we are newly formed, only 21-22 weeks ago. So to put it up against a team of that quality and the financial backing that they have is a massive boost for us.”

Barrett also confirmed that Adam Foley and Shane Lowth are to depart the squad, with both returning to junior football.

Treaty are in third spot, eight points ahead of their sixth placed hosts this Friday night. (7.30pm Athlone Town stadium)

Treaty have three wins, a loss and a draw from their last five games, while Athlone have picked up just five points.

Athlone were knocked out of the FAI Cup last weekend too, falling to Waterford on penalties.

Tommy Barrett's men got the better of Athlone Town this season, winning the round eight tie 1-0. Treaty will once again be favourites this weekend to claim a road win.