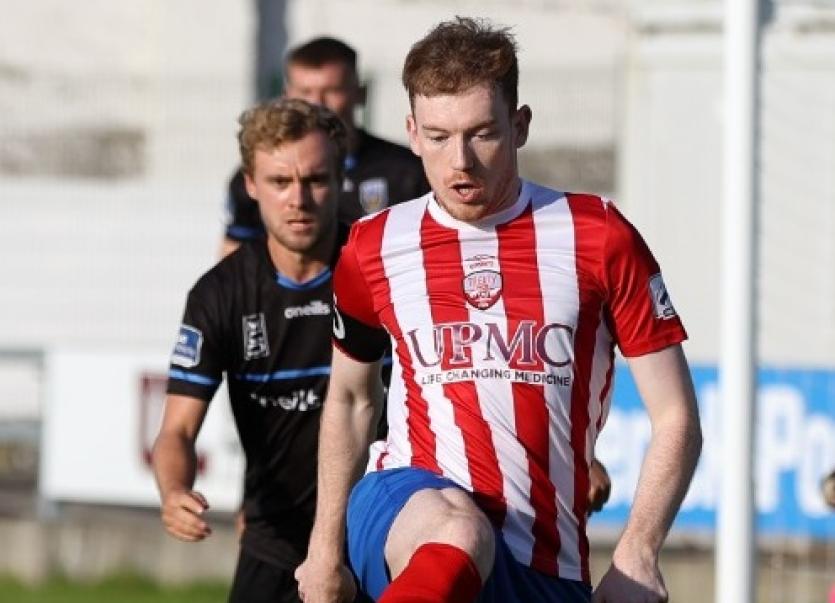 TREATY United turned up the heat on their promotion rivals in the SSE Airtricity League First Division on a sultry July night at Markets Field as two goals from captain Jack Lynch fired the home side to a precious 2-1 win over UCD.

Lynch scored on 28 minutes and 56 minutes as Treaty won the battle of the third and fourth-placed sides on a balmy night to open up a four-point lead on the students.

UCD had equalised in the 54th minute from a Colm Whelan penalty, but parity only lasted for two minutes as Lynch volleyed home a precious winner from Matt Keane's excellent cross.

The result also takes Treaty's haul of points to 13 from a possible 18 as Tommy Barrett's charges strengthened their promotion push.

Next up for Treaty United is a glamour first round FAI Senior Cup tie with Premier Division heavyweights and 12-time Cup winners Dundalk at the Markets Field. The game is expected to be fixed for Sunday week, July 25 with an afternoon kick-off.

In Treaty United's starting line-up, Willie Armshaw, who scored a stunning late equaliser against Shelbourne seven days earlier,  made his first start for the home side.

Mark Walsh started for Treaty for the first time since April, while Clyde O'Connell returned to the line-up after suspension.

New signing Stephen Christopher, who joined the Limerick-based side during the week from Galway United, was included on the substitutes' bench.

Home side Treaty began the game in impressive fashion, knocking the ball around confidently on the manicured playing surface.

Treaty threatened to open the scoring after five minutes when Charlie Fleming headed a Marc Ludden corner goalwards, only for the ball to be headed off the line by a UCD defender.

A confident Armshaw looked dangerous every time he gained the ball wide on the left, ever willing to take on the UCD right back and the Cappawhite man even produced a cheeky nutmeg in the opening 15 minutes.

Treaty supporters were baying for a penalty in the 18th minute when Kieran Hanlon was fouled by Sam Todd as he got in behind the students' defence. However, match referee Patchell judged the foul was committed just outside the area. Hanlon's resultant free-kick flew high over the crossbar.

The home side then deservedly hit the front after 28 minutes. Ludden created the opening when a well-directed diagonal ball and Treaty captain Jack Lynch glanced the ball home for the game's opening goal.

Just before half-time, Treaty manager Tommy Barrett sprung new signing Stephen Christopher from the substitutes' bench to replace the lively Armshaw, who appeared to pick up a knock. Armshaw got a great ovation from the home support in the stand as he came off the playing pitch.

Out of nothing, UCD equalised nine minutes into the second half. Callum McNamara was judged to have fouled Liam Kerrigan inside the visitors' penalty area and the referee had no hesitation in pointing to the spot.

A composed Colm Whelan coolly converted from the spot to bring the students level.

Kieran Hanlon held the ball up well before finding Matt Keane. Keane swung in a delightful cross and the alert Lynch volleyed the ball home for his second of the night and a 2-1 lead for the home side.

The home side came agonisingly close to wrapping up the three points in the 83rd minute only for Clyde O'Connell's rasping effort to come crashing back off the butt of an upright.

McKevitt fired the rebound goalwards, but his shot was deflected over the crossbar for a corner which was eventually cleared to safety.

At the other end UCD posed a threat and Tadhg Ryan did well to get to the ball before Liam Kerrigan in a foot race for possession.

Treaty had to get through five minutes of injury time and more before securing their eighth win of the campaign, but hold on they did,  much to the delight of the 200 very satisfied home supporters.