Limerick Cricket Club lose out to Cork in T20 fixture 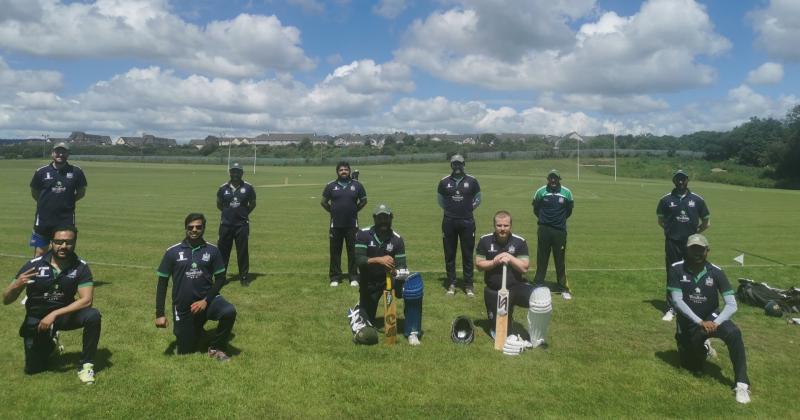 SUNDAY entertained us to a make or break encounter for Limerick as they took on Cork Harlequins in a must-win game in Farmer’s Cross.

In a game that ebbed and flowed, Limerick found themselves in a real spot of bother in their run chase until Digamber Mishra hit some late boundaries to push the game to the very edge.

With 15 or so runs needed in the last over, Limerick kept pushing to the last ball and fell just short, ultimately losing the game by just 5 runs.

Conditions were favourable to bowling with overcast clouds and few patches of blue in Cork as skipper Arslan Anwar won the toss and decided to bowl, going against his usual decision of batting first.

It was a very bright start for Limerick with Mishra bowling Kruger for a golden duck to get Limerick off to the perfect start. Shani Alam followed his counterpart in with some tidy bowling from the other end, but Quins too advantage of the power play to accelerate their innings.

Limerick got Shivam at 57-2 at the end of the 6th over but couldn’t find their next break through until 17th over, a crucial aspect of the game as Limerick couldn’t break down what turned out to be a match-winning partnership for the home side.

Breaking into the opposition tail was a dictating point in Limerick’s victories in the last two seasons but the difference for Quins was keeping their batsmen at the crease to thwart the Limerick bowling attack.

Moreover, Limerick were the architects of their own downfall in the field, arguably gifting 30 runs in the 20 overs which made a crucial difference to the away side’s target with Limerick needing 170 from their 20 overs to win.

Unlike last weekend’s victory in Midleton, Limerick could not cement a solid foundation to their innings as Quins were able to put a squeeze on the top order from the outset.

As Limerick lost wickets, to important aspect which kept them in the game is that they did not ‘waste’ deliveries as most batsmen maintained a strike rate of around 100 or so. A 58-run partnership between Digamber Mishra and the returning Sarfraz Ramay ensured Limerick a fighting chance in the final few overs.

The Shannonsiders pushed until the last over and continued to hit boundaries to keep themselves in the game. Usman Khan’s 21 off just 15 balls almost stole a miraculous victory for Limerick but even a boundary four off the final delivery left Limerick 5 runs short of the target, finishing with a respectable total of 164-8.

Work on the basics to do for sure before Limerick’s final T20 game of the season against Cork County in the Mardyke next Sunday. With no league title to play for, Limerick may have one eye on the limited overs competition which starts the following week.

Elsewhere, Limerick 2nd XI were not able to bounce back from their loss to Quins the week before as they went down to Nenagh in similar fashion in Ballyeighan on Saturday afternoon, ironically enough also losing by a margin of just 5 runs.

Ajay Hari’s side conceded 140-6 and fought hard to salvage any chance of a victory in the final over, but Nenagh bowled well enough to keep Limerick at bay and out of touching distance.

South African Victor Van Der Schyff was the key figure again, finishing with figures of 2-31 and making 26 off 27 deliveries with the bat.

With all other games called off due to the weather condition, it was just the 6th XI who were left to play on Saturday afternoon.

They continued their fine run of form with a six wicket victory over Waterford on Saturday afternoon to put them in second place and keep their Division Three title hopes alive.