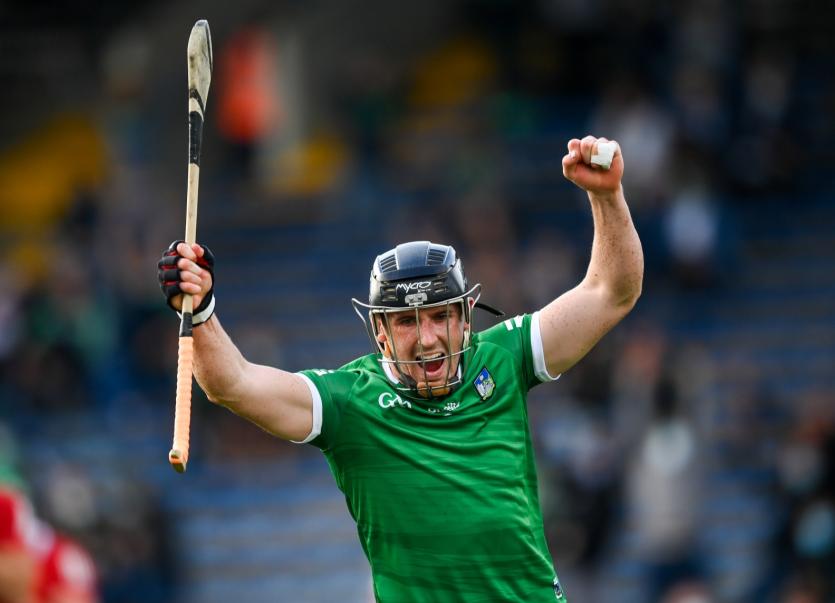 LIMERICK survived a stern test from Cork before booking their place in the 2021 Munster senior hurling championship final.

John Kiely's side now play Clare or Tipperary in the July 18 provincial final as they go in search of a first hat-trick of Munster SHC titles since the 1930s.

The eight point win came despite Limerick hitting 20 wides, which was five more than Cork.

It was an opening half in which Limerick had 10 wides, two more than those in red.

Crucially Nickie Quaid saved a 25th minute penalty from Patrick Horgan and it appeared to spur his team-mates.

Despite losing Peter Casey to a blackcard for 10-minutes in the penalty incident, Limerick were level for the first time four minutes later after successive points for Cian Lynch - 0-8 to 1-5. Indeed while Casey was off, Limerick out-scored Cork 4-2.

The sides swapped scores until it was 0-10 to 1-7 and as Peter Casey returned two minutes of injury time were announced.

In a flash Limerick had two goals to lead for the first time in the tie.

Limerick had made the early running with three Aaron Gillane frees and a neat Peter Casey point helping then 0-4 to 0-2 ahead on 11-minutes.

Then in the 15th minute came the Cork goal - Shane Kingston finding the net as the sliothar evaded numerous defenders in a crowded goalmouth.

Seamus Flanagan pointed from distance but Cork maintained their lead with Seamus Harnedy among those on the mark.

Then came the penalty but Quaid saved low from Patrick Horgan to keep it 0-6 to 1-5 and 25-minutes played.

Lynch then stepped forward with a quick-fire double to tie up the contest.

It looked set to go to half time level until the late Limerick goals.

Darragh O'Donovan scored the first goal in the 36th minute and two minutes later Kyle Hayes had another goal to send the men in green six points clear at the break.

The six point lead was still intact at the second half water break on 52-minutes.

William O'Donoghue, Diarmaid Byrnes and Casey had the lead out to eight points but Cork hit back.

There were two points from Gearoid Hegarty in this period but perhaps most telling was a flick from Sean Finn 11-minutes into the new half when Patrick Horgan had goal on his mind.

On the resumption, Cork cut into the lead with sub Shane Barrett leaving four between the teams with 15-minutes to play.

Byrnes and subs Graeme Mulcahy and David Reidy had points to ensure no late Cork dramatics as the final score showed an eight point win.