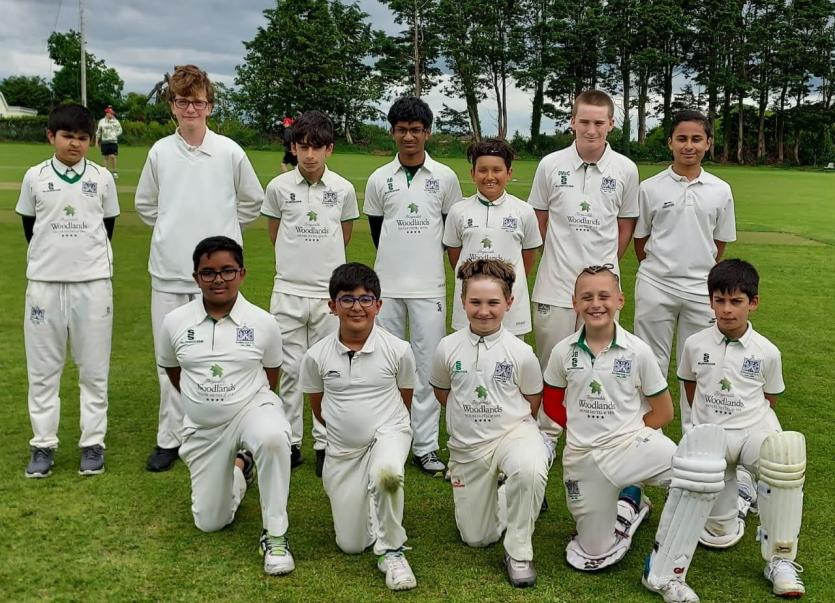 Limerick Cricket Club U13 side

SOME of you may remember Allison Becker’s recent miracle goal for Liverpool in the dying moments of their Premier League encounter with West Brom. The goal meant Liverpool, although remaining outside top 4, were guaranteed a top 4 spot if they were to win all their games.

Limerick CC were no different yesterday. Their win against Midleton and a loss for Cork Harlequins against Kerry shakes up the table with Limerick playing Quins and County in their final two games; winning both those matches would leave Limerick with just the one loss from their entire campaign.

The conditions could not have been more optimal at Midleton RFC as skipper Arslan Anwar won the toss and elected to bat first. There were two changes to the starting XI this week with Ajay Hari replacing Asif Hussein and Farman Yousafzai coming in for John Daly. Australian-born Tim Smithies wasn’t finding similar form from last season thus far but perhaps the crucial potential of the game acting as a catalyst for an improved performance.

Despite the loss of Azeem Khan early on, who was unlucky to find backward point in the third over, Smithies paired with Anwar at the crease and two set the perfect foundation for the final 10 overs.

The two rotated the strike to ensure an effective left- and right-hand combination and managed to find boundaries in almost every over. Smithies would fall just shy of his 50 on 45 (7x4s and 1x6), cementing a 92-run partnership with Limerick on 111-2 at the end of the 13th over.

With license to free the arms, the middle order chipped in with some useful boundaries with Arslan eventually being dismissed for a very significant 70 from 43 deliveries at 140-6 after 18. Limerick scampered to 156-8 leaving a 157 target for the home to chase.

There would be early fireworks for the away side as Midleton got off to a rocky start in their run chase. Shani Alam was once again the benefactor to the batting side’s downfall as he got the dangerous Jose George caught behind second ball. Midleton’s other opener Majid Khan was then trapped LBW in the same over to leave them on 5-2 with a very uphill task.

Limerick chipped away with wickets coming at important intervals to stem any potential momentum from the batting side who struggled to find boundaries as the run rate continued to rise. All looked lost with the fall of Syed Aiman in the 14th over at 94-6,but 3 consecutive 6s directly following the wicket meant the game was still in the balance going into the final five overs.

Khashif Javed was given a lifeline when he was dropped in the 15th over but his race was finally ran when he was caught plum LBW by Digamber Mishra as Limerick closed out the game to eventually win by 18 runs.

We defeated Midleton by 18 runs today.

There were mixed results elsewhere for Limerick CC with the 2nd XI going down to Quins on Saturday afternoon, losing by just five wickets in the second last ball of the game. Stephen Hackett became just the third player to reach the 100 cap mark [joining Shane Burke (122) and Asif Shahab (107)] for Limerick CC, unfortunately the result wasn’t to follow as Ajay Hari’s side struggled to find the Achilles’ heel in the home side’s batting selection.

We lost to Cork Harlequins by 5 wickets yesterday.

Limerick’s 6th and 5th XIs completed back-to-back wins at the Castle Grounds in Lismore on Saturday as they both shot up to the top of the Division Three table. Stand-in skipper Yogesh Borghare making his first half-century for the club with a match-winning 80 to give the 6th XI a 45 run win to ensure maximum bonus points.

There were debuts on the day for youths Alan McCutcheon and Cormac Welch, Cormac would go on to pick up his first senior wicket with his first delivery of his very first over! A great way to start off your senior career for both players in a big win away from home.

Sumukh Venkatesh was the star of the show for the 5th XI; his unbeaten 64 was a super knock to give his team a big total of 175-6 at the end of their 20 overs. Venkatesh would then continue his heroics with the ball, finishing with figures of 3-4 from his spell as Prithiv Mohan’s side picked up maximum points with a 71 run win.

It wasn’t to be for the 3rd and 4th XIs who went down to the Limerick Blasters and Cork Harlequins respectively, leaving both teams around the mid-table mark in Division Two.

The final win for the club came early on Saturday morning with the LCC u13s picking up an emphatic 10 wicket win over Quins u13s in Farmer’s Cross. Skipper Dan McCarthy lost the toss but piled on some real pressure with Quins only able to make 71 runs form their 20 overs, Skandan Lakshmaman picking up two wickets.

The captain then lead from the front with the bat, he partnered Ayan Ullah at the crease who would retire on 25* leaving his team in a very comfortable position. Zaki Khalid then finished the job off with his captain, the two finished on 10* and 16* respectively as Limerick chased down the total in 7 overs.

The 1st XI take on Cork Harlequins in a crunch game at senior level this Sunday whilst the 3rd and 4ths will battle it out against one another later that afternoon in what should be an entertaining affair in Adare.