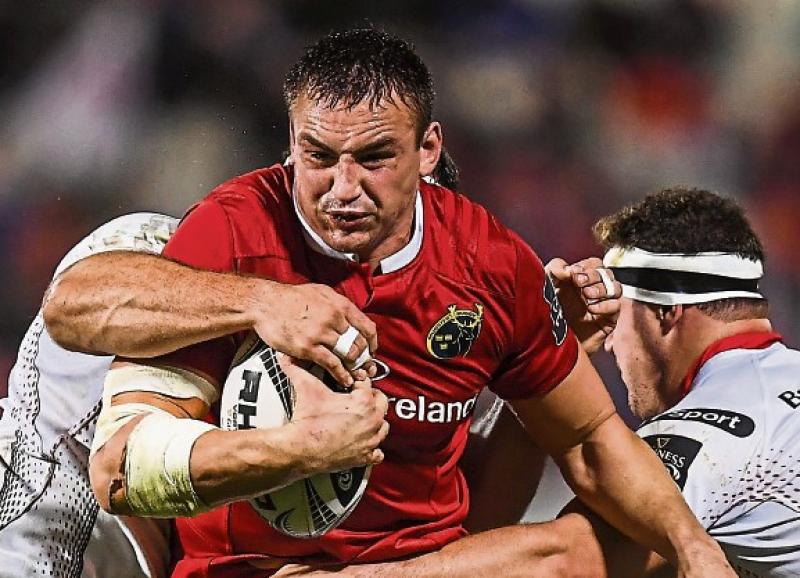 ON a balmy summer evening in northern Italy, Munster's ultimately frustrating season came to a conclusion.

The last rites on the 2020/2021 campaign was performed by the retiring Billy Holland as his conversion attempt flew left and wide in a runaway Guinness Rainbow Cup victory over Zebre in Parma.

Munster scored eight tries at the Stadio Sergio Lanfranchi in thumping hapless Zebre 54-11, but unfortunately the Irish province's fate in terms of hoping to reach the inaugural Rainbow Cup final this weekend was sealed once Benetton's fixture with Ospreys was cancelled due to positive Covid-19 cases in the Ospreys squad.

As a result of the cancellation, Benetton Rugby received the four match points on offer and qualified for the Guinness PRO14 Rainbow Cup decider on June 19. A tough way for Munster's hopes of reaching the final and an opportunity to compete for some badly-needed silverware to end, but ultimately the disappointing home defeat to Connacht in an earlier round fixture proved crucial.

Munster will bid farewell to a number of key players this summer. New Zealand hooker Marshall, prop James Cronin, scrum-half Nick McCarthy, out-half JJ Hanrahan, and winger Darren Sweetnam, who departed in March for La Rochelle, won't be with the province next season, while the trio of Billy Holland, Tommy O’Donnell and CJ Stander are retiring from the game. It's a hefty number of players to depart the scene.

Munster's season had promised much on the back of their excellent away win over Clermont Auvergne in the Heineken Champions Cup and a series of impressive displays in the PRO14.

However, arch rivals Leinster once again had Munster's number when it came to the PRO14 decider and despite a highly encouraging first half showing, eventual winners Toulouse ultimately proved too strong for Munster in their Heineken Champions Cup last 16 meeting at Thomond Park at Easter.

There will, no doubt, be plenty of soul-searching done in the Munster organisation in the coming weeks and months as the province faces into the the newly launched United Rugby Championship.

Munster haven't won a trophy since their brilliant 19-9 win over Leinster at Thomond Park in the Celtic League Grand Final on May 28, 2011. It's a long time.

The province will sincerely hope that sport in Ireland is in a position to welcome back full houses to fixtures in the autumn and winter months. There is the obvious financial boost from ticket sales with the prospect of supporters being allowed return to games as well as the boost the side gets from being cheered on by their passionate fans.

Munster has very much missed not being able to play in front of a sold-out Thomond Park, especially during the big Heineken Champions Cup and PRO14 fixtures. The absence of fans has robbed them of the opportunity to bid farewell to Munster's departing stars.

The players leaving the province this summer have been fans' favourites and it is unfortunate that the Red Army won't get the opportunity to bid farewell to them as they depart.

Billy Holland played his 247th and final game for Munster Rugby in Friday night's victory over Zebre in Parma. The thirty five-year-old has called time on a distinguished career spanning 14 seasons that saw him become Munster’s second most capped player of all time.

In a post on social media, Holland wrote: “Having played rugby since the age of 5, it is hard to believe I have finally played my last game.

“It has given me fantastic friends, memories, highs, lows, pain, elation and the opportunity to play for @munsterrugby Running out in a packed Thomond park, full of spine tingling energy from the best fans in the world is a privilege I will be forever grateful to have experienced.”