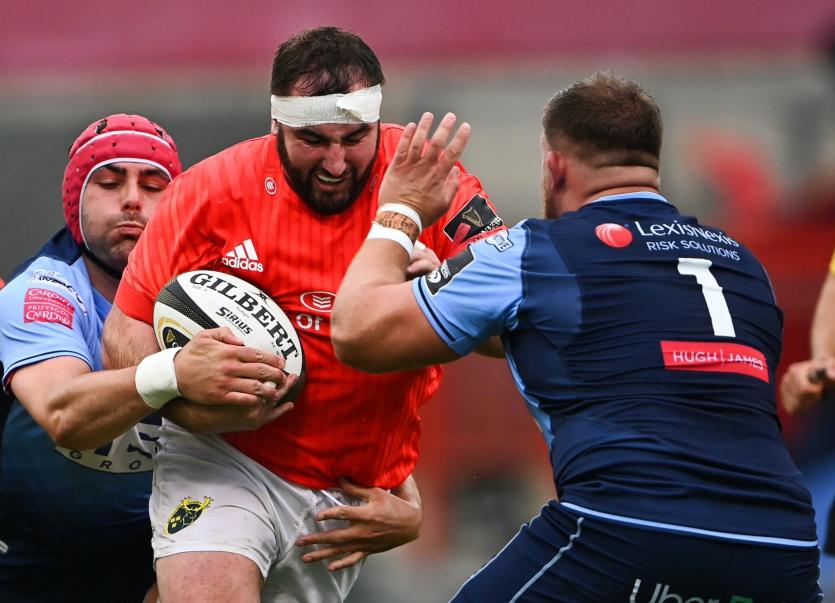 Munster Rugby recorded a 31 to 27 win over Cardiff at Thomond Park this evening, putting them back on top of the Rainbow Cup standings, for 24 hours at least.

The first half, played in perfect conditions, was a half of 'two halves' - Munster found themselves down by 10 points after just 18 minutes. A Tomos Williams try was converted by Evans, before the 10 added another three from the tee.

However a rapid fire double from Niall Scannell and Fineen Wycherley left the hosts in front in the space of five minutes. It was to get better for Munster before half time as Niall Scannell crossed again for a five pointer, converter by Joey Carbery, making it 21-10 at the break.

The blues would start the second half as they began the first. Another Tomos Williams try saw them get back to 21-17, before Carbery restored order with a penalty to extend his side's lead to seven.

When Mike Haley was sin binned in the 54th minute for a no arms tackle, Cardiff took advantage and raced back into the game. Sub scrum half Lloyd Williams crossed the white wash (converted by Evans) to even the scores, while a penalty from the fluid kicking out half put the visitors into a 69th minute 27-24 lead.

Munster needed a reply to save their season and they were duly rewarded for their efforts when Kenan Knox crossed for his second try of the season. Munster now led 31-27. However the drama was not over yet. With the clock two minutes into the red, Cardiff were awarded a penalty. The game looked like it was going to come down to one last play for the Blues. That was, however, until CJ Stander put forward a 'captain's challenge'

Lloyd Williams was adjudged to have kicked the ball back into his own ruck, a free kick offence and once the TMO Olly Hodges confirmed it, the game was over and Munster moved on to the top of the table. Next up for Munster is a June 11 away trip to face Zebre in what might become, depending on other results, a virtual semi final for the men in red.