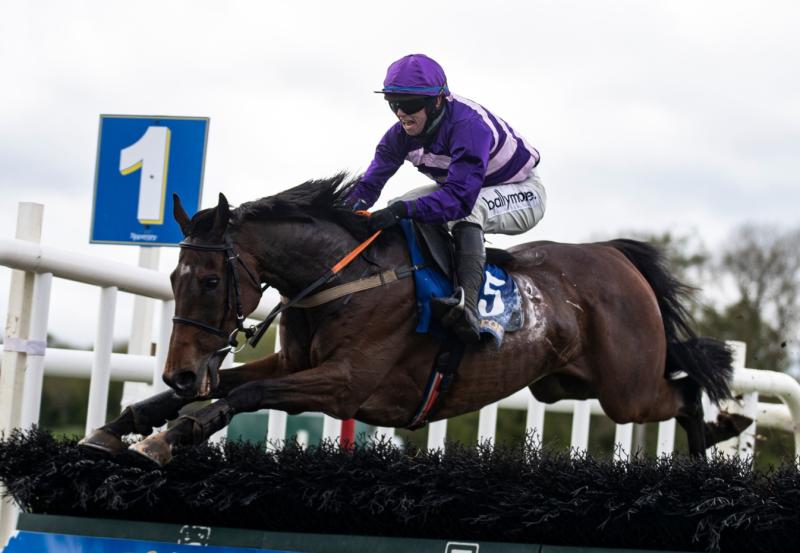 The Andrew McNamara-trained Lessofdnegativity and Darragh O'Keeffe on their way to success at Tipperary Racecourse on Thursday last Picture: Patrick McCann/Racing Post

BIRTHDAY boy Mark Enright, from Castlemahon, celebrated with a winner at Cork on Wednesday last  where he partnered the Fozzy Stack-trained Can’thelpfallin to win the opening seven-furlong maiden.

The 10/1 chance, owned by Paul Shanahan, came from off the pace to score by three-parts of a length from the Jessica Harrington-trained Golden Lyric for Enright who turned 29 on the day.

Rathkeale jockey Conor McNamara bagged his second winner of the season when teaming up with County Waterford trainer Michael Griffin to land the opening division of the mares’ maiden hurdle with Present Road at Tipperary on Thursday.

Owned and bred by Seamus Neville, the 40/1 shot was never far off the pace and battled well to edge out the Declan Queally-trained 2/1 favourite Robindeglory by a nose.

Griffin said: “Seamus owns her, does all the work with her and virtually sleeps with the mare! All credit is due to him and Conor who gave her a super ride. She’ll go out for a month now and will be a lovely mare next year to go steeplechasing with.

"She is a lovely jumper of fences and we’ll try to get black-type with her.”

Darragh O'Keeffe was aboard the 28/1 chance as he got the better of the John Joe Walsh-trained Wild Atlantic Lady by a length and three-parts.

Ballingarry jockey Billy Lee took the riding honours at the Curragh on Saturday where he rode three winners for three different trainers. The highlight of a fine day’s work was his clear-cut success on the Willie McCreery-trained Epona Plays which recorded a four-length win in the Group 2 Lanwades Stud Stakes.

Owned and bred by Renzo Forni, the 9/2 chance was a couple of lengths clear early inside the final furlong and there was no catching her.

Not surprisingly, connections will now aim their brilliant winner at a Group 1 race. Lee’s first success came on the Paddy Twomey-trained 2/1 shot Pinar Del Rio which landed the six-furlong two-year-old maiden in convincing fashion while even more emphatic was the Michael Grassick-trained Verhoyen which took the handicap over the same distance by two and three-parts of a length from the Sarah Dawson-trained Pretty Boy Floyd.

Shanagolden jockey Chris Hayes also had an afternoon to remember as he won the Group 3 Gain Marble Hill Stakes on the Fozzy Stack-trained 5/2 chance Castle Star.

She heads for the Coventry Stakes at Royal Ascot next month following her two-length success over the Donnacha O'Brien-trained 15/8 favourite Masseto.