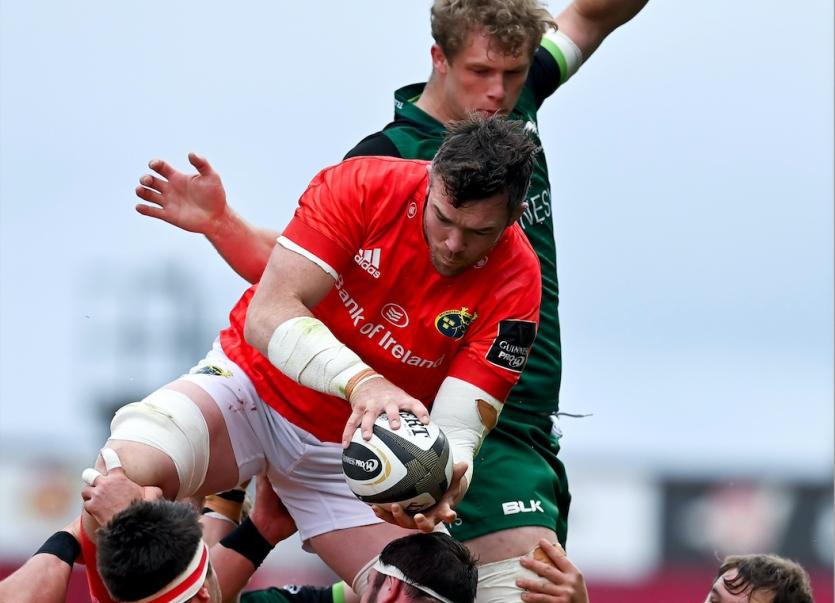 Munster failed to make it three wins from three in this season's Rainbow Cup following a shock 24-20 loss to Connacht at Thomond Park this evening. Munster entered the game as 17 point favourites, with eighteen Irish internationals in their 23.

The first half saw four tries, two for each side as Connacht took the lead into the short whistle, 17-14.

Limerick's Conor Fitzgerald, now of Connacht, opened the scoring with a fourth minute penalty, before Munster responded with a hard fought James Cronin try. The Highfield man, crossed the white wash from a metre out and fought well to place the ball despite the efforts of former Garryowen backrow Conor Oliver. Ben Healy added the extras to leave Munster 7-3 in front after seven minutes.

Former Munster men were to the fore all night for Connacht as Sam Arnold scored straight from the resultant kick off following an error in judgement from Munster's forwards. Arnold, starting on the wing, barrelled over Craig Casey to score. Fitzgerald slotted an excellent sideline convert to put his side 10-7 in front.

Connacht were to go further in front on the 26th minute as Conor Fitzgerald danced under the Munster posts to score, as the home side were down to 14 men following the sin binning of Shane Daly for a deliberate knock on. As the half closed Connacht, with the wind at their backs were full value for their 17-7 lead.

The tide looked to be turning back in Munster's way just before half time however as Rhys Marshall scored a try from the back of a rolling Munster maul. When Ben Healy added the extras, the men in red entered the sheds, just three down.

The second half had everything. Goal line drop outs, disallowed tries, late hits, some scraps, TMO decisions and Captain's challenges.

Connacht started the half the better. One minute in, a kick through bounced over the head of the on rushing Conor Oliver, but luckily for Connacht the ball landed in the hands of Kieran Marmion. The Irish international made no mistake rushing in to score. Following the score however, he threw the ball at Ben Healy, resulting in a restart at the half way line for Munster, with a penalty.

The score after 41 minutes was Connacht 24 Munster 14. What was to come was a second half full of errors from Munster and heroic defence from Connacht. Peter O'Mahony had a try ruled out for a knock on in the build up after 45 minutes. Munster would have to wait until the 51st to break their second half drought. Ben Healy kicked a penalty from inside his own half to make the score 24-17. When Joey Carbery came on he was tasked with knocking over a penalty from in front of the posts and he duly obliged. 24-20 after 65 minutes and it looked like there would be only one winner. Munster had all the momentum.

All Munster needed now was a try. They just could not get one though.

Andrew Conway crossed the white wash for what would have been one of the best tries he ever scored for Munster, however it was called back for a knock on, again, earlier in the move. The move itself started with a Peter O'Mahony side stepping Sam Arnold and continued on a 30 metre run, before a cross field kick from Carbery saw the ball land perfectly for Conway, who had Wootton to beat to score.

But Munster just could not crack the green defensive line. The game ended with a Munster knock on, which was 'challenged' by captain Peter O'Mahony. However TMO Joy Neville decided that there was a knock on and Connacht survived.

Munster must now lick their wounds and plan for their next challenge, a home tie with Cardiff Blues on May 28, with another tie against Zebre on June 11. The loss this evening comes on the back of an announcement from the PRO14 that a final will take place in the competition this season.

On Friday the Guinness PRO14 Rainbow Cup is set to culminate in an historic ‘North v South’ Final on June 19 so that the dual tournaments operating in Europe and South Africa will tie together to produce one winner.

Planning is now at an advanced stage and all written approvals are expected imminently for the game to take place at a European venue.

Munster currently occupy top spot after three rounds with games to come against Connacht this evening, Cardiff Blues and Zebre.

Further details on the ‘North v South’ Guinness Rainbow Cup Final will be provided next week.