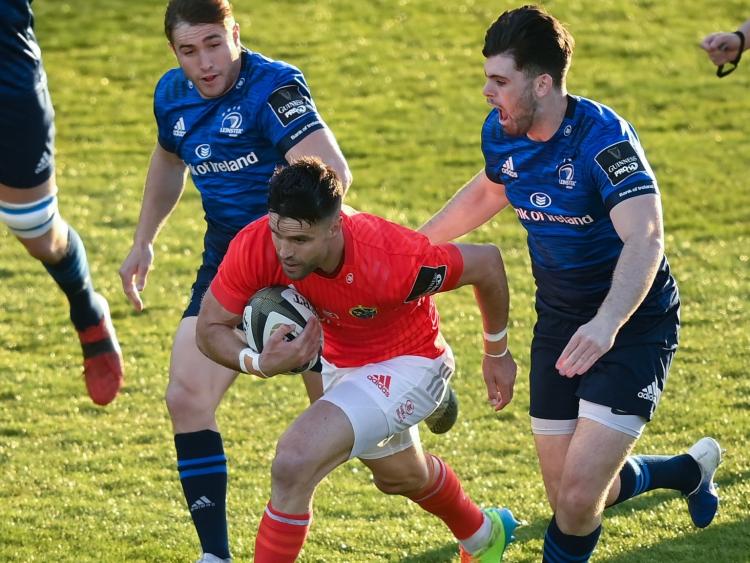 Munster scrum-half Conor Murray on his way to scoring his side's first try despite the tackle of Jordan Larmour, left, and Harry Byrne, of Leinster, in their Rainbow Cup fixture at the RDS on Saturday

RESILIENT Munster ended their six-game losing run against Leinster in emphatic fashion when securing a deserved 27-3 victory over Leinster in their inaugural Guinness Rainbow Cup fixture at the RDS on Saturday evening.

Two tries, one in either half from Conor Murray, helped Johann van Graan's charges record just their second win since 2008 against Leinster in Dublin.

A penalty try on 72 minutes, after Leinster illegally halted a powerful Munster maul close to their tryline, sealed a convincing victory for the visitors who brought huge physicality and resolute defence to the contest in Dublin 4.

South African centre Damian de Allende turned in another high class display in the Munster midfield as the province exacted a small degree of revenge for their comprehensive Guinness PRO14 final defeat to the same opposition at the same venue a few short weeks ago.

This was the fifth meeting between the two Irish interprovincial rivals since rugby resumed last August after the first Covid-19 lockdown.

Munster's need was greater here as Leinster will surely have had one eye on their mammoth Heineken Champions Cup semi-final clash with Ronan O'Gara's La Rochelle side next weekend.

And after suffering so much heartbreak at the hands of their arch rivals in recent seasons, Munster turned in a high octane, high intensity display here, playing with great intent throughout and the visitors recorded their first win over their interprovincial rivals since December 2108.

The winners' bossed the breakdown area too as Munster improved on a record which had seen them lose 10 of their 11 previous meetings with Leo Cullen's side.

Prior to kick-off, Munster's record in their sixteen previous clashes away at fellow Irish provinces was won four, lost twelve with all four victories coming against Connacht.

Munster got off to the perfect start when striking for the game's opening try and what a smashing score it was.

South African World Cup winner Damian de Allende was the creater-in-chief after some excellent work at the breakdown from Peter O'Mahony. The centre rampaged forward with a terrific break up the middle of the pitch when the 47-time capped Springbok also showed terrific footwork.

De Allende had scrum-half Conor Murray running an excellent line on his shoulder and the Patrickswell man collected possession and dotted down.

Conor Murray scores his second try, after Chris Farrell gets on the end of a brilliant Gavin Coombes offload in the build-up.

Carbery duly adding the conversion for 7-0. Leinster were dealt another blow soon after when play-maker Harry Byrne was forced off with an injury.

The four-in-a-row PRO14 champions did open their account when replacement out-half David Hawksworth slotted a penalty.

Munster lost Stephen Archer to a yellow card, but managed to increase their advantage by half-time to 10-3 after Carbery slotted a penalty.

The visitors pulled further clear when Carbery added a 53rd minute penalty goal to out 10 points between the sides at 13-3.

Munster pulled clear with a second try from Murray, following a delightful off-load from Gavin Coombes, while the visitors were also awarded a 72nd minute penalty try.