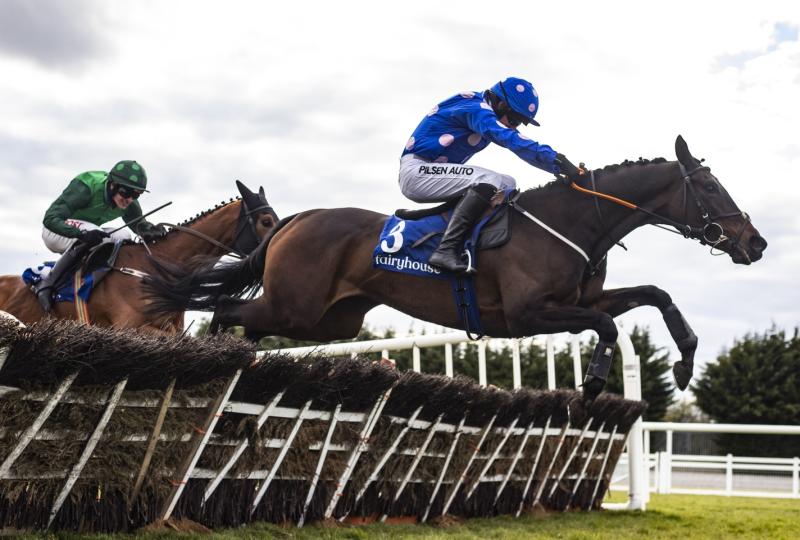 RATHKEALE jockey Conor McNamara brought his tally for the season to 26 with winners for trainers Gavin Cromwell and Willie Mullins last week.

McNamara partnered the Darren Cahill-owned Coulonces to win the mares’ maiden hurdle at Fairyhouse on Tuesday.

The Gavin Cromwell-trained 10/1 chance was never far off the pace and led before the final hurdle to beat the Willie Mullins-trained 10/11 favourite Manitopark Aa by a comfortable two and a quarter lengths.

He then teamed up with the champion trainer at Tramore on Sunday where he won the opportunity handicap hurdle on even-money favourite En Beton. The seven-year-old raced to a six-length win from James Dullea’s 2/1 chance Rocky’s Howya.

Also among the winners at Tramore on Sunday was Knocklong trainer John Gleeson who won the two-mile handicap chase with the Darragh O'Keeffe-ridden Jack Holiday.

Owned by Flor McCarthy, the 8/1 shot made all the running to beat Eugene O'Sullivan’s Carnet de Stage by four and three-parts of a length.

The 9/2 shot stayed on well from the final flight to beat the Flan Costello-trained Aboutagout by five-and-a-half lengths.

Bolger said: “Paul is a good friend of mine and he’s at home watch in. He’s after shouting the television down! War God had a nice run at Naas in a winter maiden hurdle and when I saw this race with no bumper winners in it, it was the step to go.

"We fancied him but the lads said after the first race that the ground was well watered for a good ground horse but he got the job done and got a lovely ride from Darragh. We’ll try to find something for him in Killarney now.”

Cratloe conditional rider Mark McDonagh teamed up with County Kilkenny trainer Eoin Griffin to win the rated novice hurdle with Jody Ted which carries the colours of the winning jockey’s father and namesake.

The 11/1 chance came from well off the pace to win from the Shane Crawley-trained Cotteemcavenniegoal and now heads to the Punchestown festival later next week. Mark’s grandfather Michael McDonagh was next into the winners’ enclosure as the five-year-old Cratloe took the two-mile handicap hurdle under Barry Browne.

The 11/2 shot was another to come from the rear of the field and he beat the Karl Thornton-trained Rich Belief by a length and a half.

Shanagolden jockey Chris Hayes rode the first of his weekend winners at the Curragh on Saturday where he partnered the Fozzy Stack-trained newcomer Cheerupsleepyjean to an impressive success in the five-furlong conditions’ race.

A strong 5/2 chance, she ran freely through the early stages of the race but came home to good effect and had loads in hand over the Denis Hogan-trained Charlie De Rio.

Hayes recorded a double at Dundalk the following afternoon where he was seen to great effect on both Maggie Thunder and Alhaazm.

He partnered the Paddy Hassett-trained Maggie Thunder to a half-length success over the David Marnane-trained Poet’s Pride in the five-furlong handicap at odds of 3/1 and followed up on Kevin Prendergast’s Alhaazm in the seven-furlong handicap, the 2/1 favourite getting up in the dying strides to score by a head from the John McConnell-trained Fastman.

Connections have called time on the racing career of Dundalk legend Togoville, the winning-most horse on the all-weather in Ireland with 14 victories to his name.

He won for the final time at Dundalk in February and is being retired at 11 years of age by owner Patrick McCann and Shabra Stables-based trainer Anthony McCann.

The latter said, “We gave him a run in an 85-rated race a couple of weeks ago and he found it hard to go with them. The spark seems to be there, but he doesn’t have the legs for it anymore.

After discussing it with Patrick we decided that now is the time to allow him to enjoy the retirement he thoroughly deserves.”

Togoville gave Pat Smullen his final winner in February 2018. Togoville was also a winner at Laytown and Roscommon.