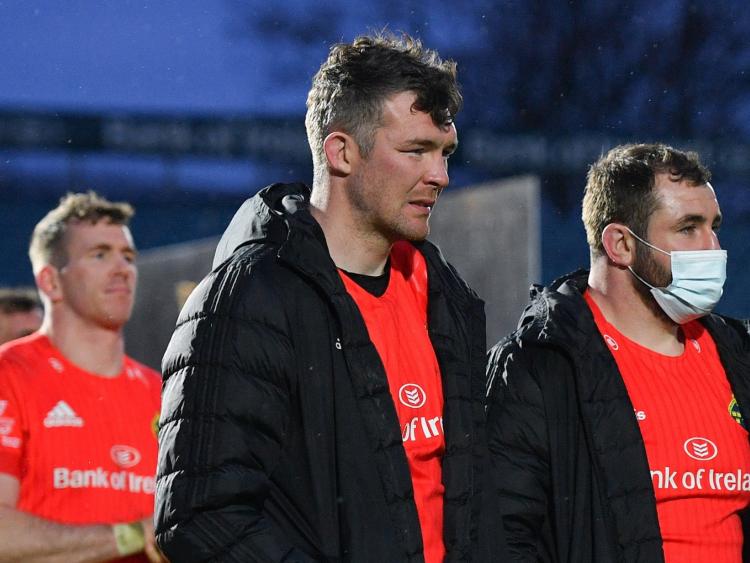 MUNSTER captain Peter O'Mahony believed Leinster's ability to starve them of possession had been a key factor in Leo Cullen's charges securing a fourth successive Guinness PRO14 title on Saturday.

A dominant Leinster side made it a record six wins on the bounce against Munster when emerging 16-6 victors in blustery conditions in the first final meeting between the provinces since 2011.

O'Mahony was replaced in the third quarter of Saturday's game with a cut to his leg. Munster face French champions Toulouse in a Heineken Champions Cup last 16 clash at Thomond Park next Saturday, 3pm.

Following Saturday's defeat to Leinster, O'Mahony said: "It was very difficult. Physically, it was very attritional. We struggled to get the ball. We had in the mid-30s percentage wise in terms of possession in the first half. We didn't have a huge amount more in the second half.

"We needed to be able to impose ourselves on the game and we struggled to do that with such little ball and I thought Leinster put us under a huge amount of pressure with the way they play.

"Defensively, we struggled to contain them and I thought, fair play to them, they played very well today and were the better team.

"Look, we struggled to get our hands on the ball and the way we have been playing we like to get stuck in and when we get into teams' '22 we are good, we are very good. We just didn't get the access today and that is probably credit to Leinster."

"When we get into a team's 22, we are good, but we didn't get the access today, and that's probably credit to Leinster."

Munster captain Peter O'Mahony admits his side struggled to impose themselves on today's #GuinnessPRO14 final.#LEIvMUN pic.twitter.com/K2F7RNpqJ8

O'Mahony said that while the squad was hurting in the wake of their final defeat to Leinster, the thoughts would quickly turn to the glamour European date with Toulouse in Limerick next weekend.

O'Mahony told eirsport: "We will have a long probably two days. It is going to hurt. We have Europe next week, we will take our two days, and we will get back in Monday-Tuesday and we have to get on with it, get on with the big week ahead, keep the head up and battle on."