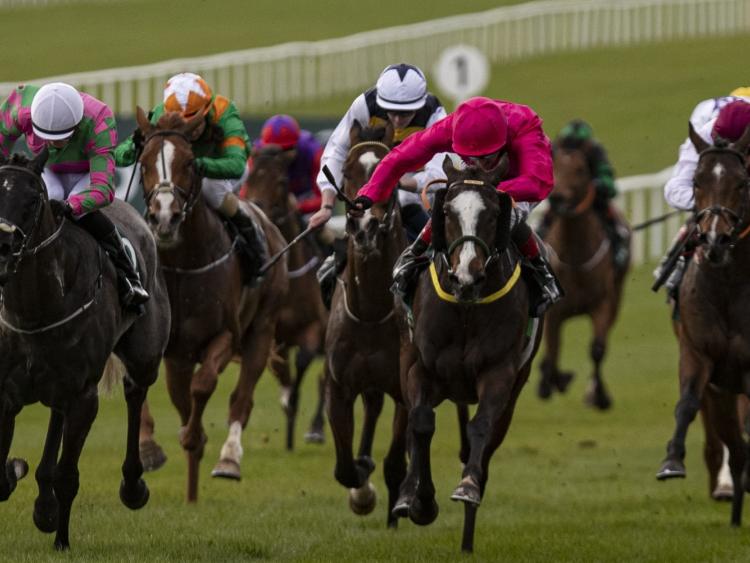 Shanagolden jockey Chris Hayes and Layfayette (pink) win the Paddy Power Irish Lincolnshire on the opening day of the 2021 Flat season at the Curragh on Sunday Picture: Patrick McCann/Racing Post

The David Marnane-trained six-year-old was ridden prominently by Lee and powered through the final furlong to win by a cosy one and three-quarter lengths from It’s All A Joke.

Castlemahon jockey Mark Enright is enjoying the Flat game and he bagged the mile-and-a-quarter Irishinjuredjockeys.com Handicap with Tooreen Angel (15/8f).

Fozzy Stack’s four-year-old filly was in rear early on before Enright navigated a clear path up the straight and Tooreen Angel stayed on well to just get up on the line, denying Bring Us Paradise by a head.

Shanagolden horseman Chris Hayes was also on the mark with Alhaazm (10/3) in the Floodlit Friday Nights At Dundalk Handicap. The Kevin-Prendergast-trained five-year-old tracked the leaders before picking it up at the furlong marker posting a length-and-three-quarter success from Leadership Race.

Hayes followed up his phenomenal all-weather success through the winter, where he was leading rider, by landing the feature prize on the opening day of the Flat season at the Curragh on Sunday, the Paddy Power Irish Lincolnshire with the Noel Meade-trained Layfayette (8/1).

Hayes had the four-year-old gelding in a good position from the gates, hitting the front inside the furlong marker and responding to the call for maximum effort to hold off the Ger Lyons-trained Maker Of Kings by half a length.

There was success too for the brother-and-sister pairing of jockey Billy Lee and trainer Gillian Scott with Starting Monday (12/1) in the WhatOddsPaddy? Handicap.

Lee had to walk a recalcitrant Starting Monday down to the start but the four-year-old was more than willing out of the stalls, showing good early speed and then asserting over the final quarter-mile to score by a comfortable two and a quarter lengths from Fugacious.

Rachael Blackmore - the queen of Cheltenham

Cheltenham 2021 came with a pre-warning that it would be much different to the norm and that wasn’t misplaced - a record 23 Irish-trained victories over the four days underlined an incredible festival for Irish-trained, ridden and Irish-bred horses. Read full story here: https://bit.ly/3lAaHJ6