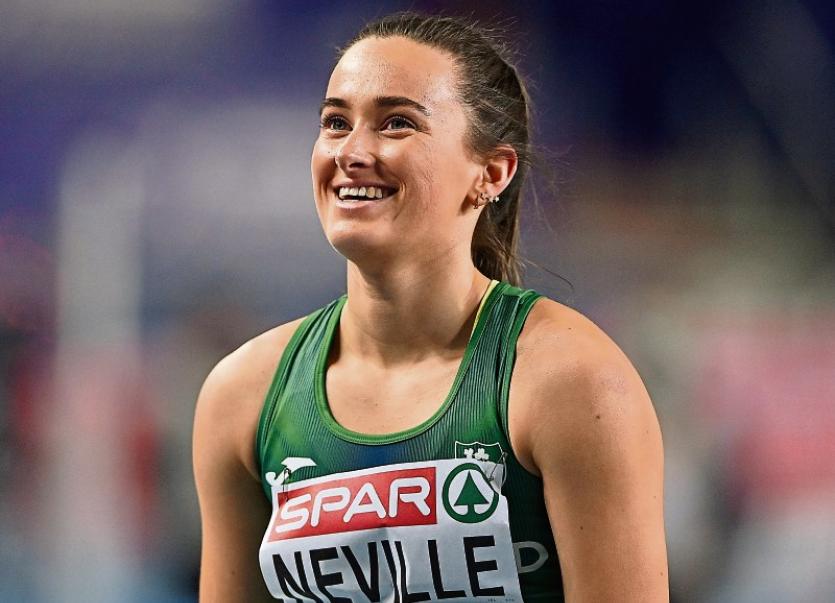 CONGRATULATIONS to the Emerald duo of Ciara Neville and Sarah Lavin who represented Ireland with distinction at the European Indoor Championships in Torun, Poland last weekend.

Sarah Lavin came third in her 60 metres hurdles heat, lowering her pb from 8.13 to 8.06. in the process and third place qualified her automatically for the semi finals. There she was just one second slower (8:07) and her fourth place narrowly failed to yield a final place.

A time of 7.34 for Ciara Neville qualified her automatically in fourth place for the semi finals of the 60 metres. She followed that up with 7.37 a short time later in her semi final where she finished 7th. Well done to both athletes and Athletics Limerick wishes them the best for the season ahead.

THE month of February was filled with our members and friends running our annual fundraiser, the Adare 10K.

This time we ran together but stayed apart, within the 5km radius participants took to the roads, greenways, parks, and tracks to set out on their chosen distance.

Participants were spoilt for choice this year as they could choose from the traditional 10km which is the distance raced every year along with 1km, 2km and 5km. Although we cannot wait for the day when we all race together again there was a silver lining to the race being held virtually as this allowed our younger members to run and complete the shorter distances which we have not had in previous years.

We would like to thank everyone for participating and we cannot wait to welcome you all back in 2022. Well done to everyone for completing the races.

We would also like to say a big well done to all our juveniles, Joseph Carr, Amy Lenihan, Katie Lenihan, Ailey Lyons, Kealan Lyons, Eavan Lyons and Garvan Lyons for running.

The traditional 10km distance was the most popular race choice with 165 runners, The top three men were Matthew McMeekin 32:25, Declan Guina 33:08 and Niall O'Callaghan 33:32 the top three women were Sorcha Macdomhaill 34:46, Breda Gaffney 38:14 and Mary Cronin 38:55. Full results can be viewed on www.myrunresults.com

Congratulations to everyone and thank you very much to everyone who sponsored, registered, donated, walked and ran in support of West Limerick Athletics Club. We hope that the future sees us returning to normal and we will be about to hold a traditional road race on the last Sunday in February 2022.

IN order to keep motivation up for training and try to have some competitive fun we are inviting other clubs to a friendly challenge for the month of March.

All runs are virtual and in line with government restrictions. Please run on a flat a course as possible to ensure fairness for all, no big downhills! To encourage members to take part we will score the final results as teams, so first 6 men and first 6 women who finish highest in the results will score for their team/club.

Participating clubs are to nominate one club member to coordinate their own club results and send to kevinodonoghue@gmail.com

The deadline is 6pm on Sundays. There will be a weekly leaderboard and a final end of month leaderboard.

Juveniles: Run 1k any time in March and we will have weekly and end of month results.

Adults: 4 mile race any time in March with final results at the end of the month.

*Multiple times can be submitted by an individual but only the fastest will count in the final list. Best of luck to all, we cannot wait to meet up and run together when the time is right. – West Limerick AC

With defending champion Seán O’Sullivan not taking part, there was an opening for challengers. It was taken by Granagh’s John Cregan who won in 29:35 at Ballysheeley.

His win was with ‘comparative ease’ from Noel Enright of Limerick AC with Malachy Maxwell (Castlemahon) third. Limerick AC though with 3 finishers in the top 6 did take the team title on 43 pts from Granagh on 56. Feoghnagh-Castlemahon were third on 102. Granagh were at this point in middle of 6 Cross Country team Championships in a row.

In the Novice event the winner was Jerry Mc Keown Hillcrest AC who won the 1500m at the Catholic student games in Belgium the previous summer.

He ‘got the verdict by 10 yards from Peter Fitzgerald of Granagh’ with Tony Barry (Hillcrest) third.

Kilkeeley took the team award on 27 pts with Hillcrest runners up on 33. In the U13 event T. Laffan (Limerick AC) got the verdict in a close finish from Pat Fitzgibbon of Granagh.

There was no ladies competition but the Limerick NACA had a few weeks previous passed a motion to include women’s event at all Championship programmes from the following year. They would sought also arrange an inter-county track contest against Clare.