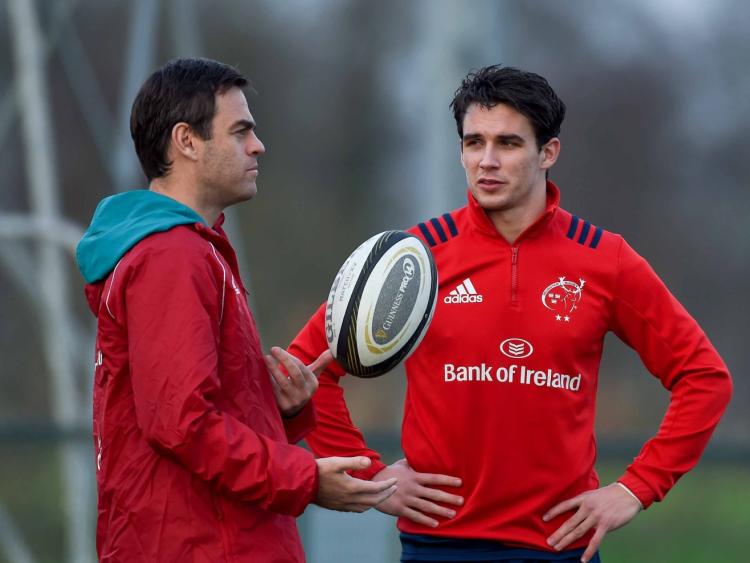 MUNSTER head coach Johann van Gran said the province will take it week by week when it comes to reintegrating the fit-again Joey Carbery back into competitive action with the side.

Out-half Carbery made his long-awaited comeback from an ankle injury when coming off the replacements' bench in their Guinness PRO14 victory over Cardiff Blues at Cardiff Arms Park on Friday night.

It was Carbery's first time to feature for Munster since January 2020.

“Just to put it into context, he has only done squad training up until Friday night which is an actual game scenario where he can get hit blindly, that he's actually got to go out and do something where it's not training.

"He recovered pretty well in that game. We said all along that we will take it week by week with Joey. It's firstly how he feels, then taking the guidance from the medical and athletic performance teams. There's also the bigger picture, it's going to be no good to anybody if we just throw him in straight away in terms of minutes.

"He'll take his time over the coming weeks."

Van Graan also stressed the strength in depth Munster have in the out-half position at present.

Van Graan added: "The other thing I would like to say is that JJ (Hanrahan) has been playing really good rugby, Ben Healy has had some fantastic moments, and then you've got two other guys pushing behind in Jack Crowley and Jake Flannery that will get minutes in the coming months as well. Within that context, I'll do what's best for Joey, the team, and all 10s involved."

Van Graan also reported that their South African second-row RG Snyman has a 'long way to go' before returning to competitive action.

Snyman, who suffered a serious knee injury a short few minutes into his debut against Leinster last  August,  is continuing his rehabilitation from a long-term knee injury and has this week progressed onto the next phase of his rehab, which includes running.

Johann van Graan said: "In terms of RG (Snyman), he's had a very difficult time with him and his wife, Saskia, arriving in the middle of lockdown straight from Japan, going into their new home which they'd never seen, sitting for two weeks on their own in a new country, then only meeting seven or eight guys to train in his group way back in June or July.

"A few weeks later he met more of his team-mates, then getting up to speed in a pretty short space of time in terms of what Munster's about on the pitch, then playing for seven minutes and getting injured. That disappointment, he came here with a very specific job in mind - he came here to make this team and this club better.

“So that's good news from our side, it means from a medical perspective, we can take the next step in his journey.

"It will still be an unspecified time. I said previously that it would be somewhere between March and June that he will be back."