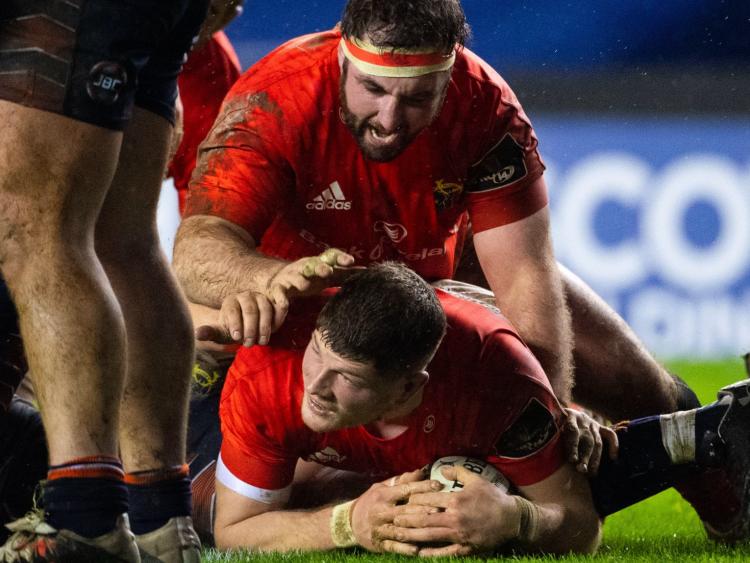 RESILIENT Munster have taken another big step towards securing a first Guinness PRO14 final appearance since 2017 after securing a hard fought 22-10 victory over Edinburgh at a wet and windy Murrayfield on Saturday night.

Powered by a hugely impressive display from their pack, Conference B table toppers Munster outscored their hosts by three tries to one to record a fully deserved success, their fourth in five meetings with their hosts at the home of Scottish rugby.

The win leaves table toppers Munster 9 points clear of second-placed Connacht in their Conference. The two Irish provinces will face-off in Limerick next month in a crucial fixture.

An abrasive Munster side laid the foundation for Saturday night's success in the opening half after which they enjoyed a sizeable 17-3 advantage.

Aggressive at the breakdown and on top at set-piece time, Munster added a third try in the second half from the prolific Gavin Coombes to go with earlier five-pointers from flanker Jack O'Donoghue and scrum-half Craig Casey, who celebrated the signing of a new contract this week, by sniping over shortly before half-time.

Five of the players who signed contract extensions with Munster this week were part of the 23-man squad.

Andrew Conway returned for his first appearance since December on the wing and was one of four players back from Ireland camp in the starting back-line, along with Casey, winger Shane Daly and centre Chris Farrell.

Rory Scannell made his 100th Guinness PRO14 appearance off the bench for Munster in the second half.

Jack O'Donoghue breaks through some resolute Edinburgh defending to score the first try of the evening.

After Edinburgh dashed into a 3-0 lead early on through a penalty goal from out-half Jaco van der Walt, Munster drew level when JJ Hanahan kicked a 15th minute penalty goal after the home side was pinged at the breakdown.

On a cold, wet and windy night at Murrayfield, every point was going to be crucial. Munster struck for the game's opening try on the half hour mark.

From a powerful Munster scrum inside the Scottish side's '22, Munster opted to use the pick-and-go to make ground. A series of physical carries eventually produced the opening for flanker Jack O'Donoghue to dot down from close range.

The 8-3 advantage soon became 10-3 when Hanrahan duly added the conversion.

Munster's led was out to 14 points by half-time as the opportunist Casey sniped over the tryline from close range. The try was awarded after match referee Adamson consulted with the TMO to check the grounding.

Craig Casey worms his ways under the posts for Munster's second try.

Hanrahan duly added the extras to complete the first half scoring.

Edinburgh needed a quick start to the second half to stay on Munster's coat-tails and they managed it when their powerful number eight Viliame Mata barged his way over the whitewash.

Van der Walt's successful conversion made it a one score game suddenly at 17-10 with 46 minutes on the clock.

To their credit, Munster responded to conceding that score in emphatic fashion. The dominant Munster scrum won another penalty close to half way and the visitors opted for a kick to touch off the award.

Munster's driving maul was then powerful and cohesive as number eight Gavin Coombes powered his way off the tryline for his seventh try of the season. Hanrahan was unfortunate to see his conversion collide with the upright before rebounding onto the ground as the visitors lead remained at 12 points, 22-10.

The visitors ultimately ran out of time in their bid to secure a try bonus point.