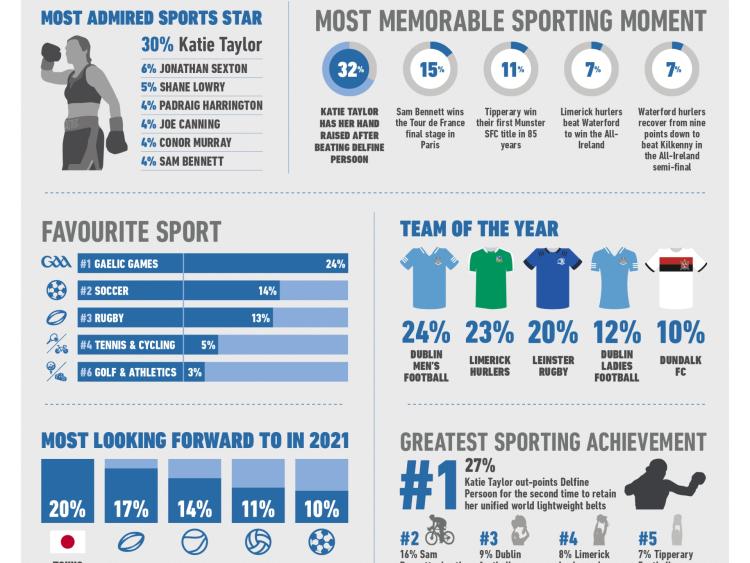 The achievements of Dublin in winning six in-a-row, the popularity of Gaelic Games and Katie Taylor’s enduring appeal are all reflected in the findings of the Teneo Sport and Sponsorship Index (TSSI) 2020, which were released today.

The TSSI is a comprehensive 1,000 person nationally representative survey with quotas imposed across gender, region, age and social class.  The research was carried out by Teneo’s Sports and Sponsorship team and iReach and examines the Irish general public’s attitudes towards sport and their sporting heroes.  This is the view of the general public and not a survey of sports fans.  It is the eleventh year of the TSSI and the research was carried out between January 14th and January 19h.

Team of the Year
This was a closely fought contest between two of the finest teams of the modern era in Gaelic Games, with Dublin’s six in-a-row winning footballers just edging out Limerick’s All-Ireland winning hurlers.

The Dubs, who created history when they beat Mayo in the final just before Christmas, got 24% of the vote – only one percent ahead of Limerick on 23%. The Dubs shared the Team of the Year title in 2019 with the Ireland women’s hockey team, who had sealed their placed at the Tokyo Olympic Games.

In 2020, Leinster Rugby weren’t far off the top two and finished in third place on 20% of the vote thanks to their unbeaten Pro14 season. Dublin’s ladies footballers came fourth with 12% after they made it an All-Ireland four in-a-row last month while Dundalk FC fill out the top five with 10% of the vote having made this season’s Europa League group stage.

Favourite Sport
When it comes to the nation’s favourite sport, the big three of Gaelic Games, rugby and soccer continue to dominate. Gaelic Games grew in popularity in 2020 and holds on to its status as Ireland’s Favourite Sport for the third year on the bounce, having moved to the top of the charts for the first time in 2018. Soccer had been the nation’s number one for eight years in succession from 2010, when the TSSI research was first carried out.

Gaelic Games (football, ladies, hurling and camogie) won 24% support, ahead of soccer (men and women’s) on 14% and, after a decade of great on-field success, rugby (men’s and women’s) remains popular on 13%.

Tennis and cycling both enjoy healthy followings in Ireland and were voted joint-third on 5%, just ahead of athletics and golf on 3%.

Most Admired Sports Star
Katie Taylor makes it a four in-a-row of wins in Ireland’s most Admired Sport Star category, holding on to the title she took in 2017, 2018 and 2019. In fact, it’s the sixth time in eight years that she has topped this particular poll, the only other winners in that time are the now-retired former Ireland rugby captain Paul O’Connell in 2015 and MMA fighter Conor McGregor in 2016.

Taylor is a clear winner with a 30% the votes, well ahead of second placed Ireland rugby captain Jonathan Sexton, who brought in 6% of the votes. Shane Lowry, who finished second in this category in 2019, placed third on 5%, with Joe Canning, Padraig Harrington, Conor Murray and Sam Bennett all sharing fourth spot with 4%.

Most Memorable Sporting Moment
Katie Taylor fought a second war with title challenger Delfine Persoon last August and following another bout that went the distance, the Irish public voted the moment her hand was raised in victory as the most memorable sporting moment of 2020.

This moment picked up 32% of the public vote, well ahead of her nearest rival, cyclist Sam Bennett, who provided one of the highlights of the 2020 Irish sporting calendar with his dramatic sprint victory on the final stage of the Tour de France in Paris. This got 15% of the vote.

Tipperary’s historic Munster Senior Football Championship win, when they beat Cork in the final to claim their first provincial crown in 85 years, was also acknowledged in this category, picking up 11% of the vote and third place.

Looking ahead to 2021
Following a disrupted year in 2020, the Irish sporting public is hoping for a packed sporting calendar in 2021, with the delayed Tokyo Olympic Games the event the nation is most looking forward to, with 20% of the votes. Second in the running is the forthcoming and ever popular Six Nations, which gets underway next month and polled at 17%.

Rounding out the top five is Euro 2020, another major competition carried over from last year, on 10%, a significant drop from the 17% is got in the same category last year and this can be put down to the fact that since the 2019 poll was taken Ireland failed to qualify for the continental competition.

Rob Pearson Director, Teneo Ireland: “Looking back on what was a unique sporting year in 2020, the findings of the Teneo Sport and Sponsorship Index confirms the special place that sport holds in Irish hearts and the vital role it plays in our society.

“For the first time in seven years, a GAA side takes sole possession of top spot in the Team of the year category. GAA sides typically struggle in national bodies of research given the local nature of the games and appeal of teams, but the incredible achievement of Dublin’s footballers is recognised after their historic All-Ireland six in-a-row.

“Katie Taylor remains undoubtedly our favourite sport star and she is Ireland’s most admired for the fourth year in succession. Her ongoing excellence in the ring continues to capture the imagination of the general public and along with Dublin’s Ladies Footballers strong showing in the Team of the Year category, it proves once again the appetite for women’s sport amongst Irish people.

“Looking forward to 2021, we’re excited by events at home and abroad, both local and international. There’s the delayed Tokyo Olympic Games, which tops the poll, Euro 2020 and the Six Nations as well as the ever-popular All-Ireland championships. There is no doubt that the there will be more disruption to sport in 2021 but we are hopeful that this will be remembered as a comeback year for sport.”