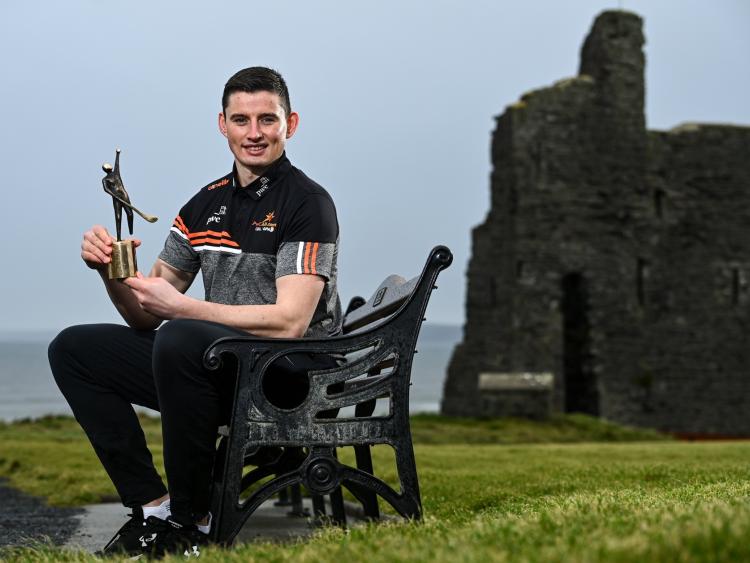 LIMERICK hurling star Gearoid Hegarty collected his second PwC GAA/GPA Hurler of the Month award in as many months this Wednesday.

And, no one would doubt that more individuals awards will come the way of Hegarty in the coming weeks after a swashbuckling 2020 season for the St Patricks man.

So what's the secret to his 2020 season that looks set to propel him to the Hurler of the Year accolade.

"This year I actually stopped doing extra work. Maybe in the past I was doing too much and burning myself out and wasn’t super fresh coming into games," Hegarty explained to the Limerick Leader at an online media event to make his PwC GAA/GPA Hurler of the Month award.

"I stood back a small bit this year and stopped doing a ridiculous amount of work and just do what was set out for you and then you are fresh going into a game."

He explained: "Even in the gym I would always do an extra set - if we were given three sets I would do four. It souls great but Mikey Kiely is a super strength and conditioning coach and if he thinks three sets is enough when why was I doing a fourth one when I don’t know anything about it".

"I have done over the last couple of years an incredible amount of work to get to where I am today because any person on an inter-county panel around the country are going to need an incredible amount of work to get there in the first place. When you actually get there, they (management) know what they are doing so if you give everything in training for Paul (Kinnerk) on a Tuesday and Friday night and stick o Mikey’s (Kiely) plan in the gym on a Monday and then go out on a Sunday and take into account maybe what Caroline (Currid) was talking to you about during the week and a couple of tips the other lads might give you, well that is enough."

In his fifth year on the senior hurling panel, Hegarty also revealed that he has learnt the importance of asking questions.

"I think this year I went out of my way to ask more questions. Thinking about it I always tell my students in Desmond College in Newcastle West that they need to see the other students in the classroom as a resource and if they are stuck to ask the person beside you. I was internally reflecting and said am I asking enough questions of the people that is in our group and we are fortunate to have some absolutely fantastic people in there in their own departments."

He explained: "I would be quite a reflective person and after a match I would watch it back and watch back my own clips to see what i did well and what I need to work on. This year I would have asked for a lot more help than before in terms of going to Caroline (Currid) our sports physiologist, going to Paul Kinnerk in the lead up to a game and asking him a couple of questions in terms of how the opposition are going to set up and how they defend and maybe go to Mikey (Kiely) on a Monday maybe in the gym on Monday. I probably wasn’t asking them the questions that i should have been asking".

The towering wing forward told how holding back on training didn't come easy.

"We were actually given a break at one stage - I think it was seven weeks off and I can’t remember what time it was because time didn’t exist over the lockdown! We were given the break and we were after doing a really hard block of training with gym work and running and after two or three days it was on my mind and the little voice in my head was saying why are you taking a break when other fellas will be doing a bit. I just said I have to ring Caroline and ask her and she was like ‘you were given a break, so will you take it and don’t be stupid’. Even though I knew she was going to say that, I still had to ring her and hear those words and then settle down. She was like ‘you need to take a break because when we do go back you need to be mentally and physically fresh and hungry for training'."

He added: "That was one of the most important phone calls I made all Summer to ring her. I was really hungry for training when we came back after those couple of weeks. She is a special person and I am delighted she is working with us".

No thinking of the 2021 season just yet for the free scoring attacker.

"I actually genuinely haven’t thought about the year ahead at all. I am very cognizant of the fact that it is such a quick turn around from December 13. I really made it my business to take a break from everything - we haven’t met up at all after the few days we had. There hasn’t been any contact from the group - we are not going back training for another couple of weeks because they gave us a break because we only finished a couple of weeks ago," he outlined.

He added: "It will be my main priority in a couple of weeks when it comes around but at the moment I am completely taking a break".

"I can’t wait to get back training because we are back in a lockdown and restricted in your movements and can’t go anywhere or meet people from other households so I am looking forward to going back but I am really forcing myself to take a break from it all because I know it will be needed because it is going to be a short season and there is no point needing a break in March or April and being sick of training because that is when you need to be really in the zone and hungry."

Looking back on 2020, Hegarty describes all as "an unbelievable thing that I will never forget".

"What a special few hour sin my life that I can look back on forever more," he said of December 13.

Made all the more special by the early morning send-off from Rhebogue from his St Patricks GAA club colleagues, neighbours and friends.

"For some reason everyone was up, I’ve three sisters and a brother and my mother and father and they were all up and there was no need for them to be up so early on a Sunday morning and I wondered what were they doing up. My mother was dropping me in and we came out of the drive and turned right and next thing the whole road was filled with people. You don't want to start thinking about the match at 9.45am because it was still five and a half hours away and you don’t want to start burning nervous energy so I didn’t really process what was going on and just rolled down the window and gave a few thumbs up and said thank you and sent a text to the lads in the club group to say thanks very much that was class. I just parked it then and after the match I was asked about it again and whole thing came back and hit me about how cool a moment it was," said Hegarty.

All very different to 2018 with no homecoming or Liam MacCarthy Cup.

"It was a special couple of day after the game and getting to spend it with the people that really matter like team-mates and family and be able to engage with them was very different to 2018 but very nice."