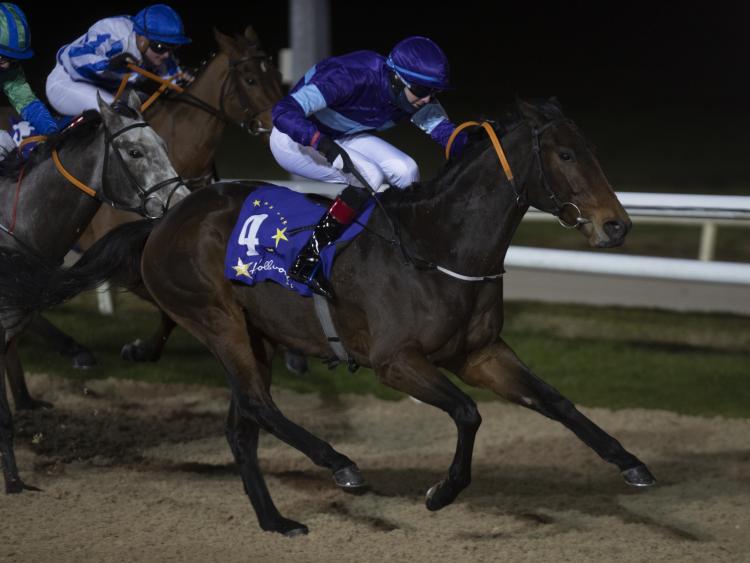 BALLINGARRY, Co Limerick trainer Richard O’Brien struck at the first meeting of the New Year at Dundalk on Friday last where Irish Acclaim landed his second race for the stable in the seven-furlong rated race.

Purchased for just GBP£3,500 at the horses-in-training sales last October, he sprang a 50/1 surprise on his first run for the Kingdom Thoroughbred Syndicate at Dundalk last month and scored at odds of 14/1 this time when getting up late on under Scott McCullagh to beat the front-running Fridtjof Nansen by half a length.

McCullagh reported: “The last day they went too slow and he missed the kick but today I gave him a bit of a shove out of the stalls and he travelled well. They went a good gallop. He seems to be thriving since he joined Richard and he’s done a great job placing him well. Hopefully there is another couple in him.”

Shanagolden jockey Chris Hayes had an easier time, for his first winner of the night at least, as he partnered the Ted Walsh-trained Ferrybank to win the six-furlong maiden. Despite his wide draw, the 11/8 favourite wasn’t long in getting to the front and raced to a comfortable two-length victory over the Kieran Cotter-trained Zen Silence.

Walsh said, “His form was plenty good enough to win and he probably wants an extra furlong. He broke smartly from a bad draw and won well. He’s a grand, sound, honest horse and will win plenty of races. He’s improving with each run. He loves fast ground so he’ll come back here.”

Maynooth, County Kildare trainer John Geoghegan helped Limerick jockey Hayes to a second success when the pair teamed up to win with Chateau Musar to land the opening division of the extended ten-furlong handicap.

In the trainer’s own colours, the 3/1 favourite got up late on to beat the John McConnell-trained Blackstone Cliff by three-parts of a length. Hayes was also in the saddle when Chateau Musar scored over the same course and distance in November.

Geoghegan said, “He seems to be improving and Chris (Hayes) said he could even be a bit better if we step him up to a mile and a half. He’s a nice fun horse and we’ll have to come back up here for another one. I’m delighted with him and we should be able to get into another 45-65.”

Horse Racing Ireland moved quicky to announce new dates for three race meetings that were lost to the weather last week. There was no racing at Clonmel on Thursday due to the severe frost and that fixture has been transferred to Tuesday, January 19.

More immediately, Fairyhouse will race this Tuesday after losing their meeting to the cold snap on Saturday. There is also action from the County Meath venue this coming Saturday where the card features the Dan & Joan Moore Memorial Handicap Chase and the ITM Virtual Stallion Trail Hurdle for four-year-olds.

There will be Grade 1 action at Naas on Wednesday after the course was forced to postpone last Sunday’s card.

The Lawlor’s Of Naas Novice Hurdle is the main event with eight horses, including the Jessica Harrington-trained Ashdale Bob and Crosshill, Henry de Bromhead’s Bob Olinger and the Willie Mullins-trained Blue Lord, set to face the starter. De Bromhead’s Captain Guinness and Mullins’ Energumene clash in the novice chase on a card that gets underway at 12.50pm.

Rusal expansion plans from Limerick plant to be decided in Dublin

Eleanor models a laid-back cosy knit teamed with a pair of ever so cosy, slouchy boyfriend jeans

Built on lands near the Caherdavin Community Centre, the memory garden will remember those who have passed away

Limerick community to remember its deceased with memory garden