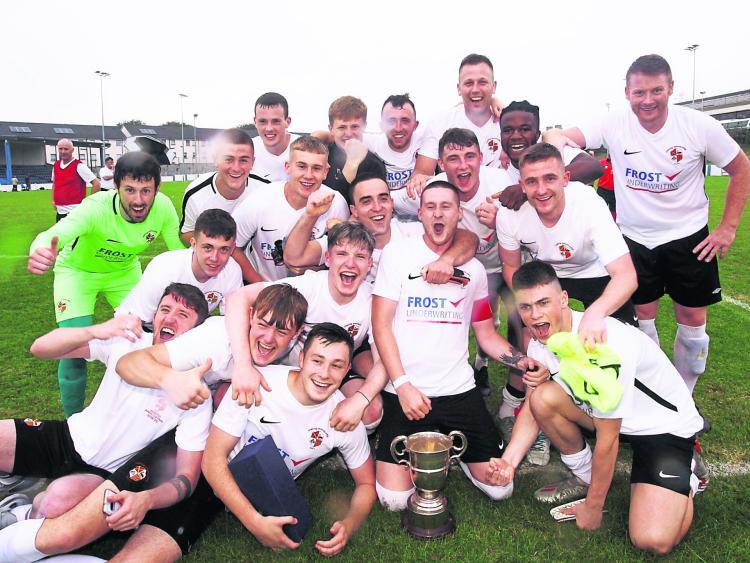 A NEW name was added to the Munster Junior Cup in August as Aisling Annacotty recorded a surprise 1-0 win over Fairview Rgs in the decider at Jackman Park.

Aisling won their first provincial title with a gutsy display that saw them keep a more fancied Fairview Rgs XI scoreless. Aaron Murphy’s goal from close range just before the break proved the decider in an exciting cup tie.

A second yellow card for the influential Clyde O’Connell early in the second half didn’t help Fairview’s cause but they pushed the winners right to the final whistle.

This was the ninth time in the history of the Munster Junior Cup which dates back more than 100 years that two Limerick sides faced off in the final.

Aaron Murphy picked up the man of the match award for his selfless work rate but the winners had fine performers all around the park.

The silky skills of Conor Coughlan are a joy to watch and he caused the ‘View numerous problems. Aisling’s defence was rock solid with the pace of Kennedy N’Dip blanking out much of Fairview’s threat and the experience of Thomas Clarke guiding the side all through.

Fairview will be well aware that they  again had plenty of possession but hardly forced Aisling keeper Brian O’Connor to make a serious save.

Much of the cause was the performance of the winner’s defence which was resolute throughout. Keeper Aaron Savage, AJ O’Connor and Steven Bradley were prominent.

The winning goal arrived just before half-time as Coughlan spread the ball wide to N’Dip. He laid the ball in the path of the on running Brian Butler who skipped past the defence and pulled the ball back across goal where Murphy arrived on cue to blast in from close range.