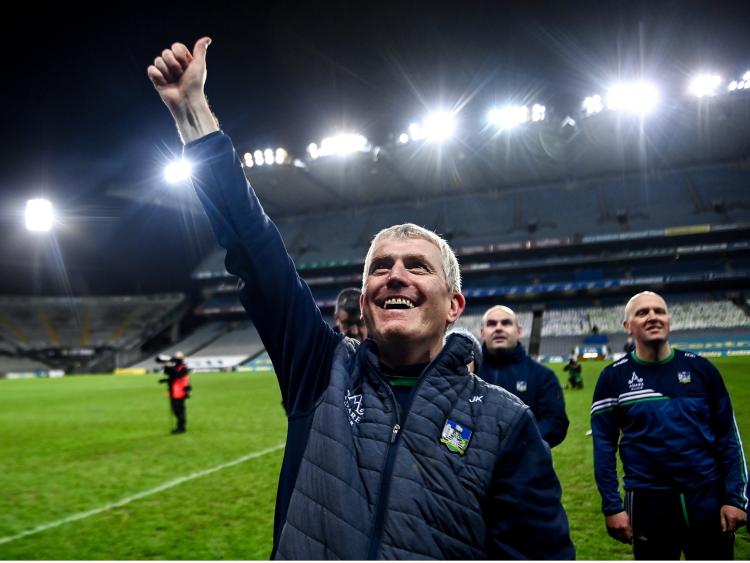 IN a Covid-19 encapsulated year there is something quite metaphoric about the 2020 Liam MacCarthy Cup success being forged not in Mick Neville Park, the LIT Gaelic Grounds or state-of-the-art gyms but in the homes and communities of the 36 All-Ireland SHC winning players.

“I remember watching the boys on a laptop from home doing their training online through Zoom.We had Zoom calls out to them in their garages and gardens and they running around the place, lifting weights and then breaking out into rooms and chatting to eachother and back into it again,” recalled manager John Kiely when speaking with media last Sunday.

“That was a real telling moment in the year for us - how hard they worked through March, April and May - they were relentless! We actually had to stop eventually because they were doing too much.

“The break over the Summer for the clubs was brilliant because they came back in so fresh - they were mad to get back at it again,” he explained.

“I remember our first evening back and I said to myself Oh My God looks at these fellas they were like cattle after coming out of the shed after Winter - they were raring for road. They kept that freshness right throughout the Autumn - it was constantly there and it was the same last weekend and even on Friday night they were bursting to get out onto the field.”

When training did return, Kiely outlined how HSE guidelines were paramount in their thoughts.

“We put a huge effort into keeping the players in an environment that they felt safe in and that they could come together and work hard feeling safe and that took a lot - 2000 temperature checks over the last 12 weeks and players were sent home. If their temperature was slightly above, out the gate they went and home,” he stated.

So Kiely had last Spring, their return to training in September and one more moment where he knew his players were ready.

“The very first play - the first 40-seconds was very defining moment I thought. We took it forward and there was a huge resistance put up against us and we still managed to get a score and that set the tone for us,” he recalled looking down towards the Davin End goals.

“We had obviously very high expectations of ourselves in terms of how hard we wanted to work on the day and I think the players delivered on that in spades - they worked really hard from start to finish right across the pitch.

“It was a very defiant performance - whatever was fired at the boys they found a way to cope with it and going forward I think we showed fantastic teamwork in terms of our support running and lines of running and creating wave after wave of attacks,” outlined the proud manager.

”Overall very proud of the lads - they have worked so so hard. Last year was a huge disappointment for us and to come back straight into it and the resolve they have shown and the determination and the appetite for work right throughout the work was just immense.”

Last Sunday’s title win saw Limerick crowned All-Ireland champions for the second time in three years – not achieved since the Mick Mackey era of the 1930s.

”It’s a source of great pride because we have worked so hard over the last number of years - had we failed to get across the line, we would have had to go back in search again and you can get into a repetitive cycle.

“It’s just reward for this group - they have great inner belief and a great togetherness about them and an appetite for work consistently and we saw that out of that pitch maybe more than anything else today,” said Kiely.

And, along the way Limerick won the Munster League, National League and Munster SHC – a run of wins only previously matched by Tipperary in 1961.

“We are immensely proud of it - it’s a great achievement. We came in in 2017 and we couldn't win a championship match and couldn’t get out of 1B and we went home soul destroyed back in ‘17 and I haven’t forgotten that so we understand the value of winning a match, let alone winning the games that the boys have won this year”

He added: “I have always said to the lads that we have just got to keep working hard and if you work hard enough you will give yourself opportunities.