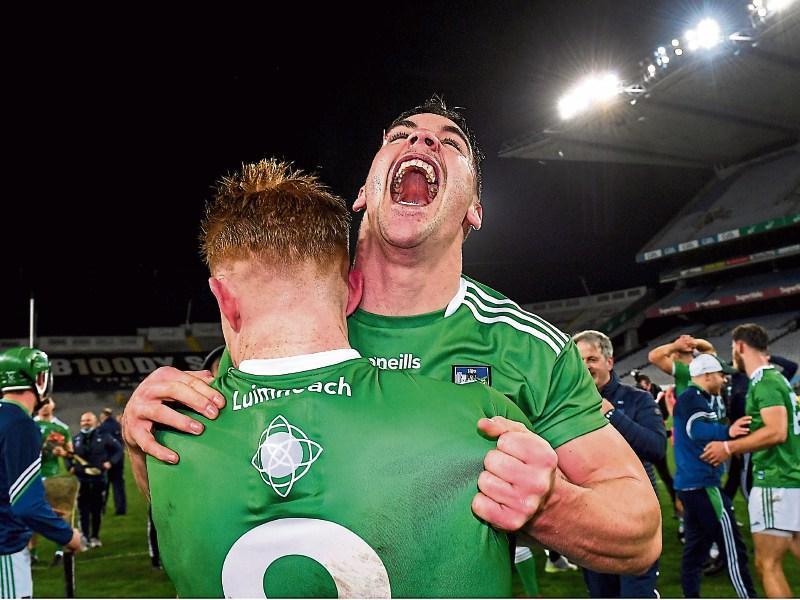 To be honest, I don’t even know where to start!

What a perfect hurling season it has been for Limerick which concluded in December daylight watching Declan Hannon walk up the steps of the Hogan Stand for the second time in three years collecting the Liam McCarthy Cup.

This is also the second time in three times that the league, Munster and All- Ireland trophies will rest on Shannonside.

Sometimes I have to pinch myself and realise what’s going on.

I’m a hurling fanatic, competitive by nature and I hate losing! But, as they say in sport, you lose more than you win.

In recent years for Limerick, they have won more than they have lost.

Start back in 2010 and 2011, back-to-back Harty Cups. Over the next number of years you had Na Piarsaigh and Kilmallock competing and winning Munster championships, Na Piarsaigh claiming an All-Ireland club. Mary I took off in the Fitzgibbon.

The Limerick Academy, which I spoke about last week, started steamrolling.

Including this year, the minors have been in 7 out of 8 Munster finals.

The success story of Limerick hurling over the last decade has been nothing short of remarkable.

6-19 to 2-7! Can anyone remember that? That was the scoreline in the 2009 All-Ireland semi-final when Tipperary demolished Limerick.

In the Hogan Stand that day, there was a man. He took a look around the place as the final whistle blew and said, “I need to try to do something about this”

The following day, he rang a county board official and said he wanted to get involved with a Limerick team, any age, any grade. That man was John Kiely.

In 2010, he was Intermediate hurling manager. That was my first year working with and getting to know John. In 2011, he was coach to the Munster under 21 team that won a Munster championship.

For the following two seasons, he was part of John Allen’s management team which won a Munster senior hurling championship in 2013.

He then went on to become under 21 manager, winning a Munster and All-Ireland championship, before taking over the senior job in 2017. To have the drive, the energy, the commitment, the time and the desire for 10 years now, is just phenomenal.

The key to any success or to achieve success over and over, is modesty. Choosing Declan Hannon as captain in 2018 was a fantastic decision by the Limerick management.

Like everything, it’s easy to say it afterwards when things work out, but it was always going to be the right call.

Go to the dictionary and look up what the word modesty means, and you will find a picture of Declan beside it.

Whatever the circumstance, he never gets too high, or two low. He is a very even character. I first met Declan in Ardscoil Rís in 2005. We played alongside each other for 15 years. He hasn’t changed a single bit, and won’t ever change. He has every characteristic you would want in a lad.

The speech he gave afterwards is a true reflection of his character, always thinking of loved ones and lost ones. He is a gentleman and Limerick are very lucky to have him as captain. He is as steady off the field as he is on the field, and the speech he gave shows that.

From very early on, I knew the game was all over. At half time, Limerick had scored 12 points to Waterford’s three.

Over recent weeks, I have spoken about the lack of goals, and also the lack of goal scoring chances that were being created. Would I be stupid to suggest that goals aren’t as much a driving factor as before?

Against Clare, they scored 36 points, against Galway, 27 points, and against Waterford 30 points. Scoring this amount of points will generally win you games.

Don’t get me wrong, goals are still very important, but the more I see and the more I watch this Limerick team, I don’t think it is as much a driving factor.

Teams are sitting so deep against Limerick because they are so afraid of our full forward line, that more space is being created out the field. I think that’s why our half forward line have been so good this year.

Throughout the whole championship, Limerick have won their games by an average of 7.4 points. That’s incredible really.

Teams haven’t been able to come near Limerick this year in truth. I’m asking myself the question why? And I think a large part of the answer is Caroline Currid.

Caroline was there in 2018. She then left as she had another baby, and returned this year. She is just the most incredible woman and had all the boys, and management team, so spot on. She is so cool in what she does, and that influence rubs off on the players.

I suppose I have tried to keep things low key over the last couple of weeks as I believe people were getting carried away. The issue now is other counties copying us.

Our minors destroyed Cork on Saturday in a phenomenal performance. I was talking to Donal Óg Cusack, the Cork minor manager, on Sunday about it and he was shell shocked, to say the least. He couldn’t understand what happened.

The age profile of the senior team is very young and there are injured players to come back. These lads will want more, there is no doubt about that. They don’t care about unbeaten, or how many medals, they just want to win and keep winning.

I was on The Sunday Game on Sunday night which was nice, and I must credit Declan and the lads in Sextons for Men who made me look presentable which can be a hard thing I can assure you!

But I can tell you very straight that I would dump the suit, The Sunday game and any media duties to be able to still play hurling for Limerick. But I had my time, and now the boys have theirs.

What they are doing for the people of Limerick they will probably never know. We are in incredible times, and I, for one, am certainly going to enjoy them.