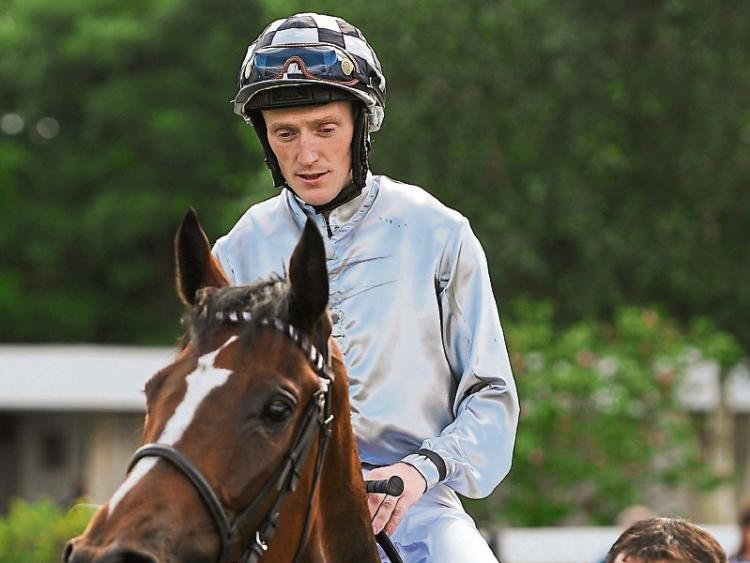 Billy Lee was back in action for the first time since marrying fiancée Catriona the previous Saturday and he celebrated with a double at Dundalk on Friday evening.

He partnered the Henry de Bromhead-trained Flirting Bridge to land the 8f fillies’ maiden, the 3/1 chance making much of the running and gamely holding off the Ger Lyons-trained Split Passion by three-parts of a length. He had an easier time of it on the Ken Condon-trained Let’s which won the second division of the 6f maiden in good style.

The 6/5 favourite beat the Andy Slattery-trained Twilight Man by three and three-parts of a length and Lee is now just two short of riding 100 winners at the track. Chris Hayes rode his second winner of the week as he landed the 8f nursery handicap on the Edward Lynam-trained Chevillon. The 28/1 chance had half a length to spare over the Garvan Donnelly-trained Dha Leath.

The Sheila Lavery-trained Ms Thomspon got up in the final stride under Chris Hayes for a share of the spoils in the second division of the 10f handicap at Dundalk on Monday. The 100/30 chance joined the Leanne Breen-trained Solar System on the line to force a dead-heat.

Ballingarry trainer Charles Byrnes won the valuable Bar One Racing Handicap Hurdle with the Kevin Brouder-ridden Advanced Virgo at Fairyhouse on Sunday. The 14/1 chance skipped clear after the second last flight and soon had the race in safe keeping, beating Cayd Boy by two and three-parts of a length at the line. It was Brouder’s first winner since returning from an eight-week suspension for breaching Covid-19 protocols at Galway in September.

Gordon Elliott dominated Sunday’s stellar Fairyhouse card with a fine four-timer. The undoubted highlight was the taking success of Envoi Allen in the Grade 1 Baroneracing.com Drinmore Novice Chase but there were also significant victories for Ballyadam and Zanahiyr on another huge day for Cullentra. Envoi Allen added to his fine debut success over fences at Down Royal with another superb display under Jack Kennedy. The 2/11 favourite, now unbeaten in ten starts, hardly put a foot wrong as he easily accounted for the Joseph O'Brien-trained Assemble by eight and a half lengths. The Marsh Novices’ Chase is his Cheltenham Festival target according to Elliott who can also have big hopes for Ballyadam, another Cheveley Park Stud-owned rising star. The five-year-old also added to an impressive Down Royal win when scoring a one and a half-length victory in the Grade 1 Royal Bond Novice Hurdle, the 8/15 favourite comfortably accounting for the Noel Meade-trained Cask Mate under Kennedy. The Kerry rider had earlier partnered the Noel and Valerie Moran-owned Zanahiyr to a runaway success in the Grade 3 Bar One Racing Juvenile Hurdle, the three-year-old beating Willie Mullins’ odd-on favourite Saint Sam by 14 lengths and jumping to the head of the ante-post market for Cheltenham’s Triumph Hurdle. Elliott’s big day was rounded off with Jamie Codd partnered Grand Paradis for owners Andrew Brown and Gemma Brown to win bumper at odds of 6/5 favourite. Now unbeaten in nine starts, Honeysuckle scored a back-to-back success in the Grade 1 Baroneracing.com Hatton’s Grace Hurdle at Fairyhouse on Sunday. The undoubted star in Henry de Bromhead’s stable, both she and Rachael Blackmore excelled as they saw off Ronald Pump and Beacon Edge in gutsy fashion. The 4/11 favourite was having her first outing since her Cheltenham Festival win in March and now heads to Leopardstown in early February for the Irish Champion Hurdle, another race she won last season. Her Cheltenham Festival target has yet to be announced.