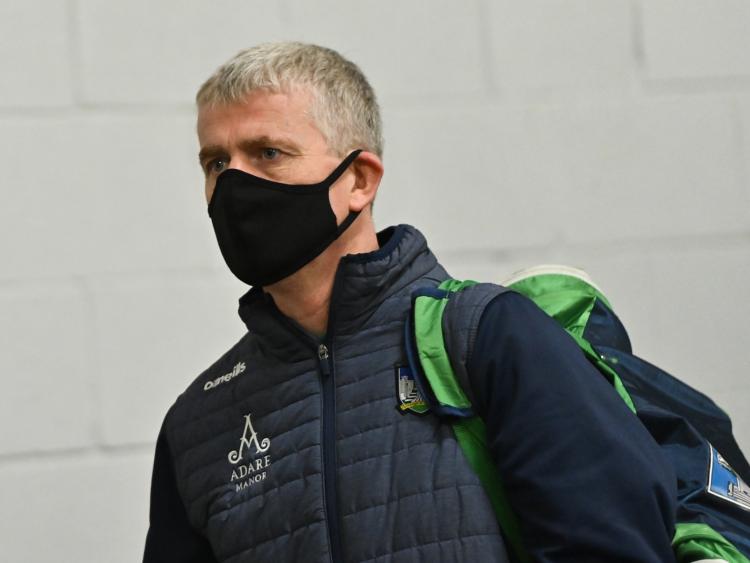 LIMERICK hurling manager John Kiely has made a further appeal with authorities to allow the full panel of players into the All-Ireland SHC final.

Limerick will play Waterford on December 13 in Croke Park in the four game run to the decider, 10 players and a number of members of the extended backroom team have had to watch games at home due to Covid-19 restrictions.

”I hope that will because Level 5 restrictions are finished on Tuesday so I would hope they will, for both counties sakes. For the players sakes on both sides, it’s really important,” he said after Sunday’s nervy three point semi final win over Galway in Croke Park.

“I am very satisfied with the performance because when things aren’t coming as easy as you might like them to come sometimes that can be the day that that you back off it and accept it is not happening today and find it too difficult but the boys embraced that challenge and embraced the difficulty and tried to figure out the solutions to the problems and just kept fighting,” outlined the happy Limerick manager.

“Our boys showed great resilience overall on a night when things weren’t going completely according to plan they dug in and dug in and just refused to be beaten. I think it was just a sheer refusal to be beaten - under no circumstances, no matter what happened were they going to get beaten,” he said proudly.

He explained: “I know the boys worked extremely hard and they were made work very hard for every single ball they got - Galway were very firm in the tackle and didn’t allow us break the tackle too often”.

“I am just really happy with the way our lads responded to the adversity that faced and they refused to be beaten and that’s a fantastic marker for them for the next two weeks - the resilience that they showed, the unity that the team showed and there was a refusal to be beaten on the night. That’s our story of the night,” said Kiely.

“Coming into that water break we were beginning to find a bit more rhythm and probably wouldn’t have preferred to have it and keep going because we felt we were getting into it and finding our range,” recalled the manager.

“We were looking to build on what had happened again for the last 10-15 minutes of the first half and try rise the intensity levels again if we could - that was a real challenge,” he said of half time.

Kiely had some questions re the referee.

“I know some of the frees were definitely frees but I wouldn’t agree that all were - the free count was like 17-7 and it’s quite a swing in one direction. I wouldn’t agree all were - there were occasions when we took the ball into tackles and we didn’t get the same response that the opposition did but it is what it is,” he said.

“We move on and look forward to the next day and have obviously a lot of things we have to work on and we will work really hard for the next two weeks.”