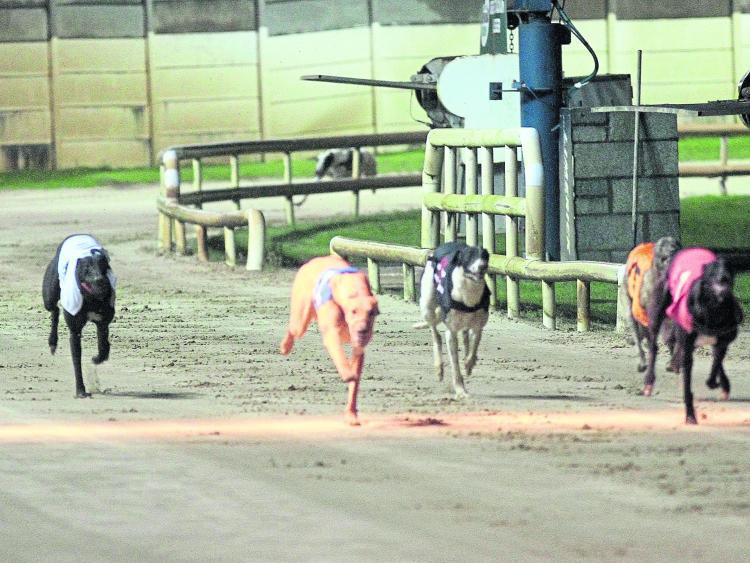 THE final of the 2020 Friends of Limerick Irish St Leger takes place this Saturday night in Limerick Greyhound Stadium.

With racing behind closed doors at present, greyhound racing followers will be able to watch the entire card online at www.grireland.ie

There is €30000 for the winner, second gets €8000, third €4000, and there is €2765 each for the three remaining finishers.
Liam Dowling, Ballymacelligott, Co Kerry is bidding for back-to-back titles. Last year Ballymac Anton claimed the Leger title and on Saturday Dowling has Ballymac Wild as the hot favourite.

Indeed the Kerry runner is hottest of fancies – priced at 8/11 to claim the top prize.

In the semi finals last Saturday, Ballymac Wild had the fastest time of 29.43. The winner had three lengths to spare over Meenagh Miracle for Michael Corr of Coalisland, Co Tyrone. In third and also qualifying was Amazing Alice for trainer Patrick Guilfoyle and Australia based owner Peter Sutcliffe.

The second semi final was won in 29.68 by Cash Ready for trainer Denis Fitzgerald and the Shane Cunningham and the Cash Ready syndicate. A length back in second was Epic Hero for trainer Thomas O’Donovan and owner Gerard Hutton of Co Carlow. In third was Oran Don for Dublin trainers and owners Marie Gilbert and Elliott Whyte and Johnny Crehan.

Elsewhere on the card there were semi finals in the Deerjet Sydney English Derby Winner ON2 525 and a Limerick and Clare GOBA A3 525.

Also on the night Gearoid Kelly and Gerard Kirwan won an ON3 525 with Groovy Jackson. The winner was two and a half lengths clear on the line in a time of 29.22. Second was Aqualified Paddy for Michael Ryan.

Yanky Matt won for Patrick Conway in an A5 525. The winning time was 29.15. A length back in second was Castle Budge for trainer Fintan Kennedy and the RRK syndicate.

Graham Holland had Native Maestro as an Open 525 winner. The Jonn Kelleher owner runner had a winning time of 28.45. Four and a half lengths back in second was Selinas Oscar for Callaghan Corkery.

Nuke Sally won for Timothy Redfern in a sprint. The S4/S3 350 was won in 19.21. Just beaten into second on the line was Cheeky Lily for Trevor O’Connell and A Slater.

There was also the usual racing in Limerick last Thursday.

Billy Guiney had an A5 525 winner with Ballygibba Cave. The winner had a length and a half to spare on the line in 29.57. Second was Coosane Warrior for PJ Ryan.

Bellagors Sting won for Daniel Clack in an A7 525. The winner was eight and three quarter lengths clear on the line with a run of 29.09. Second was Bound ToBe Rosy for Christine Taylor.

Burning Candle won for Paraic Campion and The Amber Banner syndicate. The winning time was 29.20. Second and two lengths back was Adamant Dempsey for John and Seamus Rainsford.

Ballykildea Don won for William Walsh and Donagh Walsh Forde in an A4 525. The winner was four and three quarter lengths clear in 28.91. Second was Eugene Corkery and Carmel Hennessy with Air Pilot.

There was an A6 525 success for Noel Moroney with Wilbrook Sunrise. The winner had a length and a half to spare in 29.62. Second was Coosane Koko for PJ Ryan and owner Amanda Meade.

Donal Casey had Varra Biddy as an A1 525 winner. In 28.93 the winner had a length and a half to spare on the line. Second was Slippery Joe for Pat Curtin.

Chestnut Clint won for Paraic Campion and the Chestnut syndicate in an A4 525. The winner’s time of 29.49 was good enough for a two and a half lengths success. Garryowen Batman was second for Paul O’Brien.

Sean Stack had Loxley as an A2 525 winner. In 28.69 the winner was a length and a half clear on the line. Second was Sharavogue for the Mary Ellens Gang syndicate.

Portumna Hero won for Sean and Edward Lewis in an A3 525. The winner’s time was 29.06. Just beaten into second was Inislosky Romeo for William Casey.

The final race on Thursday was an A4 525 – won in 28.76 by Boyneside Bobby. The Donal and Gary Cooney runner had five and a half lengths to spare on the line after a run of 28.67. Second was Bling Bling Sara for John Meehan.