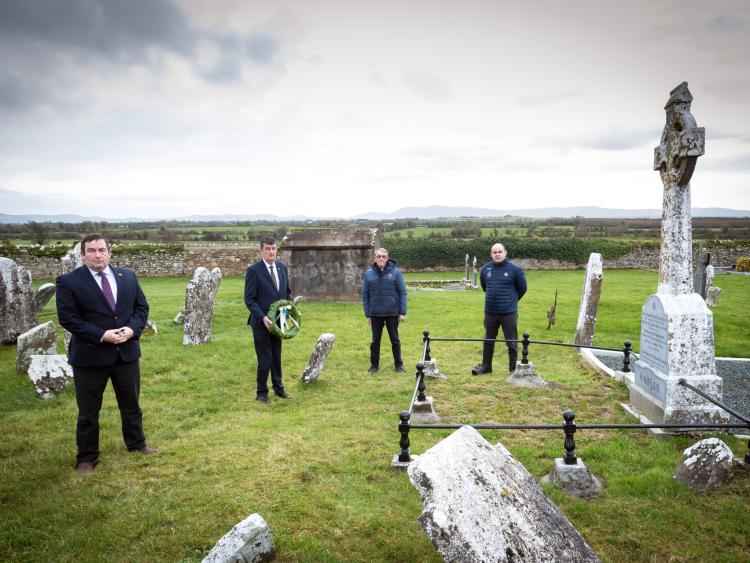 LIMERICK GAA has paid tribute to Tom Hogan, the only Limerickman to have died in the tragic events at Croke Park 100 years ago on Bloody Sunday on November 21, 1920.

From Tankardstown, Kilmallock, Hogan only moved to Dublin earlier that year to work as a mechanic.

Hogan, 19, was the last victim of the massacre at Croke Park - he was shot in the shoulder and had an arm amputated but gangrene then set in following the operation and he passed away the following Friday.

Limerick GAA Chairman  John Cregan laid a laurel wreath at Tom Hogan`s grave at Dromin Graveyard at a private ceremony this week to mark the centenary of Bloody Sunday. The tribute was carried out in accordance with Covid-19 restrictions.

Limerick GAA has also sponsored a commemorative plaque which will be erected by the Dromin Graveyard Committee at the cemetery to honour Tom Hogan in the coming weeks.

“This is a gesture which we are making on behalf of the people of Limerick for all of those who died but in particular one of our own countymen. Tom Hogan attended at Croke Park to enjoy a football match on November 21, 1920  and lost his life as a result," said Limerick GAA chairman John Cregan.

"This was a huge moment in our history and we would love to have a fuller and larger event but have to observe Covid restrictions.”

A barman. A mechanic. Both somebody's son. James Teehan and Tom Hogan were killed by Crown Forces on Bloody Sunday.
Learn more at https://t.co/0YyrIyygwQ #B100dySunday pic.twitter.com/txwqhehIAc

“It is fitting that the GAA recognises these tragic and historic events and we would particularly like to express our thanks to Tom Hogan's extended family for their very dignified engagement in this process. We would also like to thank the Dromin Graveyard Committee for their kind co operation," said Liam Lenhian.

All clubs and GAA premises throughout Limerick are also being asked to fly flags at half mast and in accordance with the request from GAA President John Horan, people are also asked across the country to light a candle this weekend in memory of all those who lost their lives on Bloody Sunday.