Opinion: 'The beauty of winning is the craic' - Shane Dowling 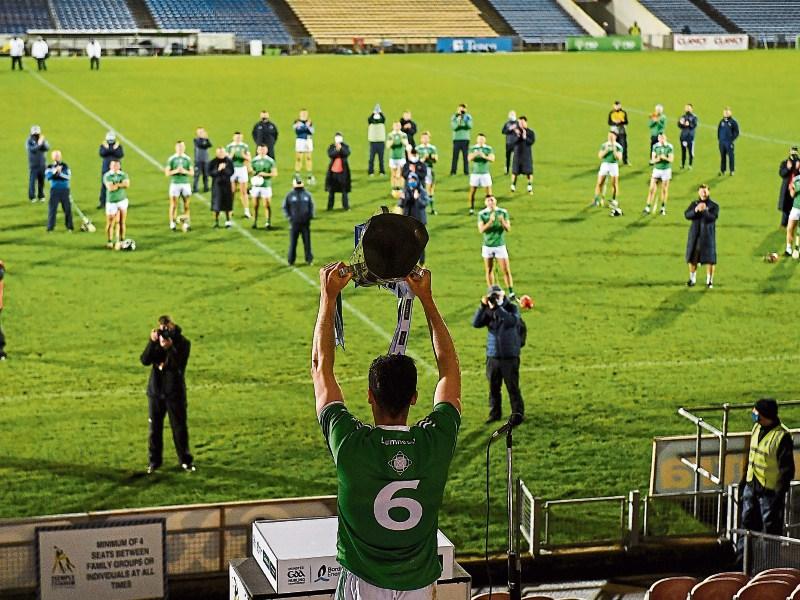 A long way from the snug: Limerick captain Declan Hannon lifts the cup in front of his team-mates in an empty stadium after the Munster GAA Hurling Senior Championship Final

A MUNSTER Final like no other. We can all go on about there being no supporters, no family, no celebrations blah blah, but the one thing that does not change, and won’t ever change is the history books, which read: Limerick, Munster Senior Hurling Champions 2020.

Of course it was a strange occasion, but what was the strangest for me was when RTE eventually showed Declan Hannon lift the cup.

All I could think of was when ‘Dodge’ (Donal O’Grady) lifted the trophy only 7 years ago in 2013 in the Gaelic Grounds for the first time since 1996. Carnage. Mayhem.

Trying to get through supporters to get up to the podium was unreal, and it really showed what it meant to the county to win that day. So to witness what happened last Sunday was so surreal. It couldn’t have been further from those 2013 scenes.

I remember in the aftermath of that Munster Final, with all the celebrations, speeches and so on, we were waiting for a long long time to get going.

Declan (Hannon) and I came up with an idea - we decided we would take a trip down the Ennis Road, head for a quiet spot in Na Piarsaigh to sample one!!

So off we went. Two young ‘buckos’ walking down amongst all the thronged supporters en route for a pint, with no supporters having a clue who we were.

We landed into a wedged Na Piarsaigh, and I had Barry the barman tipped off. He directed us into the quiet snug, and brought us out a pint each.

There we were, sitting down on our own having a drink, after winning a Munster title. And not a care in the world!

One or two came in to say hello, but that was about it. There was music out the back, and we were asked would we call out and sing one. No way, no chance, not a hope!!

One or two more later, where were we? Out the back, singing Limerick You’re A Lady as a duet in front of hundreds of supporters!

I’m sure it didn’t make for pretty listening but we had some craic!

Across the road to The Greenhills we headed to meet the boys for the food before we got ready for the night ahead.

Nowadays, you wouldn’t dare dream of doing the same - you would hang around with your own team mates, have plenty of banter and sing songs and go from there. It was only 7 years ago, but times have changed so much since then.

In the aftermath of Sunday’s win, the best it got, I would imagine, is a few lads sitting at home having a few drinks.

We really did take them times for granted. The beauty of winning is the craic that you would have afterwards for a few days.

Memories created to last a lifetime. And I am so fortunate to have created many memories, and no doubt when the boys are able to again, they will create more.

In terms of last Sunday I was so surprised with the talk leading up to the game. If Waterford were to believe what they were to read, they should have stayed at home. Nonsense. People saying it was an under par performance from Limerick. Also nonsense.

For me, it was one of Limerick’s most impressive performances this year. Waterford came with exactly what I thought they would - a savage workrate, savage pressure, huge intensity and a great battling quality. And Limerick answered every call.

I was asked the question, ‘Who was Limerick’s best performer?’ And my answer was not straightforward.

Peter Casey was unreal in the first half, as was Graeme Mulcahy and Cian Lynch. ‘Hego’ was quiet, but popped up with two unreal scores when they were finding them hard to come by.

Kyle Hayes stormed into it in the second half, as did Diarmaid Byrnes and Sean Finn. To be honest, defensively, all 6 were brilliant, and didn’t give Waterford a sniff of a goal chance.

For me, it was exactly what I would have liked to happen, and what I thought would happen.

Limerick got a really tough physical encounter, and had to dig deep in the final quarter and I do believe this will stand to them, and also, what I thought would happen in terms of getting such a hard game, but just pulling away in the end, will stand to them too.

Daithi Dempsey (assist), Adrian Breen and Seamus Flanagan with a point each, all contributed coming off the bench.

All round, I think Limerick are in a good position and exactly where they want to be. I would like to heartily congratulate them, and I know around the four walls they will be over the moon with the last four weeks, and will have a big spring in their step looking forward to two weeks' time.

This weekend will see either Galway or Tipperary exit the championship, and that will be a massive game. If Galway can recover from their agonising loss at the weekend, I would predict a Galway win.

When it comes to Clare v Waterford, well, I fancy Waterford here, but then again I didn’t think Clare would get over Wexford either, and maybe they are turning a corner.

I have just been very impressed with Waterford this year, so my final four will be Limerick, Kilkenny, Waterford and Galway.

What a four that is.