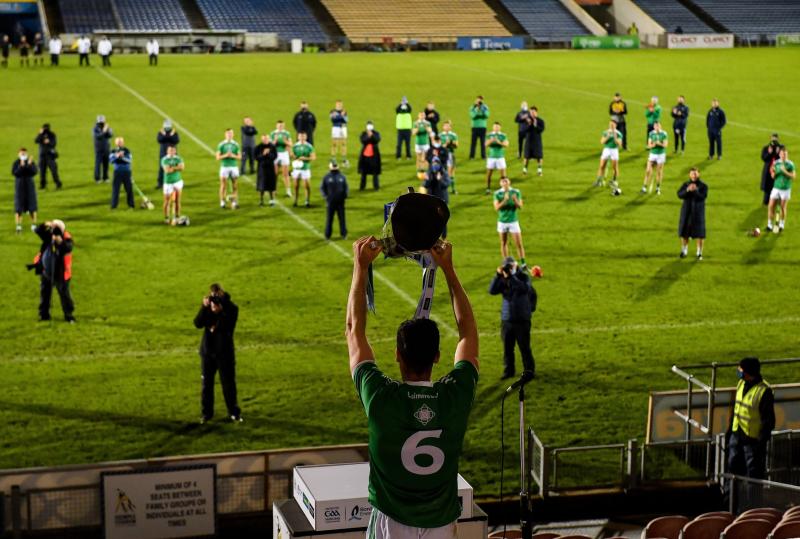 IT will be a picture that will take some explaining in years to come – Declan Hannon lifting the Munster SHC trophy in an empty Ardan O’Riain.

A picture tells a thousand words the old saying goes and this very much rings through for 2020.

No ecstatic team-mates joining Declan Hannon in the stand to loft the trophy high to adorning fans in the stands – or in Limerick’s case more likely on the pitch!

Instead the players and mask wearing substitutes, stood, socially distanced on the hallowed turf of Semple Stadium as Hannon lifted the provincial trophy for Limerick’s 21st time.

And, that was it – a couple of seconds of a ceremonial lifting of the cup.

No victory speech, no emotional embrace from proud Limerick man and current Munster GAA chairman Liam Lenihan and no live television of the moment.

Indeed Hannon didn’t even carry the trophy back down to his team-mates – all similar to a few weeks previous and the Allianz League final victory over Clare. All very 2020, and all Covid-19 necessitated.

But the history books will show Limerick as 2020 Munster senior hurling champions and that was the main objective in Thurles last Sunday.

Attention now turns to Sunday November 29 and a Croke Park semi final – a third year in a row in the last four of the championship.

Indeed the first time ever that Limerick will play in three successive All-Ireland semi finals, given that back in the 1930s when Limerick won four-in-a-row in Munster they received a bye directly into the All-Ireland final in two of the years.