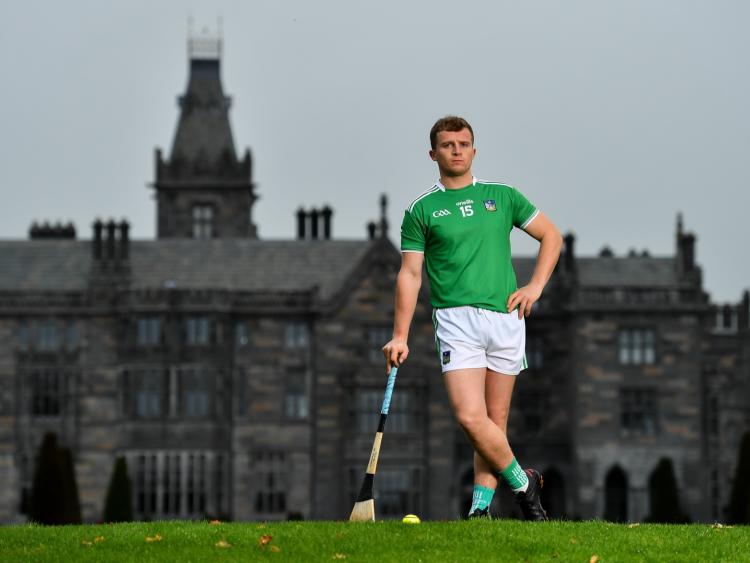 Limerick's Peter Casey pictured at the Adare Manor during the All Ireland SHC launch. PIC: Sportsfile

LIMERICK hurler Peter Casey graduates from Limerick Institute of Technology this Friday and while he is in the market for full-time employment, Croke Park is firmly on his mind.

"I am trying to get the gown ready and pick out the shirt for the photo - well the mother is! I’m not too pushed on what shirt I wear!" laughed Casey this week.

"It’s a fantastic achievement to graduate from college and I know it’s different times and we have to do it through Zoom but that is the new norm and something we just have to get used to," added the popular Na Piarsaigh man.

Casey was speaking with the media, via Zoom, at the launch of the national series of the All-Ireland SHC.

His and Limerick's determination to at least "go one step further" than the 2019 All-Ireland SHC semi final defeat is clear.

"We are there now but we were in this situation last year where we had won the league title and won Munster and all of a sudden we were dumped out for a lacklustre 20-minutes," he recalled of the slow start that hurt Limerick in the 2019 loss to Kilkenny.

"It’s old history - what happened last year, happened last year. Was it a goal to get back to Croke Park this year? Of course it was but we were solely focused on one game at a time and we focused on just Waterford last week and after we find out who are are playing next week it will just be sole focus on who ever we are playing," said the corner forward.

"We were obviously deeply disappointed with how we performed last year in an All-Ireland semi final - we just left ourselves too much to do really. We knew we didn’t hurl as well as we can in the opening 25-minutes. It is a goal to get back to Croke Park - it is every players dream to get to Croke Park and to play in All-Ireland semi finals and finals. Hopefully we can go one step further than we did last year."

He explained: "We are taking it one game at a time and we haven’t looked at getting to an All-Ireland semi final because we were just focused on each individual game and once we find out next who we are playing, we will focus on them and try to get a performance to go one step further than last year".

It's the first time ever that Limerick will play championship hurling in Croke Park in three successive seasons.

"It's great to get so much exposure to Croke Park - it’s the best stadium in the country and we are very fortunate to be playing in there whenever we can. When you are playing in Croke Park you know you are in the business end of the championship and that’s exactly where we want to be and hopefully we can go one step further than last year."

Reaching a third straight semi final has happened because of Limerick's one-game at a time mantra, according to Casey.

"We solely focused on one game at a time - the first game it was Clare and the second game it was Tipperary and then this was Waterford, so just another game."

"We knew they were going to bring a huge challenge and thankfully we got over the line but it was a real battle out there. Talking to a few people afterwards and they seemed to think it was just a case of us turning up but we didn't look at it like that at all - we knew it was going to be a right battle. Waterford are a ferociously well organised side and work hard. They are a young athletic side and we knew what they were going to bring with their running game and that was something we had to be cautious about. Hopefully it will stand to us in two weeks time," he outlined.

The sides were level at 0-18 each at the second half water break but then Limerick found seven of the final 10-points to retain the provincial title.

"It's down to experience - a lot of these players have been around the block for the last two or three years and there is a great group there and whenever the pressure comes on us we can come up with the answers and that’s a great trait to have and hopefully that continues leading up to the All-Ireland semi final on November 29."

Back in Limerick's 2018 All-Ireland winning run, Casey, Shane Dowling and others were sprung from the substitutes bench to great effect. This season, Seamus Flanagan, David Dempsey and others are proving just as effective.

"The term finishers is flying around rather than substitutions. Every player wants to start and every player wants to play every second on the pitch in a Munster final or an All-Ireland semi final but it’s great to have the competition inside in the Limerick camp at the moment and it’s so so competitive that if you don’t play well in one night of training that could be the cost of you not starting the next day," explains Casey.

"Limerick haven’t had that type of competition in recent years so whatever role you are given, you take it and do what is best for the team. Whatever role I have to do, I will do it for the team and if that means coming on and doing the same thing I would do that too."

"You are travelling to training and to games on your own and it is lonely enough - especially driving home from games and it’s has been ok for the last few games when we are winning you but don’t want to be driving home on your own if you are losing! Its completely different but it is the new norm for us players and something that we are now used to and even playing games behind closed doors is different but again it is something we are used to from playing Av B games with no one there. As a player you still feel every bit of the intensity when you are playing - the last day against Waterford were was a ferocious intensity I felt in that opening half and just after half time but we knew they were going to bring a huge battle like that. The crowd obviously play a huge part in galvanising teams but we are solely focused on ourselves and we don’t get into things like that - myself personally I still think the intensity is there from teams and you can definitely feel it out on the field."

October and November are slightly different weather-wise to June and July?

"Of course there is a difference and especially when you are so used to playing in the Summer when it is lovely and warm - the Munster final last year was a beautiful day in the LIT Gaelic Grounds and then look at the Munster semi final this year against Tipperary and it’s chalk and cheese. We are well used to it - well used to training in Rathkeale when it’s snowing in late December and early January, so we are well used to it."