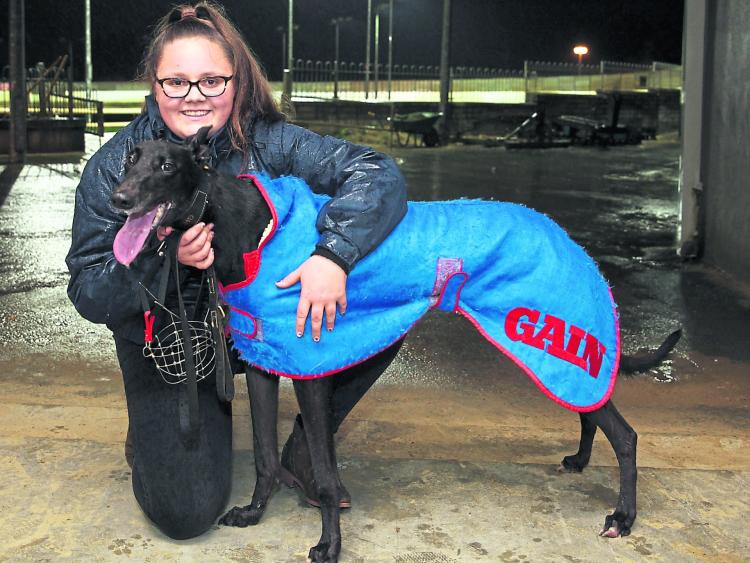 THE Friends of Limerick Irish St Leger is down to the quarter final stage this Saturday.

Twenty four dogs remain in the race for Limerick’s big classic of the year after last weekend’s round two heats.

There were eight heats with NewInn Session the headline run with a winning time of 29.60 in heat three.

The Graham Holland trained runner had three and a half lengths to spare on the line. The impressive Ballymac Kingdom was second for Liam Dowling with Rathcoole Fox also qualifying in third – also trained by Holland.

The round two heats began with a win for Ballymac Wild. Another Dowling runner, Ballymac Wild won in 29.95 and by two lengths. Second was Own Spice for trainer John Browne and owner Thomas O’Doherty. In third was Razldazl Monarch for trainer Nelius O’Connell and the Kildare-Kilcolgan syndicate.

Oran Don won heat two. Trained by Marie Gilbert for Elliott Whyte and Johnny Crehan, the winner had four lengths to spare on the line in a time of 29.86. Second was Out Numbered for Bernadette Diskin Holian and Basil Holian and trainer Mark O’Donovan. Denis McCarthy had Springwood Vardy in third.

Another heat winner for Graham Holland was Black Parachute. The winning time was 29.75. Two and a half lengths back in second was Blastoff Fire for Philip Buckley with Magical Jasper in third for Patrick and Alice Guilfoyle.

The Patrick Guilfoyle trained and Peter Sutcliffe owned Amazing Alice was another impressive winner. Heat Six was won in 29.65 and by four lengths. Second was Feudal Spirit for Graham Holland and Larry O’Rourke, while third was Cash Ready for Denis Fitzgerald.

Minglers Popeye won Heat Seven for Eddie Moore. In 30.01 the winner had a length and a half to spare on the line. Second was Meenagh Maestro for Michael Corr, while Knockboy Flight was third for owners John and David O’Herlihy and trainer Kevin McLean.

The final round two heat was won by Michael Corr with Meenagh Miracle. The winning time was 30.29 with all of nine lengths to spare on the line. Back in second was Congress Thunder for Paul Hennessy while third was NewInn Hero for trainer Holland and owners Simon Taylor and Marc White.

Elsewhere on the Saturday night card in Limerick, the opening race of the night was an ON3 525 – won in 29.63 by Athlacca Vision for Noel Neenan. Six lengths back in second was Corcass Hope for Micheal Murphy.

Cherrygrove Bear won and A6 525 for John Murphy. The winning time was 29.45. Two and a half lengths back in second was Hidden Daddy for Pat Conway and owner Josephine Garvey.

Later in the night, Murphy concluded his double when Cherrygrove Snow won a sprint. The 350 was won in 19.10. Beaten four and a half lengths into second was Orlando Joseph for Breda Hayes.

The final race of the night was an A5/A6 525 – won in 29.47 by Honeypound Gold for Michael Carmody. Just beaten into second was Blastoff Butch for Leo McNulty.

Ahead of the quarter finals, NewInn Session is the 4/1 favourite, followed closely by Ballymac Wilfe at 9/2.