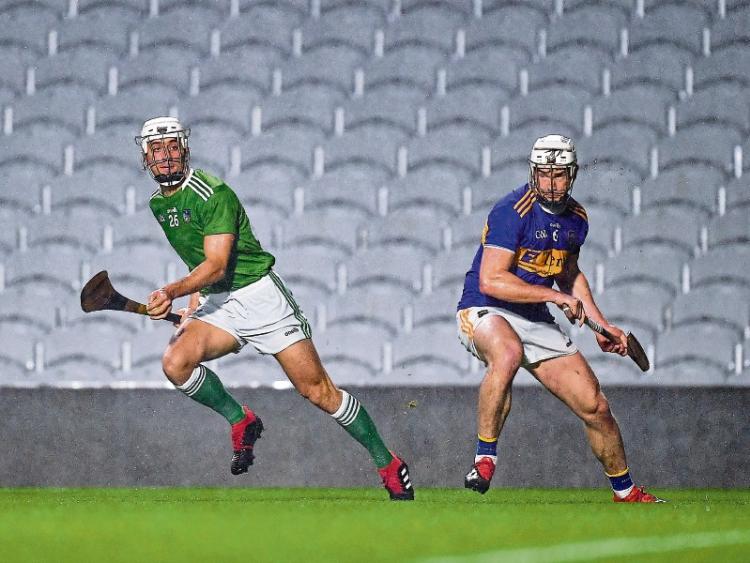 Pat Ryan in action for Limerick against Tipperary

August 10, 2014. Can anyone remember what was played on that day? Limerick versus Kilkenny, Croke Park, All-Ireland semi final.

It was the craziest game and conditions I have ever played in. We ran out for the warm up, and the sun was shining, then it started to rain and I was hoping it would go away.

For a finish, it got so bad I remember just saying to myself, ‘the heavier this gets, the better it will be’.

My abiding memory of that game was getting a free about 37 yards out, in front of the goal. I knew I had no chance of scoring it. I looked around to see if anybody else was on the same wavelength as me, and thankfully, Declan Hannon was.

He made a run, I scooped the ball 13 metres in front of me, and he ran onto it and put it over the bar! That will tell you how bad it was.

I thought I would never witness anything like it again. But I tell you one thing, Sunday came very close.

I was fortunate enough to attend the game as I was doing co-commentary for Live95.

I was chatting to one journalist before hand who asked me, ‘whose conditions will these favour?’

I replied ‘boss, they're hurlers, not ducks, these wont favour anybody’.

As it turned out, I was wrong. Hail, rain, wind or snow, it doesn’t matter for Limerick. Think of, Kilkenny in the league last year, we played against a gale in the second half, beat them well.

Clare in Ennis last year, it was like the Antarctica, got a draw, and Sunday, a monsoon, and Limerick delivered.

It actually took me awhile to realise Kyle Hayes went to wing back, and Cian Lynch to centre forward.

The minute the ball was throw in, it developed like so. Aaron Gillane stayed deep at all times, with one other.

Everybody else was in the middle third. Jake Morris stayed deep, and he was there on his own. Liam Sheedy had no choice but to bring out Seamie Callanan to try get him on ball, as they couldn’t get ball in due to the conditions, but mainly, Limericks workrate.

Seamie Callanan had as poor a day at the office as I have seen. He set up Jake Morris for a goal, and in fairness, it was top class vision from him, but besides that, he was non existent in the game.

Going back to the move that was made pre-game, it was an interesting one. Kyle got man of the match in the All-Ireland two years ago at centre forward, but also played in the half back line for Limerick all the way until senior. He was brought back there on a couple of occasions during games over the last two years, but generally late on in the game to see it out.

I certainly didn’t see it coming, and it will be very interesting to see whether that is a permanent move or not.

With Cian, to me it's more or less the same as he will be still playing in that middle third anyway, so its not as big a change for him.

I knew at half time, it was game over, and I'll tell you why. Limerick, are incredible at running the ball, in the simplest of ways. What I mean by that is when you look at Wexford, they do a lot of running but to me, it looks very complicated.

With Limerick, against that gale, it's simple. Whoever has the ball, run! Take your man on, and you can be guaranteed you will have a support runner to pop it off to. And you keep doing that, until you are in an optimum position to deliver the ball to your forwards.

That way it takes out any risk of not been able to clear the half back line, or hitting a blind ball and not knowing where it will end up.

I said here last week that it would be great if Limerick could create more goal opportunities, and that I was delighted to see. We got three, and could have hung 5, or 6.

Specifically, I said when we were getting into certain positions, to go that extra bit. Hegarty got dragged down for the penalty, he took the man on, Daithi Dempsey came on, ran at the defence and was unlucky not to score one, and from that play, Seamie Flanagan took the defender on before scoring his goal.

I do believe it makes a big difference, and if you do that repeatedly in games, you will generally get your reward!

The Limerick ‘finishers’ were top class when they were brought on. Yes, finishers, not bench. Some teams have a bench, but Limerick have finishers. These boys are brought on to finish the game out, and again, every one of them contributed, be on the score board, tackles, or assists.

What was most impressive for me, at all times, was the response, every time Tipperary came back.

When Tipperary got a goal, we got one straight away.

We responded very well to the ‘illegal goal’ and to the three points at the start of the second half.

When Tipperary brought it back to six points, we rallied, and responded every time, and that for me, was most impressive.

It sets us up nicely for a Munster final in two weeks time, and I have no doubt the boys will go away, work hard, keep the heads down, and be ready for then.

Our job? Calm down, and don’t be getting carried away with the nonsense out there. We have a long way to go yet!

Congratulations to Billy Lee and the Limerick footballers on a great win last week, and best of luck this weekend and please God both our senior teams will be in a Munster final after Saturday night.

Last thing - I think it is an absolute disgrace that the GAA are only allowing 40 people per team into the grounds.

This is shocking and makes no sense to me. If they allowed 10-15 more bodies per team then everyone is included.

I think of the kit man, liaison officers, various other members of the back room team who give up so much time. Who attend these games and set up everything for the players to ensure the highest standards are met, and are then asked to leave the grounds and they have to watch the game outside in a car on their phones or laptops.

The injured players and the extended panel members, who train 5 nights a week, and put as much pressure on the other lads to ensure they will be ready the next opposition.

If they only rose the number to 55 people per team, everyone can be there. I feel very strongly about this, and think they should re consider it.