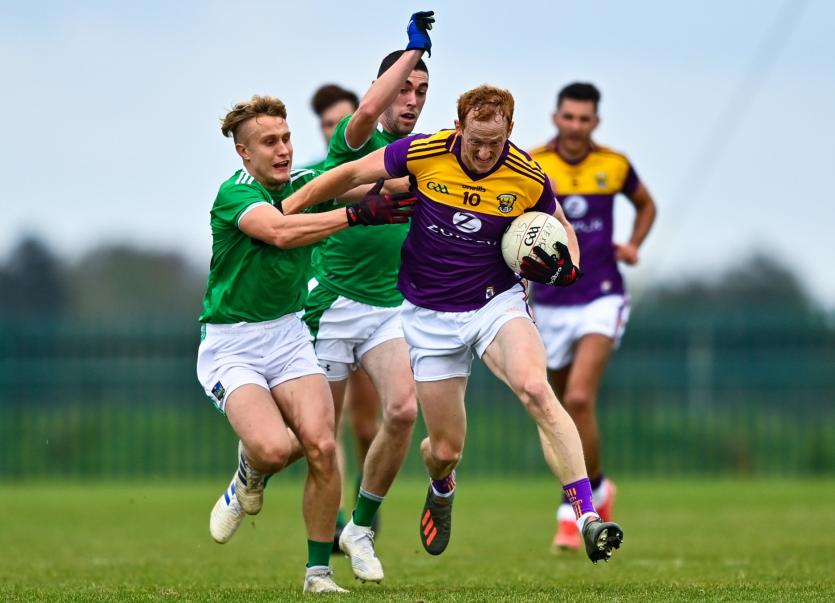 LIMERICK'S promotion hopes took a setback this Sunday afternoon with defeat to Wexford in round six of the Allianz Football League.

Limerick must now go to Sligo and get a victory next Saturday if they are to end a four year stay in Division Four.

But there are six teams that can still matamatically force their way into the top two promotion places - Limerick, Wicklow and Wexford are all on eight points, Antrim on seven and both Sligo and Carlow are on six points.

But Limerick did battle back in the second half - ending with 11 wides, compared to four for Wexford. Limerick also had five unconverted goal chances, while the Wexford goal in the 32nd minute of the opening half was fortuitous.

Three Ben Brosnan frees and two John Tubritt points from play helped Wexford into a 0-6 to 0-2 lead at the first half water break.

The visitors to west Limerick had three points scored before Adrian Enright opened the Limerick account in the 11th minute.

They had six points on the scoreboard before the next Limerick score - from Padraig Scanlon in the 17th minute.

A 31st minute effort from Scanlon was the only other score from Limerick in the half, in which they had five wides - some from frees.

The Wexford goal came in the minutes just before half time - long serving midfielder Daithi Waters kicking for a point from distance but his effort was dropped under the crossbar by unfortunate Limerick goalkeeper Donal O'Sullivan.

Trailing 1-8 to 0-3 at half time, Limerick made three half time substitutions.

Billy Lee's men bossed the next quarter and four successive scores left it 1-8 to 1-6 with 16-minutes lapsed in the new half - Wexford were down to 10-men for this period due to a black card.

The Limerick goal came in the third minute of the half - two substitutes combing - Sean McSweeney attempted for a point but when his effort dropped short Tommy Griffin flicked to the net.

Iain Corbett and Darragh Treacy added points and now the lead was down to just two points.

But Wexford put a half to the Limerick momentum and four quick-fire points for the Model County had their advantage back to 1-12 to 1-6 and the game inside the final 10-minutes.

With another blackcard for Wexford, Limerick again got on the forward foot - Tony McCarthy, Corbett and Cillian Fahy kicked points and it was a one score game as the fourth official confirmed five minutes of injury time.

Brosnan increased the lead again for the men from the south east before a Hugh Bourke free left Limerick needing a goal.

So instead of being crowned champions, Limerick now need to go to Sligo and get a win to ensure promotion.