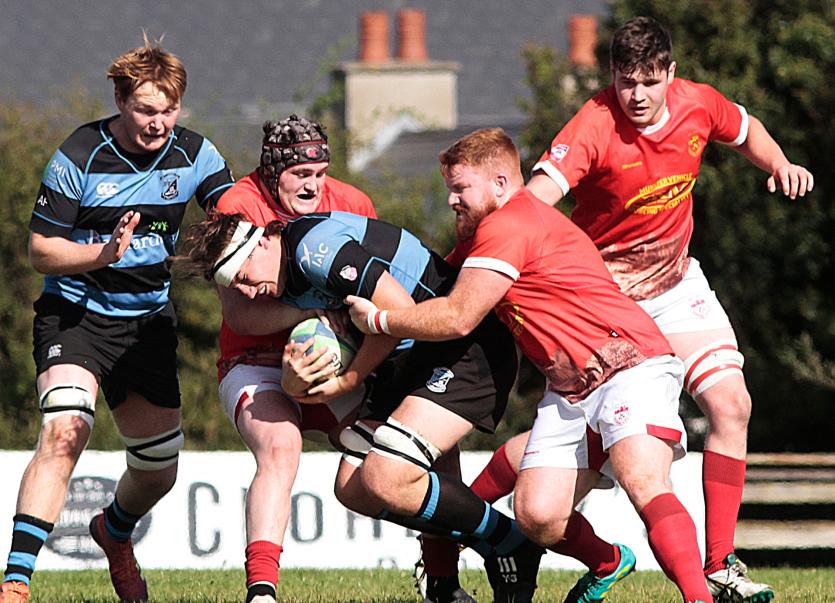 IT was an opening day of mixed results for Limerick clubs in the new Energia Community Series.

Meanwhile, in the same conference, Garryowen drew 22-22 away to Highfield, while Shannon fell to a disappointing 30-36 home defeat to Cashel in a high-scoring affair at Coonagh.

Also in the top flight, Old Crescent were forced to give second best to Cork Constitution 19-54 in their opening round fixture at Temple Hill.

Bruff got their campaign in Munster Conference 2 off to the best possible start when recording an impressive 32-14 bonus point victory over Sunday's Well at Kilballyowen Park.

UL-Bohemian had a bye in the opening weekend of Conference 2 fixtures.

Young Munster scored six tries in their impressive victory over UCC, recorded a week after the Clifford Park side knocked holders Cork Con out of the Munster Senior Cup.

Munsters' enjoyed a 19-7 half-time lead at Greenfields, thanks to first quarter tries from Aaron Hennessy, Luke Fitzgerald and a penalty try.

The home side added another three tries after the restart with Fitzgerald grabbing his second of the game, while exciting scrum-half Donnacha O'Callaghan and Huw Worthington also dotted down. Out-half Evan Cusack also kicked a penalty and three conversions in the second half to go with two first half conversions.

Munsters' will be pleased to have Colm Skehan back in action after a lengthy lay-off which spanned almost two years.

Meanwhile, a youthful Garryowen side had to be satisfied with taking two match points from their 22-22 draw at Highfield.

Shannon managed to pick up a try bonus point on a frustrating opening day home defeat to a resolute Cashel side at Coonagh.

The match produced no fewer than 10 tries with the visitors scoring six of them. Cashel's powerful maul proved a potent weapon for the Tipperary side throughout, while Shannon's line-out also misfired.

Cashel led 19-13 at half-time, despite the home side leadine 7-5 early on through a try from Keelan Stephenson which was converted by John O'Sullivan.

Cashel hit back with their opening try from a maul soon after and were good value for their six point interval lead.

Two Cashel tries at the start of the second half, the second a penalty try awarded after Shannon were judged to have illegally tried to halt another well-executed maul, saw the AIL Division 2A side race into a 31-13 lead.

Shannon did manage three second half tries through Ikem Ugweuru, Ronan Coffey and Ben Daly to secure a bonus point, but there was no doubting Cashel's superiority on the day and they deservedly left Coonagh with a maximum five-point haul.

Meanwhile, also in Conference 1, Old Crescent trailed Cork Con 14-28 at half-time in Temple Hill. The Limerick side led 7-5 early on with a Daniel Hurley try, converted by Ronan McKenna.

Crescent were also awarded a first half penalty try when Jack O’Mahony was tackled without the ball in a race to the touchdown.

Con added two more tries in the third quarter to stretch clear, before Cathal Monaghan struck for a 63rd minute try for Crescent.

Two late converted tries for the Leesiders saw them increase their advantage in the final quarter.

Next week's games in Munster Conference 1 will see Garryowen host Cork Con at Dooradoyle, while Old Crescent entertain Young Munster in a Limerick derby, while Shannon will be aiming to pick up their first win of the campaign when travelling to UCC.

Bruff will be pleased to get their Conference 2 campaign off to such an impressive start at Kilballyowen Park.

Bruff laid the foundation for this win in the opening half after which they held a sizeable 22-0 advantage.

While the 'Well managed two second half tries, Bruff were always in control and succeeded in crossing for the bonus point try.

Bruff travel to Clonmel for their second round fixture in Conference 2 next Saturday, while UL-Bohs kick off their campaign at home to Dolphin.