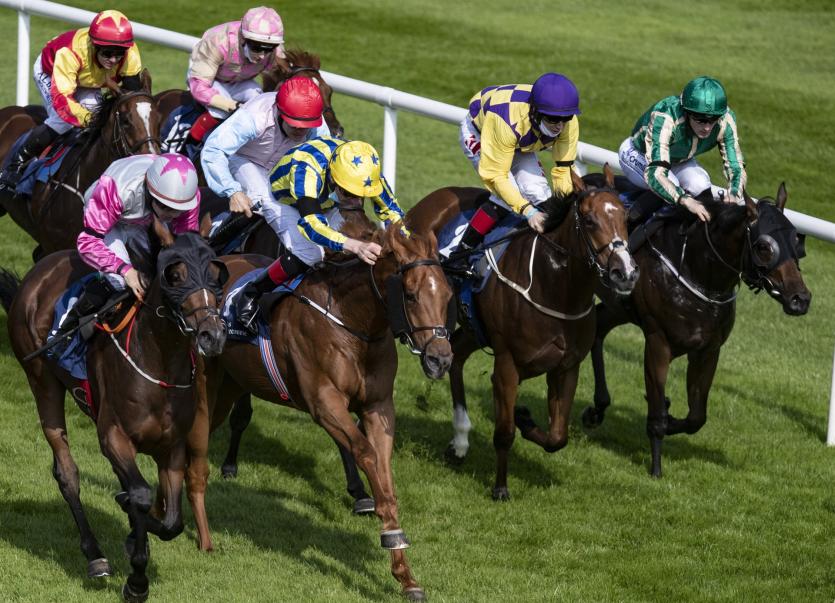 TRAINER Paddy Twomey is having a terrific season and Haifa, having his first start for the barn, landed a gamble in the second maiden at Tipperary Monday under Billy Lee.

It was yet another winner for Ballingarry jockey Lee as 3-1 chance Universal Focus got up on the line in division two of the mile-and-a-half handicap at Cork on Wednesday.

And in the following race, the first division of the Junction Handicap, Clogher trainer Austin Leahy saddled 15-2 chance Ask Delaney to score under Paddy Harnett, the promising Abbeyfeale rider.

Mark Enright has done really well reverting to rides on the Flat this summer. The Castlemahon pilot was seen at his strongest in the claimer at Naas on Thursday, lifting home 16-1 chance Mass Gathering for Fozzy Stack.

And Enright was praised by trainer Eddie Lynam after winning again on Chagall, sent off 11-1, in the first division of the Irishinjuredjockeys.com Handicap on Friday. Helen De Portales, expertly ridden by Billy Lee, held on well in the mile handicap at odds of 13-2.

And there was more Limerick success on the evening as Chris Hayes teamed up with old boss Kevin Prendergast as 7-1 chance Alhaakm landed a nice gamble in the Crowne Plaza Hotel Dundalk Handicap.

Shane Foley ended the week just four clear of a closing Colin Keane in the jockeys' race, thanks to another winner provided by Moone trainer Jessica Harrington, who provided her stable jockey with 3-1 chance Zaffy's Pride, which won by three parts of a length in Dundalk's Irish EBF Median Sires Series Maiden.

Willie McCreery and stable jockey Billy Lee struck twice at Gowran on Saturday, Epona Plays having a memorable success in the feature Denny Cordell Lavarack & Lanwades Stud Fillies Stakes, a Group 3, at odds of 9-2, before 16-1 chance Insinuendo produced a smart performance at odds of 16-1 in the  Golf Membership From 600euro Fillies Maiden.

Last Tuesday the racing community lost one of its brightest stars. Nine-time Irish champion flat jockey Pat Smullen was a totemic figure in Irish racing, a rider of the highest calibre and an inspiration to so many both during his storied career and since his retirement. His passing will be felt heavily by the Irish racing and sporting community, but most especially by his family and friends, his wife Frances and children Hannah, Paddy and Sarah.

Brian Kavanagh, Chief Executive of Horse Racing Ireland, said: “Pat Smullen was a nine-times champion jockey, but his achievements in the saddle pale in comparison to his qualities out of it.

"All our thoughts are with Pat’s wife Frances, children Hannah, Paddy and Sarah, his mum Mary, brothers Ger, Sean and Brian, his close friends and colleagues in the weighroom, trainer Dermot Weld and all the staff at Rosewell House.

"Pat was an inspiration for the selfless way that he faced up to the most awful of diagnoses and his fundraising efforts through Cancer Trials Ireland will benefit many people in the future, The Pat Smullen Charity Raceday will go down in the annals of Irish racing as one of the best days ever at the Curragh.

"For Pat to be taken from us at such a young age is hard to comprehend. His memory will live long wherever horse racing is discussed. May he rest in peace.”

From Rhode in County Offaly, Pat Smullen was one of the finest Flat jockeys of recent generations. He was champion jockey in Ireland on nine occasions, enjoying a tremendous partnership with trainer Dermot Weld. Pat's early career was highlighted by his success in the apprentice championship in 1995 and again in 1996.

He rode his first Group 1 winner on the Tommy Stack-trained Tarascon in the Moyglare Stud Stakes in 1997 and for the next two decades dominated at the very top level, winning the biggest races in Ireland and Britain. His first Classic came in 2001 aboard Vinnie Roe in the Irish St Leger and his greatest day in the saddle came aboard Harzand when winning a thrilling Epsom Derby in 2016. The same horse gave Pat his second success in the Irish Derby at the Curragh later that month, 12 years after his first on Grey Swallow.

Pat’s nerve on the biggest days meant he was a ‘go-to’ big race jockey for many trainers and as well as Irish and English Classics, he also won eight times at Royal Ascot.

Weighroom colleagues acknowledge that his guidance and presence singlehandedly raised standards in Ireland and while Pat didn't ride again after being diagnosed with pancreatic cancer in March 2018 and announced his retirement from the saddle in May 2019, he refused to let his diagnosis define him or deter him.

He was at the centre of a drive by the Irish horse racing and breeding industry over Longines Irish Champions Weekend in September 2019 which culminated in an incredible day at the Curragh exactly one year ago with the Pat Smullen Champions Race for Cancer Trials Ireland.

In line with the Government’s medium-term plan for Living with Covid-19, published last week, from Monday (September 21) owners will be welcomed back to Irish racecourses.

Government guidelines now permit racing and other outdoor events to have a limited number of spectators on the racecourse in addition to those necessary to stage the event. With owners a stated priority for HRI, the decision has been taken to allow two people per owner to attend from next week. Pre-meeting health screening and temperature checking will be required. Full story here: https://bit.ly/3kFazX7

The fixture list for 2021 was announced last week, which will see the overall number of fixtures increasing from the original 2020 figure of 370 to 380 next year.

The list contains 379 meetings at this stage, as one ‘floating fixture’ will be kept in reserve, to be programmed at short notice by the HRI Fixtures Committee at a time when demand for opportunities to run is very high.

There will be an increase of seven turf fixtures (to 339), one being the floating fixture, with the six allocated additional meetings being staged at Gowran Park (Flat, April 8), Kilbeggan (National Hunt, April 22), Punchestown (Flat, September 14), Bellewstown (Flat, September 29 as part of new two-day meeting with a fixture moved from August), Killarney (Flat, October 2 with a fixture also moved from August to create two-day weekend meeting) and the Curragh (Flat, October 26).

These new fixtures have been allocated in industry-focused slots and are targeted at meeting the anticipated requirements of the horse population at that time.