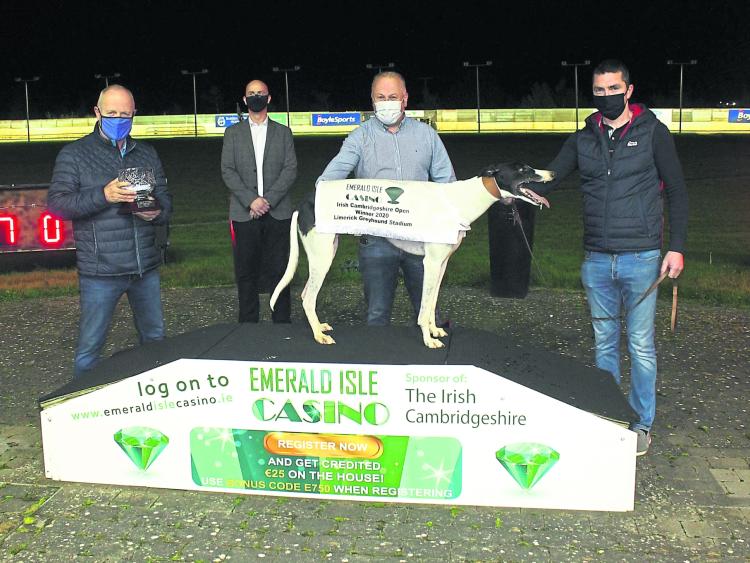 THERE was a new track record set in Limerick last Saturday in the final of the Emerald Isle Casino Irish Cambridgeshire Open 750.

The winner led from start to finish to collect the €5,000 on offer to the winner.

The winner’s time of 41.41 broke the previous record for 750 in Limerick and secured a one length victory in the final, where five lengths separating all six runners at the winning line.

Second home was Ballymac Kingdom for Liam Dowling, while in third was the fast finishing Springwood Vardy for Denis McCarthy.

The night opened with an A3 525. James Kelly won with Gurtnacrehy Guru in a time of 28.77. Half a length back in second was Slippery Joe for Pat Curtin.

See You In Court won for Denis Linehan in a S3/S4 350. The Liam Hayes trained winner had four and a half lengths to spare on the line. The winning sprint win was 18.97. Second was Peters Point, again for Pat Curtin, and owners Michael Murphy and Peter Stackpoole.

The Free State Gang syndicate won with Oisins Choice in an A2 525. In 28.63 the winner was half a length clear on the line. Second was Springwood Joy for Denis McCarthy.

Down An Hour won an A1 525 for John O’Neill. The winning margin was two and a half lengths with a time of 28.83. Second was Inislosky Romeo for William Casey.

Denise Ryan had Done To Ground as an Open S1 350 winner. In 18.83 the sprint winner was a length clear on the line. Second was Caulry River for Mary Ellens Gang syndicate.

Fergal and Evan MacAuliffe won with Drombeg Dream in an A2 525. The winner was three and a half lengths clear after a run of 28.79. Second was Group Bouzouki for Paul Hanley.

Frank and Mary Browne had Mine Claus as an A4 525 winner. Two lengths was the winning magin with a time of 28.93. Beaten into second was Sweet Black for Jack Kelly.

John Kirwan’s Excess Power was an Open A1 525 winner in 28.56. Two lengths back in second was Maireads Brandy for trainer Fraser Black and owner Joe Horan.

The final race of the Saturday card in Limerick was an A3 525. Victory went to Elms Two for trainer Michael O’Meara and owner Martin Butler. The winner was four lengths clear on the line in a time of 28.93. Second was Noahs Belle for Jonathan Deere.

Away from Limerick, the semi-finals of the 2020 BoyleSports Irish Greyhound Derby took place last Saturday night in Shelbourne Park.

The Graham Holland trained Newinn Taylor landed the opening heat in a blistering 29.13.
Ballymac Cooper was second to Newinn Taylor for trainer Liam Dowling. Meenagh Miracle for Michael Corr was third to Newinn Taylor and is 33/1 to win the Derby as the only bitch in the final.

Pestana was the second semi-final winner clocking 29.39. It wasn’t his fastest time in the Derby, but this Owen McKenna trained superstar remains unbeaten in this competition.