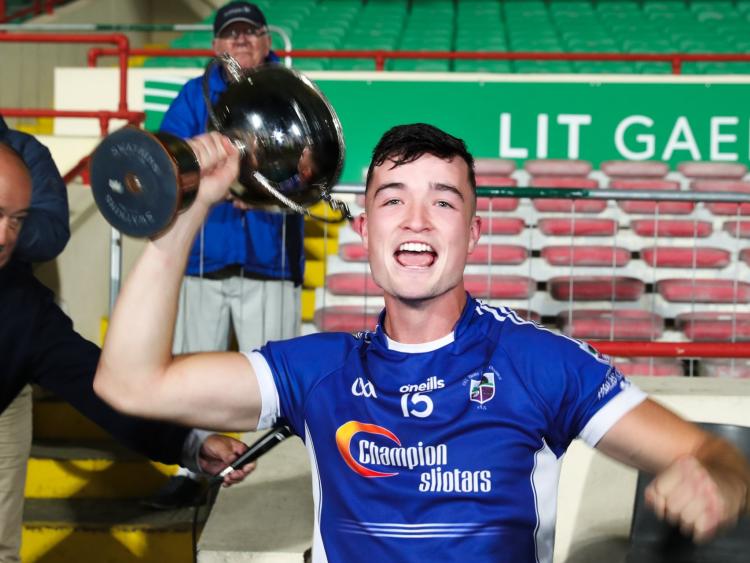 THE first of nine adult Limerick GAA championship titles was won by Kildimo-Pallaskenry.

Only 22 before the end of this year, Hayes is now a county championship winning captain and has already captained Limerick at minor and U21 level.

"I am lucky enough alright," he smiled after defeating Mungret in the LIT Gaelic Grounds final.

And, Hayes turned his attention to the inter-county scene within minutes of lifting the Michael Fox Memorial Cup in the Mackey Stand.

"The hunger is always there. Once the final whistle is gone I am looking to the next thing," he explained.

"We will be back with Limerick and we will have a different championship this year and that's one we want to relish again," he stressed.

What of the club elevation into the senior ranks - their second promotion in four years.

"Once we joined as one in Kildimo-Pallaskenry everything has just progressed so much since then. It was mentioned three or four years ago that we wanted to be senior and we knew we had that ability to get up there. We are finally there and we want to kick-on. We are not just happy to survive," said Hayes.

"It's absolutely unbelievable. It's hard to put into words - we have been fighting for us for the last three years. To finally achieve it is just unbelievable," said Hayes, who scored three points in the 0-22 to 1-13 final win.

"You either win or you learn from it is a saying that I heard a few weeks ago and that is bang on the money. You have to constantly learn from experiences. We are a very young side with a very young average age and that all stood to us like last year. And we showed that tonight because when we went behind with their goal, we managed to dig it out," he said, referencing last year's final defeat after a replay.

"We knew what we were facing - we have played Mungret three or four times in the last three years and they are a great side, really skillful. We knew they would have a purple patch and we just had to respond and we did with a point straight away to try and cancel out the goal as quickly as possible."