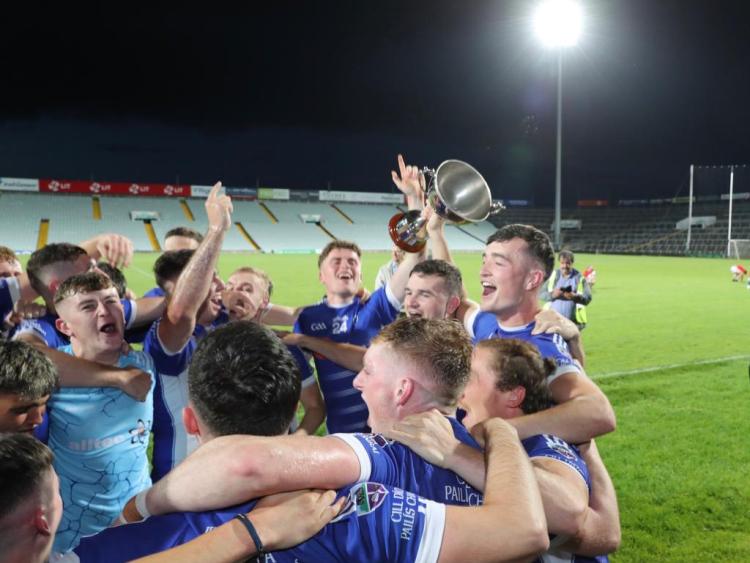 KILDIMO-PALLASKENRY are back into the senior hurling ranks in Limerick for the first time since the 1940s.

This Sunday evening the men in blue defeated Mungret 0-22 to 1-13 in the Lyons of Limerick Premier IHC final in the LIT Gaelic Grounds to secure promotion.

Kildimo-Pallaskenry will take their place in Section B of the Limerick SHC next season alongside Adare, Monaleen, South Liberties, Blackrock and Garryspillane.

Back in 2012, the two clubs (Kildimo and Pallaskenry) in the same parish officially joined forces at adult level after a number of years together at Bord na nOg level as Killulta Gaels. In 2017 Kildimo-Pallaskenry won the Limerick IHC title and now they have won the Premier IHC to move up senior.

Beaten in this final after a replay to Blackrock 12-months ago, Kildimo-Pallaskenry made no mistake this time round with nine of the last 11 scores going their way after the sides had been level on eight occasions.

Not surprisingly, the sides were level, 0-8 each, at half time - Mungret had the aid of the gentle breeze in that half.

It was an opening half in which the teams were level on five occasions.

Niall Mulcahy had the only early score from play with free-takers Liam Griffin and Paul O'Brien dominated as Mungret moved 0-4 to 0-2 ahead after six minutes.

Kyle Hayes was the first Kildimo-Pallaskenry player on the mark from play.

When Shaun Barry and Barry O'Connell joined Hayes on the scoresheet with neat finishes, Kildimo-Pallaskenry were 0-5 to 0-4 ahead at the first half water break on 15-minutes.

Another Griffin free and a second from play from Kyle Hayes had the men in blue 0-7 to 0-5 ahead and Mungret on their way to almost 15-minutes without a score. The men in red hit seven wides in the half - two more than their opponents.

Patrick Begley and Cian O'Brien found scores from play for Mungret down the stretch towards half time after a period of 30-minutes that saw free-taker O'Brien onto five points.

Just two minutes into the second half Mungret had a goal - Patrick Begley finding the net from close range for a 1-8 to 0-9 lead.

Two points from Barry O'Connell in quick succession then moved the men in blue 0-13 to 1-9 clear and just 11-minutes gone in the new half.

Subs Conor Linehan and Brendan Giltenane had Mungret ahead before a third of the final from Kyle Hayes ensured all was level once more.

But then Kildimo-Pallaskenry made the break for the winning line.

Down the home stretch Barry O'Connell brought his tally to five points from play, Kyle Hayes has his third from play,, sub Ruairi Maher hit two and there were also points for Darren O'Connell, Shaun Barry and sub Jack O'Keeffe.