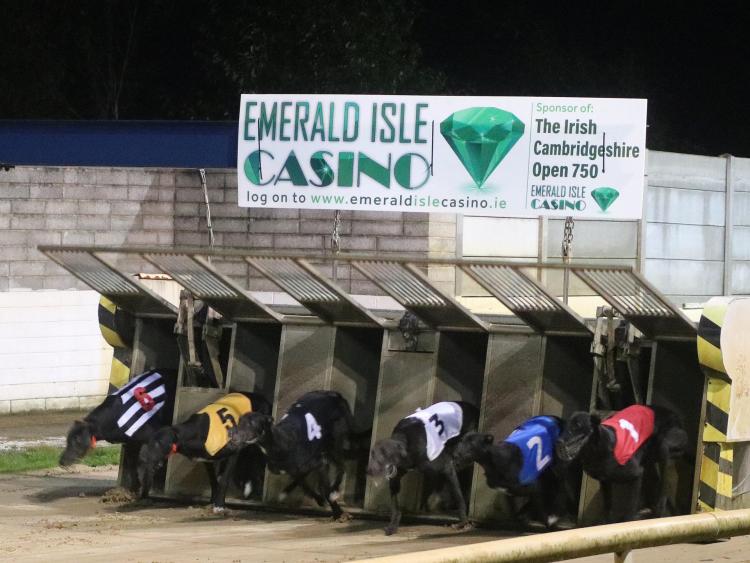 The 750-yard distance event offers over €10,000 in prize money and is now sponsored by Dan Flynn and family in the locally owned Emerald Isle Casino - the virtual casino portal of the Roma Casino, which is situated in the heart of the city on William Street for the past 30 years.

The winner had seven lengths to spare on the line after the 750 in a time of 42-seconds. Beaten into second was Deadly DoLago for Karol Ramsbottom and owner Garry Hannon. Back in third and also into the final was Redzer Ardfert for trainer Brendan Maunsell and owners Pat Reddan and Kathleen Clifford.

In the other semi final, Ballymac Kingdom won for Liam Dowling in 42.13.

The winner had a length to spare on the line. Second was Sporting Pat for Jerry Griffin and owner Micheal Rowe, while completing the final line-up is third placed Springwood Vardy for Denis McCarthy.

Saturday’s card in Limerick opened with an A7/A8 525. Victory went to Rathin Archie for Aidan and Siobhan Bennett. The winning time was 29.86. Three and a half lengths back in second was Snuggie Bolt for Myles Cummins.

Cosard Wonder won for the DGR syndicate in an A5/A6 525. In 29.12 the winner was six and a half lengths clear on the line. Second was Bagsy for John Kelly.

Ronny Wuyts won with Vigorous Tiffany in a novice. The ON2/ON3 525 was won in 29.23. Seven and a half lengths back in second was Keeperhill Tipp for Barbara Rees-Jones and owner Nicholas Colton.

Priceless Jet won for Bryan and Kathleen Murphy and trainer Paul Hennessy in an Open A1 525. The winner was nine lengths clear on the line thanks to a run of 28.31. Second was Cash Is King for Brendan Maunsell and the Smart Teacher syndicate.

Breda Hayes had Orlando Aidan as an A3 525 winner. In 29.34 the winner was a length and a half clear on the line. Second was Mystical Luna for Eoin Troy.

Cormac Davern had Mohane Vicky as a sprint winner. The Open S1 350 was won in 19.10. Beaten a length into second was Gunboat Champ for David Hanley.

Cozzys Gem won for trainer Donal Duggan and owners Sean Cosgrove and Stephen Sheedy in an A4 525. The winner was three and a half lengths clear on the line with a time of 29.35. Second was Frost Nixon for Joe Keane.

Sheriff won for the Martins Gang syndicate in an A1 525. The winning time was 28.85. Second, two and a half lengths back, was Tuttles Prince for the Fly Me To The Moon syndicate.

The final race on Saturday was an A2 525. Won in 29.07 and by 10 lengths by Mine All Ready for Frank and Francis Browne. Back in second was Ballynoe Queen for Liam Hayes and Thomas Ryan.